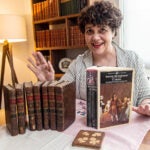 For the past four years, the social justice-oriented troupe the Theater of War has brought together the worlds of ancient Greece and contemporary American Midwest in “Antigone in Ferguson,” created after Black teenager Michael Brown was shot and killed in 2014 by white police officer Darren Wilson.

Dated to 442 or 441 B.C., “Antigone” tells the story of Oedipus’ daughter and her quest to honorably bury her brother Polynices, killed during a civil war, against the decree of her uncle Creon, Thebes’ new king. The play deals with themes of divine justice and human law, family and civic loyalty, and gendered power dynamics. In the Theater of War production, which premiered in 2016, actors perform a staged reading of the work alongside a chorus of community members; the reading is followed by a facilitated public discussion about racism and police violence.

On Friday, Theater of War will mount their second digital performance of “Antigone in Ferguson,” sponsored by Harvard’s departments of Theater, Dance & Media and the Classics, as well as other universities, including Duke and Georgetown. A related artist talk and Q&A session with Bryan Doerries and Phil Woodmore, respectively the show’s artistic director and composer/conductor, will take place Monday and is open to affiliates of Harvard affiliates and other sponsoring institutions.

This week’s production features a one-hour reading of “Antigone” with actors including Tracie Thoms and Nyasha Hatendi, as well as New York Public Advocate Jumaane Williams. The performance also includes music from the “Antigone in Ferguson” choir, led by De-Rance Blaylock, a former teacher of Michael Brown. Doerries and social worker De-Andrea Blaylock-Johnson will facilitate a community panel discussion on the play’s themes and their connection to racism and police violence, with a panel that includes Shamell Bell, a Harvard lecturer on somatic performance and contemporary global performance.

“Michael Brown was not the thug that everyone claimed him to be … he was a kid who just graduated from high school and was ready to take care of business when it came to his life.”
— De-Rance Blaylock

For many involved in “Antigone in Ferguson,” the Theater of War production was personal: Both lead vocalist Blaylock and soloist Duane Foster taught Brown at Normandy High School, where the show premiered.

“His murder took a huge toll on me,” said Blaylock, who now sings professionally in St. Louis. “So when I was given this opportunity to be a part of ‘Antigone in Ferguson,’ I jumped on the chance, because I wanted to let people know that Michael Brown was human. Michael Brown was not the thug that everyone claimed him to be. He was a human being, he was a kid who just graduated from high school and was ready to take care of business when it came to his life.

“To be able to perform Greek mythology and compare it to what happened to Mike is amazing. To hear the responses from so many people around the world and still [be] hearing responses from people who saw our previous performance in August is amazing,” she said. “I’m glad that his name and his life are not, and were not, in vain.”

Naomi A. Weiss, Gardner Cowles Associate Professor of the Humanities, and Debra Levine , a lecturer on Theater, Dance & Media, spearheaded Harvard’s sponsorship of the production. They said they wanted to support a project that engaged audiences with classical texts at the same time it offered an avenue for artistic expression and community engagement on urgent social issues.

“The play itself is so fertile because its messages regarding justice, gender, and death are quite ambiguous. It’s quite difficult to disentangle,” said Weiss, the Gardner Cowles Associate Professor of the Humanities, noting that “Antigone” has been used in many media in the 21st century to explore questions of power and resistance. “I think that’s also what makes the production of ‘Antigone in Ferguson’ potentially very powerful, because it gives rise to these questions of interpretation, which can then hopefully challenge and complicate our views and actions concerning racialized violence and social injustice.”

Weiss highlighted the importance of the chorus, which is made up of educators, police officers, faith leaders, and activists from St. Louis and New York City. While separated by the pandemic, the chorus continued their work over Zoom for the performances, including Woodmore’s powerful hymn “I’m Covered.”

“These sorts of performances are very powerful, precisely because of the chorus. When these plays were originally performed in Athens … the chorus sang, and it danced, and it was made up of community members. So, in the ancient context, there’s a very strong connection between the audience and the chorus,” said Weiss. “It’s striking that ‘Antigone in Ferguson’ not only embraces the musicality and musical potential of the chorus, but also embraces its role as a communal voice and how the audience could have a deep relationship with it. That then works in turn to make the questions the production raises much more powerful.”

Levine added that her department welcomed the chance to share resources to convene an audience for “Antigone” and help ensure that Brown’s life is remembered.

“Theatrical collaborations that include community members and professional actors, that bring in gospel choruses and classical Greeks texts and Q&A conversations, are ways to imagine assembly differently, rather than valuing the work only as a perfectly realized aesthetic object,” said Levine. “I think that letting go of those aesthetic and commercial values and having different goals for what online performance can achieve helps us understand what is and is not successful about digital performance. The best digital performances help us transcend our feelings of isolation during the pandemic.”

“Antigone in Ferguson” is designed to prompt serious and uncomfortable conversations about societal problems, but for Blaylock, it is also a space for healing.

“I dedicate every performance to Mike, because I would not have this platform if it weren’t for his life and death,” she said. “I use my gifts and let people know that even throughout this pandemic, we still have to maintain that there is a little bit of hope left.”