Harvard readies for a different kind of celebration 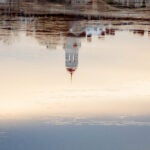 It will be a day to reflect on challenges and triumphs, growth and change. It will be a celebration of accomplishment and the shared commitment to put the wisdom gained to use in making the world a better and more just place. In many ways, the ceremonies honoring this year’s graduates will be familiar if different, and in a year full of surprises there will be yet one more: a red-headed comedian for whom anything goes.

The virtual celebration, Honoring the Class of 2020, will kick off at 11 a.m. on May 28, with the link going live at 10:30 a.m. Welcoming remarks from President Larry Bacow will open the ceremony, followed by orators Michael Phillips ’20 and Sana Raoof ’12, Ph.D. ’18, M.D. ’20. And the Harvard Band, which celebrated its centennial this academic year, will perform.

A conferral of degrees, remarks from Harvard Alumi Association President Alice E. Hill ’81, A.M. ’88, Ph.D. ’91 (whose son, Hamish, is among the honorees), and a musical interlude will lead up to the key address by Martin “Marty” Baron, executive editor of The Washington Post. Baron is widely considered to be one of the most consequential journalists working today. In what may be considered something of a preview, Baron spoke with the Gazette about the current state — and future — of journalism and of its heightened importance in the “fake news” era.

Celebrated cellist Yo-Yo Ma ’76, who has been uploading pieces to YouTube from his home during the period of social distancing, will also give a musical performance.

The College will stream its online program from 12:30 to 1:15 p.m. Former Class Day speaker and Class of ’85 alumnus Conan O’Brien will make an appearance at the celebration, giving a short address during the livestream on some undisclosed topic.

“I don’t dare to predict what students might get out of remarks from Conan,” said Jack Megan, director of the Office for the Arts, of the comedian, writer, and star of the late night talk show “Conan.” “His intelligence, versatility, and lightning fast wit could take us anywhere. But I do know that students will feel his genuine concern for them, for he expressed it so clearly in conversation.

“He said yes to this right from the start. He wants to take a hard moment in their lives and make it a little better. I imagine moments of reflection, irony and laughter. Maybe even a little catharsis. Above all, I know they will sense his generosity.”

The University-wide celebration will feature programs from the individual Schools (visit Honoring the Class of 2020 website for details). Among the highlights will be Harvard Medical School alumnus and NASA astronaut Robert Satcher Jr., who will take the podium for the Medical School and School of Dental Medicine ceremony; founder and director of the Equal Justice Initiative Bryan Stevenson, J.D./M.P.P. ’85, will speak to Law School graduates; and the Business School will begin its Class Day Ceremony at 10 a.m.

This year’s postponement of the annual traditional celebration honoring the graduates is not the first disruption of the event in the long history of the University. Smallpox and other issues canceled the 1752, 1757, and 1764 ceremonies, and British-Colonial tensions stood in the way of public events from 1774 to 1778, and again in 1780. During the Spanish flu epidemic in 1918, degrees were conferred, but again large public gatherings were restricted.

President Bacow said in a statement in March that the decision to delay the ceremonies was made to ensure the health and safety of students, faculty, staff, and family members amid the coronavirusout break. He assured the community that an in-person celebration would be held at a future date when it is deemed safe to gather once again.

For more information, visit the Commencement Office website.  For more coverage of the day, visit the Gazette’s special series page, Honoring the Class of 2020.