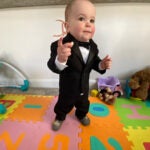 Walking with my baby; an eclectic ‘MixTape’; and taking people back to the ballgame

Two student orators will mark Harvard’s Honoring the Class of 2020, sharing their experiences and perspectives with 32,000 classmates. Harvard College senior Michael Phillips will deliver the Senior English Address while Harvard Medical School student Sana Raoof will deliver the Graduate English Address. The Latin Salutatory is being reserved for the in-person celebration at a later date.

The orators’ slot is considered among the highest honors a student can achieve and involves a selection process that begins in early March, with final auditions in late April. This year’s orators shared the inspiration for their speeches.

Michael Phillips was overlooking the city of Barcelona when the coronavirus pandemic changed what he thought the rest of his senior year was going to be like.

“We were actually all at the top of this mountain that we had just climbed in Barcelona,” Phillips said. It was about 9 p.m. in the Spanish city and a group of students had just gotten to the summit of a hilltop ruin called the El Carmel Bunkers. The semester-long study abroad program put on by the College had already completed its stop in Brazil and was on to Cape Town, South Africa, next. “We’re all just having a great time dancing on top the mountain, taking pictures and stuff. Then that’s when we got the email that they were going to have to send us home. It was like a really big climactic moment that also then just dropped because everybody was just crying.”

The trip was cut short, but it was far from wasted, especially for Phillips who used the time to reflect on his past four years at Harvard. The Baltimore native channeled his reflections into a speech titled “The Keys and the Canvas.”

“As I was kind of going through my reflections, I thought I had something to share in terms of a cohesive story that people can relate to and a message that I thought might be useful,” Phillips said, who was a resident of Leverett House.

The address will focus on his personal growth around how he thought about Harvard coming in as a first-year, to how that perception changed for him and others as pressures to achieve mounted, to him finally circling back to once again seeing it as a place of limitless opportunity by not giving in to self-doubt or imposter syndrome.

“You come into Harvard, and it’s this very abstract space. It’s an idea more than a place,” Phillips said. “You come into it with an idea that this is going to be full of incredible people that change the world and do these amazing things. And it’s true. But you begin to feel the pressures of being around so much talent and the pressures of being around that type of influence.”

Phillips said his speech’s goal is to reorient people, to help them to collectively shake off the self-doubt and fear of imposter syndrome. “We are in one of the greatest institutions in the world and that gives us the opportunity to create such [an] expansive difference,” he said. But if we allow others to dictate the scope of our ambitions and the direction of our lives, we waste not only our own talents, but the opportunities of those whose lives we could have touched, and could have helped.

The title of Phillips’ speech comes from an engraved set of keys his mom gave him when he moved to campus and words of advice his dad gave him about imagining Harvard as a blank canvas. Both are messages he wants to save for the speech itself.

During his four years, Phillips hardly shied away from a stage or chance to lead. The sociology concentrator was on the board of the Harvard Black Men’s Forum, and danced with the Expressions Dance Company and with the fashion and dance show Eleganza.

“Just getting the chance to be on a stage like that and just feel the energy of the stadium and like everybody just cheering and having an amazing time and just being able to be at the center of that, it’s a memory,” Phillips said.

Next, Phillips is on to Chicago to start as an associate consultant at Bain & Company.

Sana Raoof comes from a family of doctors. Her father is a lung doctor. Her mother is a radiologist. Her uncles are doctors. Aunts? Them too. Is it any surprise then that Raoof is also on her way to becoming one?

After eight years, Raoof is graduating from the Harvard/MIT M.D.-Ph.D. program at Harvard Medical School (HMS), where she specialized in radiation oncology. She hopes to treat lung cancer patients and will begin her residency next month at Massachusetts General Hospital. After, she will go to Memorial Sloan Kettering Cancer Center in New York City for her specialty training.

The daughter of Indian immigrants, Raoof’s address will be very much focused on her family and her experience learning from them, especially her grandfather who passed away last June at 96.

“I grew up in Long Island, N.Y., in a multigenerational Indian family: My two grandparents, my parents, and then my brother and I all lived together since I was born,” Raoof said. “My story of how being a child of immigrants has affected my career and kind of all relates back to the strong influence that my grandparents and my parents have had on my life serving as role models — coming to the U.S. with very little and using challenges that came with that as a way to catapult them forward and work, work harder, and be more focused … just be tough people who have a very strong sense of purpose and have done well as physicians and as educators.”

Raoof’s grandfather, Abdul, played a big role in her life until his death and now even after. Her speech is largely about what she learned from him.

“He’s had the most incredible life, starting as an orphan in India and ending up as a Ph.D. from Columbia University who retired as a director at UNESCO [United Nations Educational, Scientific and Cultural Organization],” she said. “I wanted to share the lessons from my grandfather’s life and make some parallels between the challenges he faced and how it made him a stronger person; make parallels between that and the challenges that we face as a society because of this pandemic era, and how we can possibly grow from those challenges. The entire overarching theme of the speech is kind of the theory of evolution: Struggles can make you stronger.”

While he won’t see her graduate, Raoof’s grandfather did see her reach other milestones like her graduating from college, getting married, successfully defending her Ph.D. thesis in 2018, and receiving her white coat from HMS. She takes solace in that.

Harvard’s conferring of degrees ceremony isn’t Raoof’s first Harvard Commencement. She graduated from Harvard College in 2012, where she concentrated in chemistry and physics. She lived in Pforzheimer House (as did her future husband).

Winning the orator competition isn’t the first time she’s been honored either. This year, Raoof was named to the Forbes “30 under 30 list” in health care for her work on anti-tobacco policy and lung cancer research. She helped develop a drug combination for people with drug resistant lung cancer that might prevent that resistance. She’s also provided expert testimony that has led to changes in smoking laws. She became involved in anti-tobacco politics in college and started BreatheStrong in 2010, a class educating K-12 students on cigarettes, their use, and its effects on the body. Other awards she’s won include an excellence in public health service award from the U.S. surgeon general’s office in 2015 and being named a Paul and Daisy Soros Fellow in 2014.

When Raoof leaves Harvard, she’ll have been here since 2008. Now, it’s her brother’s turn, she said. He starts a dual degree program this fall at Harvard Business School and Harvard Kennedy School.

“I’m passing the baton,” she said. “One Raoof leaves and another one enters.”

For more on Honoring the Class of 2020, including a series of profiles showcasing some of Harvard’s stellar graduates, visit the Gazette website.