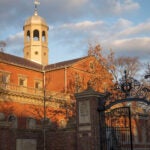 Being honored for 'her remarkable impact around the world, for putting women and girls at the center' of the Gates Foundation’s work

Melinda Gates, co-chair of the world’s largest philanthropic organization and a passionate advocate for improving the lives of women and girls in the U.S. and beyond, will receive the 2020 Radcliffe Medal on May 29, Harvard’s Radcliffe Institute for Advanced Study announced on Wednesday.

In addition to her leadership of the Bill & Melinda Gates Foundation, Gates is the founder of Pivotal Ventures, an investment and incubation company that last year committed $1 billion to expand women’s power and influence in the U.S. over the next decade.

“For most of our history, women’s absence from positions of power and influence wasn’t newsworthy; it was normal,” Gates wrote in Time magazine. “The fact we’re now talking about these inequities is itself a sign of progress. I believe that women’s potential is worth investing in — and the people and organizations working to improve women’s lives are, too.”

“We are honoring Melinda for her remarkable impact around the world, for putting women and girls at the center of the Bill & Melinda Gates Foundation’s work, and for her urgent and ambitious commitment to the unfinished business of empowering women here in the United States,” said Brown-Nagin, also the Daniel P.S. Paul Professor of Constitutional Law at Harvard Law School and a professor of history in the Faculty of Arts and Sciences. “And this celebration is especially fitting as we commemorate the 100th anniversary of the 19th Amendment and consider the work that remains to be done to achieve the promise of full enfranchisement and political empowerment of all women in the United States.”

When Gates and her husband established their foundation 20 years ago, their core principle was that every person deserves the chance to live a healthy and productive life. As Melinda Gates traveled the world, she came to recognize investments in women as a powerful lever to drive societal change. This led her to direct the foundation to develop strategies that prioritize gender equality, including closing data gaps, strengthening advocacy, and supporting women’s economic empowerment.

The Radcliffe Medal is the institute’s highest honor and a highlight of Radcliffe Day, which closes out Harvard’s Commencement week. Past winners include Hillary Clinton, Ruth Bader Ginsburg, Dolores Huerta, and Toni Morrison. This year’s event will mark the 20th anniversary of the Radcliffe Institute’s founding. Inspired by Gates, the program will explore how to expand women’s power and influence in the U.S., in part through a panel titled “Elevating Women: Achieving Gender Equality in the United States.” Arthur Kingsley Porter University Professor Drew Faust, who was founding dean of the Radcliffe Institute and the first woman to serve as president of Harvard, will moderate the discussion. Leaders in higher education, business, advocacy, and government will join her onstage:

Iris Bohnet is the Albert Pratt Professor of Business and Government, academic dean, and co-director of the Women and Public Policy Program at Harvard Kennedy School. She is a behavioral economist and author of the award-winning book “What Works: Gender Equality by Design.” Bohnet advises governments and private companies around the world on how to achieve gender equality in their organizations.

Amanda Nguyen ’13 is the CEO and founder of Rise, a social movement accelerator, and was a 2019 Nobel Peace Prize nominee. Nguyen played an instrumental role in securing the passage of the Survivors’ Bill of Rights Act of 2016 — the 21st bill in modern U.S. history to pass unanimously on the record. Nguyen was named to Forbes’ 30 Under 30 and a Top 100 Leading Global Thinker by Foreign Policy.

Gina Raimondo ’93 is the governor of Rhode Island — the first woman elected to that office — and was the second-ever woman to chair the Democratic Governors Association. Before entering politics, she co-founded an investment company that was involved in dozens of successful start-ups.

Following the panel discussion, Gates will engage in a wide-ranging keynote conversation with the investor and philanthropist David Rubenstein.

For more on the Radcliffe Medal and Radcliffe Day 2020, click here.