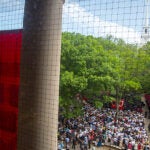 (Five years ago, Ruth Bader Ginsburg, who died Friday at 87, received the Radcliffe Medal, telling a lunchtime crowd under a tent in Radcliffe Yard that she long worked to break stereotypes “that held women back from doing what their talents would allow them to do.” Here’s an account of that day.)

Facts don’t lie. She is the subject of a new American opera with her colleague, Associate Justice Antonin Scalia. She recently had an emoji fashioned after her, Harvard’s Class Day speaker, actress Natalie Portman, is set to play her in a forthcoming biopic. She even has a blog about her life, “Notorious R.B.G.”

To those who have followed her career closely, this development is unsurprising. As an outspoken woman in a male-dominated institution with a razor sharp legal mind, a passion for and devotion to family, a love of regular workouts, and a keen eye for style, (just check her judicial robe’s jabots), Ginsburg has become a role model for women.

Her powerful opinions and dissents are legendary, as is her refreshing candor. When asked recently about occasionally falling asleep during State of the Union addresses, she admitted to being a little tipsy before President Obama’s speech early this year. “I wasn’t 100 percent sober,” Ginsburg told National Public Radio, adding that her colleague, retired Justice David Souter, used to act as her safety net, faithfully giving her a pinch when she started to nod off.

But it’s Ginsburg’s tireless fight for equal rights, her reputation as an exceptional and fearless litigator, her grasp of complicated legal arguments, and her strength and determination in the face of personal adversity that has defined her life and lengthy career.

On Friday, after the pomp and circumstance of Harvard’s 364th Commencement had begun to fade, the capstone annual event to honor both the Radcliffe Institute for Advanced Study and an individual “who has had a transformative impact on society” unfolded under a tent in Radcliffe Yard during Radcliffe Day. Following a morning panel with legal scholars on the major trends and precedents of the U.S. Supreme Court under Chief Justice John Roberts, in addition to the court’s relationship to Congress, Radcliffe Dean Lizabeth Cohen presented Ginsburg with the Radcliffe Medal.

“This year’s Radcliffe medalist is an individual whose life and work represent the values that Radcliffe was founded upon and continues to uphold today,” said Cohen in her introductory remarks. “Ruth Bader Ginsburg, associate justice of the Supreme Court of the United States, has challenged and changed expectations throughout her life.”

Cohen praised Ginsburg for her fight for equal rights for women and her efforts that helped pave the way for women to take on high-profile roles in business, government, the military, and the Supreme Court.

“We are here today to honor how one person — our honoree, Ruth Bader Ginsburg — knocked on closed doors, opened them, and held them open for others.”

Born in Brooklyn, N.Y., in 1933, Ginsburg had an early life defined by a love of learning. A gifted student, she attended Cornell University, and later Harvard Law School as one of only nine women in the class of 1956. While at Harvard, Ginsburg cared for her young daughter, and her ailing husband Marty, who was diagnosed for testicular cancer. (He died from metastatic cancer in 2010.)

Later, she left Harvard with her daughter to follow Marty to New York City. There, she enrolled at Columbia Law School, where she graduated in 1959 at the top of her class. She was the first woman to serve on two major law reviews. After being turned down for a clerkship by Supreme Court Associate Justice Felix Frankfurter, as a woman and mother, Ginsburg secured a clerkship with U.S. District Judge Edmund L. Palmieri.

She went on to become a law professor and the co-founder of the Women’s Rights Project at the American Civil Liberties Union. As the project’s chief litigator, she argued several cases before the Supreme Court, securing increased rights for women. She later served as judge for the U.S. Court of Appeals for the District of Columbia. In that role, said Cohen, “She demonstrated a commitment not to generating heat, but to shedding light.”

In 1993, President Bill Clinton appointed her to the Supreme Court.

“What animates all her opinions is an unqualified commitment to fairness and a willingness to grapple with what the founders’ vision of equality means today,” said Cohen.

Former Supreme Court Associate Justice David Souter introduced her, with humorous and heartfelt remarks. The two served together for 16 years and voted alike more often than any other two current justices during their overlapping tenures.

Souter recalled Ginsburg’s first day on the court in 1993. Like his colleague Scalia, Souter said he was a rigorous questioner of lawyers appearing before the court. The two quickly realized they had new, fierce competition in Ginsburg, who “was off the mark with her first question before Justice Scalia and I had our mouths open.”

At one point, remembered Souter, Scalia whispered to him: “You and I may have asked our last question in this courtroom.”

Preparing for his introductory remarks, Souter returned to the notes he’d made from the arguments the court had heard and the discussions the members of the court had had during Ginsburg’s first week almost 22 years ago. Quoting himself, he read: “I can’t reserve caution in my delight with Ruth.”

During the event, Kathleen Sullivan, J.D. ’81, former professor of law at Harvard and Stanford University and the former dean of Stanford Law School, walked Ginsburg back through some of the highlights of her career.

In the 1970s, Ginsburg litigated a number of cases before the Supreme Court that helped to overturn laws that discriminated against women, including Reed v. Reed, a 1971 case that declared sex discrimination a violation of the 14th Amendment. The case involved the estate of a deceased teenager. The boy’s mother, who had long separated from her husband, felt she should be the administrator, but Idaho law said that in such instances males “must be preferred to females.”

“It was the perfect statute to attack as discriminating arbitrarily against the woman,” said Ginsburg. “But what Sally Reed’s case brought home to me … [was that Reed] thought she had suffered an injustice and that the legal system could make it right.”

Ginsburg said she constantly sought to break down traditional male/female stereotypes “that held women back from doing what their talents would allow them to do.” She even challenged laws that privileged women on behalf of men who were unjustly affected, upholding the notion that any type of gender discrimination was unconstitutional. In 1979, she successfully challenged a Missouri law before the Supreme Court that made jury duty service for women optional.

“A law that says ‘women aren’t on our juries unless they volunteer’ is saying that women are expendable; we don’t need them,” said Ginsburg. That kind of law, she added, also deprives women brought to trial of the opportunity to face a jury of their peers.

In reflecting on her work, Ginsburg said her legal successes before the Supreme Court had much to do with the climate of the times. In the 1970s, “a sea change in attitude” saw more women in the workforce, wide access to effective birth control, longer life expectancies, and inflation, which meant a “two-earner family became the ideal.”

“It was that change, which had already occurred in society, that led the court at last to catch up to that change.”

“In one fell swoop, the court made unconstitutional every abortion law in the country … so the court had done it all, and the people who were advocating for a woman’s ability to control her own destiny, they retired, while the opposition mounted. Now they had, instead of having to fight in the trenches state by state … they had this one single target to aim at.”

Sullivan inquired about Ginsburg’s work on the Court, in particular the 1996 United States v. Virginia case that struck down the Virginia Military Institute’s (VMI) male-only admissions policy. Ginsburg, who wrote for the majority in the decision, called the case satisfying, not just for allowing women equal access to the school, but for other reasons.

“For one thing, the VMI faculty was very much in favor of the admission of women. The reason should be obvious. If they could include women in their applicant pool, they would upgrade the quality of their students.”

Discussing collegiality on the court and her famous friendship with conservative Justice Scalia, Ginsburg said that while they have different views on how the Constitution should be interpreted, they both respect and revere the court, saying they were “different in our beliefs, but one in our reverence for the federal judicial system.”

Ginsburg even offered the crowd a preview of the libretto for “Scalia/Ginsburg.” To Scalia’s aria, which includes the lines “the justices are blind, how can they possibly spout this, the Constitution said absolutely nothing about this,” the stage Ginsburg replies, “You are searching for bright-line solutions to problems that don’t have easy answers. But the great thing about our Constitution, it can evolve.”

She also said, to cheers from the crowd, that at one point during the opera she comes to the rescue of Scalia, who has been locked up in a dark room for excessive dissenting, by “entering through a glass ceiling.”

“There isn’t a glass ceiling that you haven’t broken, Justice Ginsburg,” said Sullivan. “Thank you for the inspiration you have given to all of us who are privileged to have benefited from the pathways you have forged in the law.”Asked by Sullivan to offer advice to women today, Ginsburg said: “Fight for the things that you care about, but do it in a way that will lead others to join you.”