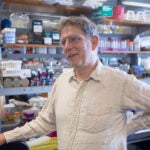 Bringing biology and mathematics together

Former U.S. Secretary of State and presidential nominee honored for her life of service

Former U.S. Secretary of State Hillary Clinton on Friday received the Radcliffe Medal, which annually honors a recipient whose life and work have had a “transformative impact on society.”

Addressing the annual May gathering at the Radcliffe Institute for Advanced Study, departing Dean Lizabeth Cohen presented Clinton with the medal as hundreds of Radcliffe alumnae and Harvard luminaries looked on. Cohen cited Clinton’s extensive career as a lawyer and champion for the rights of women and children, as first lady, as U.S. senator from New York, as secretary of state, and as the Democratic nominee for president in 2016. Clinton was the first woman nominated by a major party for that office.

Prior to receiving her award, Clinton sat down with Massachusetts Attorney General Maura Healey ’92 for a wide-ranging conversation about her life, work, and thoughts on the state of the nation.

Assessing the current situation with North Korea, Clinton said she was hopeful that American officials can regroup after plans for talks between President Trump and North Korean leader Kim Jong-un fell through this week. But she cautioned U.S. leaders to enter into future talks with their “eyes wide open,” ready to “push as hard as possible.”

She recalled that when you’re in the White House situation room, trying to come to an agreement on a difficult decision, you need to have “as much information — dare I say facts and evidence — as you possibly could, in order to advise and then make the best decisions.”

But even with all the best information, “There’s no guarantee that the decision you make will be the right one,” she said, recalling her part in advising President Barack Obama about whether to target the suspected Pakistan hideout of terrorist leader Osama bin Laden in 2011.

“It was by no means a 100-to-nothing decision. And it certainly wasn’t a decision that could be made by the gut of the president,” she said. Instead it was a decision that was made after advisers carefully considered the evidence, assessed the risks, and offered informed opinions. “Of course, the president has to make the decision,” Clinton said. “There is no way that I can imagine important life-or-death decisions being made without that kind of thoughtfulness, and the State Department has a deep reservoir of people with experience.

“I am hoping that people who are currently in the government, not political appointees, will stay as long as they can, fighting for facts and evidence and our values,” she said, “and I hope that people, if they are so motivated, will still go into our government.”

Clinton said she has been inspired by the many women, some of them political newcomers, who have been running for office in recent months, a development that she is supporting through her new political action organization, called Onward Together. She said she also finds the rise of young advocates for common-sense gun-safety laws “thrilling.”

Discussing her early years, Clinton recalled that her mother, who had worked to support herself during high school, was an inspiration “who guided me and picked me back up when I was knocked down.” She urged her listeners to think about how to “develop empathy and kindness in our children, for themselves and for others.” She also urged her listeners to speak up and speak out, encouraging them to defend the importance of a free press and higher education, to vote in “every election, not just for the national election,” and to “find an issue that you really care about and go deep and go long.”

“We are living through a time when fundamental rights, civic virtue, freedom of the press, even facts and reason, are under assault like never before, but we are also witnessing an era of new moral conviction, civic engagement, a sense of devotion to our democracy and our country,” she added in closing remarks.

During the afternoon session, Madeleine Albright, who from 1997‒2001 was the first woman to serve as secretary of state and was also the 2001 Radcliffe Medalist, praised Clinton for her dedication and devotion to the country. “She takes seriously the words that symbolize what this country’s all about,” Albright said, “that all men and women are created equal, and that our shared purpose should be about liberty and justice for everyone regardless of race, creed, gender, sexual orientation, or whether someone arrived in this land as an immigrant or refugee.”

Radcliffe Day was also something of a prelude to farewell for Cohen, who is stepping down as dean on June 30 after leading Radcliffe since 2011. During her tenure, Cohen helped re-envision the institute’s academic mission, bringing experts from myriad disciplines to engage with the Harvard community. She also oversaw a range of physical improvements to the campus, helped integrate the arts further into programming and campus life, and led the Radcliffe Campaign, the institute’s branch of Harvard’s capital campaign, which raised $87 million.