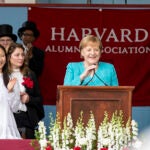 She is the woman responsible for the rallying cry that mobilized generations to fight for social justice since it was adopted as the United Farm Workers of America slogan in 1972. And she was in Cambridge on Friday, leading another appeal for solidarity and change.

“Who’s got the power?” 89-year-old activist Dolores Huerta asked a crowd gathered under a tent in Radcliffe Yard as Radcliffe Day came to an end. “We’ve got the power!” her audience shouted back. “What kind of power?” Huerta wanted to know. “People power!” her listeners roared.

The call and response brought to life Huerta’s operating ethos, “the power is in our person,” and she urged those in attendance to get involved to help combat the nation’s rising inequality. “We have the responsibility to become activists,” she said, adding, “all of us have a lot of work to do still.”

The labor organizer and civil rights icon was honored at the Radcliffe Institute for Advanced Study, receiving the Institute’s highest award, the Radcliffe Medal, for her more than 60 years of work dedicated to justice and equality for millions of marginalized people.

“She has fought for the rights of laborers and Latinos,” said Radcliffe Dean Tomiko Brown-Nagin in her introductory remarks. “She has been a powerful voice for environmental protection, for women’s rights, for voting rights, for LBGTQ equality, and so much more. She is truly a visionary leader and a tireless advocate for equality. In Dolores’ story we see how one person moved to action has in turn inspired and empowered many others to know their own strength and to do the same.”

The afternoon included the awarding of the medal and a conversation between Huerta and journalist Soledad O’Brien ’88. Under a tent in Radcliffe Yard during a celebration that doubles as a reunion for hundreds of Radcliffe graduates, Huerta touched on a range of topics, including her devotion to fighting injustice, balancing raising 11 children with her organizing work, and the need to keep pressing for change.

Reflecting on her efforts to help organize a national boycott of grapes to protest the abusive practices of grape growers in 1965, Huerta said today’s food-justice movement needs to take a similar approach. “It’s got to be the same kind of a campaign, so that you can get every school, every community group, every church, all of these organizations that are established to also talk about food justice.”

She said the initial impulse to get involved in organizing struck in the 1950s when she was a teacher and young mother of two living in California. Seeing so many students arriving hungry and barefoot to class inspired her to want to fight for economic inequality by helping to organize farmers and farm workers. “I was very limited in what I could do [in class],” said Huerta, “but in organizing the parents of the children, that’s a way to make [change] happen.”

In 1955 she helped start the Stockton, Calif., branch of the Community Service Organization (CSO) that helped mobilize working-class Mexican Americans in urban areas. In 1960 she co-founded the Agricultural Workers Association, where she helped set up voter registration drives and pressed for local government reforms to aid migrant workers. Two years later, Huerta, along with like-minded activist César Chávez and others, founded the National Farm Workers Association, today known as the United Farm Workers, a labor union that champions legislative and regulatory reforms for farm workers.

A gifted lobbyist and skilled negotiator, Huerta helped secure state-backed disability insurance and aid for the families of farm workers in California in 1963. She was also instrumental in the enactment of the Agricultural Labor Relations Act of 1975, the first law of its kind in the U.S., granting farm workers in California the right to collectively organize and bargain for better wages and working conditions.

Asked by O’Brien how she honed her negotiating skills, Huerta said she did two things: She asked other, more experienced labor organizers how they did it; and she pretended she knew how to do the work, “just like the guys do.”

After meeting Gloria Steinem in 1965 Huerta began to press for gender equity within the farm worker’s movement and became a vocal advocate for women’s rights. She has long supported campaigns to get more women — especially more Latina women — to run for public office, and continues to advocate for women, children, and the working poor.

Today Huerta is the president of the Dolores Huerta Foundation, which, according to its website, is “a community benefit organization that organizes at the grassroots level, engaging and developing natural leaders.” Among her many honors are the Eleanor Roosevelt Award for Human Rights and a Presidential Medal of Freedom.

Before the luncheon, Huerta toured a “Marketplace of Ideas” in Radcliffe’s sunken garden featuring representatives from a range of groups tackling inequities in the nation’s food system. At the Food Project table Huerta signed autographs, posed for pictures, and chatted with the group’s director of development, Lisa Jurras-Buchanan.

“It was an honor to speak with her,” said Jurras-Buchanan. “She has been a highly inspiring and motivating factor for a lot of the work of the Food Project.” 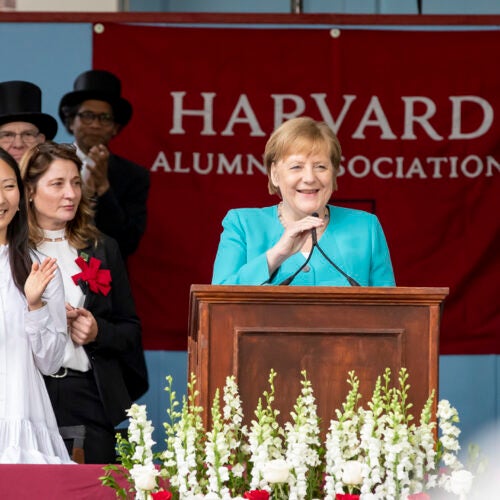 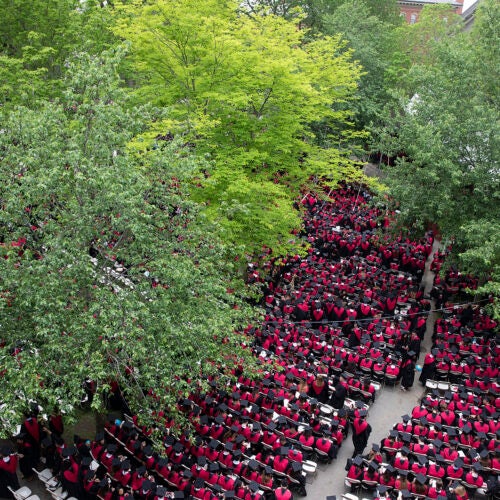 Snapshots from Harvard's celebratory 368th Commencement, from dawn to dusk