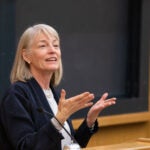 This is part of our Coronavirus Update series in which Harvard specialists in epidemiology, infectious disease, economics, politics, and other disciplines offer insights into what the latest developments in the COVID-19 outbreak may bring. </em>

Government-imposed quarantines, a shutdown of outbound flights and trains, and locked-down cities in China slowed down the new coronavirus but didn’t stop its surge across the world, and the time has come for the global community to brace for a worldwide disease spread, said a Harvard epidemiologist.

“The infectious-disease epidemiology community and policymakers have come to the conclusion that it’s very likely that this virus is going to continue spreading throughout the world over time,” said Michael Mina, assistant professor of epidemiology at the Harvard T.H. Chan School of Public Health. “Things have really shifted a little bit from trying to stop its spread in China to now saying, ‘What can we, as a global community, as individual nations, and even as individual hospitals, do to prepare for what seems more and more potentially inevitable that we will start seeing cases locally throughout the world?’”

Mina participated in a Facebook Live event on Wednesday sponsored by The Forum at Harvard T.H. Chan School of Public Health and PRI’s “The World.” Mina and “The World” reporter Elana Gordon discussed the latest updates on the pneumonia-like illness that has sickened more than 75,000 around the world since it originated in Wuhan, a city of 11 million in China, in December. In late January, the World Health Organization (WHO) declared the coronavirus outbreak a “global health emergency.”

WHO’s Feb. 20 situation report said 75,765 cases have been confirmed, and the number of deaths has surpassed the 2,000 mark. The virus has been found in 27 countries, with more than 74,000 cases in China. The second-highest number of cases, 634, was found on the Diamond Princess cruise ship. According to WHO and the Centers for Disease and Control Prevention (CDC), there have been 15 confirmed cases in the U.S.

The number of daily confirmed cases in China spiked last week due to a change in the definition of what could be officially counted, said Mina. Before the change, confirmed cases were reported only after a positive molecular diagnostic test called PCR, but as resources became stretched in China additional clinical diagnostic criteria were allowed, including scans of lungs that can reveal coronavirus-infected pneumonia. After the adoption of the new protocol, totals skyrocketed from about 2,000 to 15,000 between Feb. 11 and Feb. 12.

“The moment the definition changed, the cases that had been clinically apparent to be coronavirus were allowed to be counted, and all of a sudden, in one day, there were about 14,000 new cases,” said Mina. “But it was really a reporting issue, and the number has subsided. Now it’s really a combination of both the molecular tests and the clinical cases being reported together.”

“The numbers we’re getting still might be the tip of the iceberg,” said Mina. “The most likely situation is actually that there are many, many more people getting infected in China than are being reported, and that’s just because it’s a strained health system. That, I think, is maybe the critical piece of information that continues to remain unknown in this epidemic.”

Researchers around the world are racing to develop a vaccine against the novel coronavirus. Efforts are focused on creating an antiviral drug that can block the spike protein, a piece of the virus that binds to a human cell, which could prevent replication in the host, said Mina.

New advances in vaccine technology make Mina optimistic about a coronavirus vaccine, which could be ready to start a phase one clinical trial in patients in the spring or early summer. But he cautions that it might not available to a wider audience until next year.

For now, the public should continue exercising basic precautions: wash your hands frequently, avoid touching your face, and quarantine yourself if symptoms develop. Mina also warned against falling prey to unfounded fears of contracting the virus in Chinese restaurants. “There have been a lot of unfortunate reports of people being afraid of going to Chinatown,” he said. “We should not be afraid that there is an excess risk when you go to Chinatown.”