Disinfecting your hands with ‘magic’ 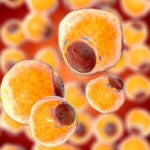 Nanosafety researchers at the Harvard T.H. Chan School of Public Health have developed a new intervention to fight infectious disease by more effectively disinfecting the air around us, our food, our hands, and whatever else harbors the microbes that make us sick. The researchers, from the School’s Center for Nanotechnology and Nanotoxicology, were led by Associate Professor of Aerosol Physics Philip Demokritou, the center’s director, and first author Runze Huang, a postdoctoral fellow there. They used a nano-enabled platform developed at the center to create and deliver tiny, aerosolized water nonodroplets containing non-toxic, nature-inspired disinfectants wherever desired. Demokritou talked to the Gazette about the invention and its application on hand hygiene, which was described recently in the journal ACS Sustainable Chemistry and Engineering.

GAZETTE:  Give us a quick overview of the problem you’re trying to solve.

GAZETTE: Diarrheal diseases are big killers of kids, too.

GAZETTE: What’s wrong with how we sanitize our hands?

DEMOKRITOU: We hear all the time that you have to wash your hands. It’s a primary measure to reduce infectious diseases. More recently, we’re also using antiseptics. Alcohol is OK, but we are also using other chemicals like triclosan and chlorhexadine. There’s research linking these chemicals to the increase in antimicrobial resistance, among other drawbacks. In addition, some people are sensitive to frequent washes and rubbing with chemicals. That’s where new approaches come into play. So, within the last four or five years, we’ve been trying to develop nanotechnology-based interventions to fight infectious diseases.

GAZETTE: So the technology involved here — the engineered water nanostructures — is a couple of years old. What’s new is the application?

DEMOKRITOU: We have the tools to make these engineered nanomaterials and, in this particular case, we can take water and turn it into an engineered water nanoparticle, which carries its deadly payload, primarily nontoxic, nature-inspired antimicrobials, and kills microorganisms on surfaces and in the air.

It is fairly simple, you need 12 volts DC, and we combine that with electrospray and ionization to turn water into a nanoaerosol, in which these engineered nanostructures are suspended in the air. These water nanoparticles have unique properties because of their small size and also contain reactive oxygen species. These are hydroxyl radicals, peroxides, and are similar to what nature uses in cells to kill pathogens. These nanoparticles, by design, also carry an electric charge, which increases surface energy and reduces evaporation. That means these engineered nanostructures can remain suspended in air for hours. When the charge dissipates, they become water vapor and disappear.

Very recently, we started using these structures as a carrier, and we can now incorporate nature-inspired antimicrobials into their chemical structure. These are not super toxic to humans. For instance, my grandmother in Greece used to disinfect her surfaces with lemon juice — citric acid. Or, in milk — and also found in tears — is another highly potent antimicrobial called lysozyme. Nisin is another nature-inspired antimicrobial that bacteria release when they’re competing with other bacteria. Nature provides us with a ton of nontoxic antimicrobials that, if we can find a way to deliver them in a targeted, precise manner, can do the job. No need to invent new and potentially toxic chemicals. Let’s go to nature’s pharmacy and shop.

At this point, these engineered structures are carrying antimicrobials and are charged, and we can use the charge to direct them to surfaces by applying a weak electric field. You can also release them into the air — they’re highly mobile — and they can move around and inactivate flu virus, for example.

GAZETTE: How would this work with food?

DEMOKRITOU: This nano-enabled platform can be used as an intervention technology for food safety applications as well. When it comes to disinfecting our food, we’re still using archaic approaches developed in the ’50s. For instance, today we put our fresh produce into chlorine-based solutions, which leave residues that can compromise health. It leaves behind byproducts, which are toxic, and you have to find a way to deal with them as well.

Instead, you can use the water nanoaerosols that contain nanogram levels of an active ingredient — nature-inspired and not toxic — and disinfect our food. Currently, this novel invention is being explored for use — from the farm to the fork — to enhance food safety and quality.

GAZETTE: So when you use it on food, you would essentially spray the nanoparticles onto a head of lettuce, for example?

DEMOKRITOU: It depends on the application. You can put this technology in your refrigerator, and it will kill microbes on food surfaces and in the air there and improve food safety. It will also increase shelf life, which is linked to spoilage microorganisms. You can also use this technology for air disinfection. The only thing you need is 12-volt DC, which you can power from your computer USB port. Imagine sitting on a train and you generate an invisible shield of these engineered water nanostructures that protects you and minimizes the risk of getting the flu.

GAZETTE: If you’re on the train with a bunch of sick people?

DEMOKRITOU: Exactly, or on an airplane, anywhere you have microorganisms. Most planes recirculate the air, and all it takes is one sick guy — he doesn’t have to be sitting next to you — to get sick. Unfortunately, that’s a big problem. The newer airplanes have filtration to remove some of these pathogens. But this is a very versatile technology that you can pretty much take with you.

DEMOKRITOU:  We know hand hygiene is very important, but in addition to the drawbacks of washing with water or using chemicals, the air dryers commonly used in the bathroom environment can aerosolize microbes and put them back in the air and even back on your hands. So there is room to utilize these engineered water nanostructures and develop an alternative that is airless and waterless — because it uses picogram levels of water, your hands will never get wet.

GAZETTE: So you’re washing your hands, using water. But they don’t get wet?

DEMOKRITOU: Exactly. And it disinfects hands in a matter of 15–20 seconds, as indicated in our recently published study.

GAZETTE: As far as an application goes, do you see something similar to the hand driers we all use at highway rest stops? Only, when you stick your hands in, it doesn’t blow? Do you feel anything at all?

GAZETTE: So how do people know anything’s happened? As humans we want some sort of stimulation.

DEMOKRITOU: We could put a light and music to entertain people, but nobody can see a 25-nanometer particle. We are excited to see that there is interest from industry to pursue commercialization of this technology for hand hygiene. We may soon have an airless, waterless apparatus that can be used across the board, though not necessarily in the bathroom environment. This can be a battery-operated device, it can be placed around airports and other spots where people don’t have time or access to water to wash their hands. 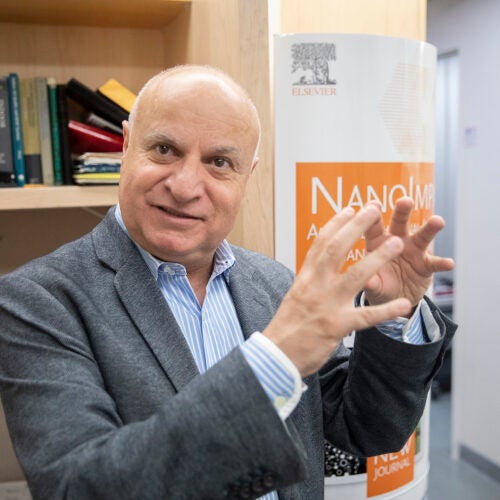 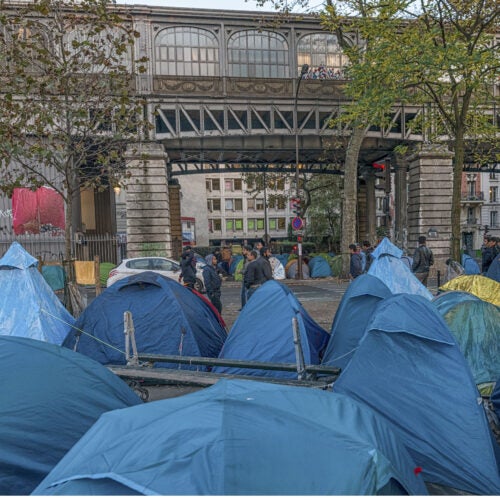