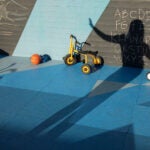 Call it a serendipity dividend. A big one.

Kang-Kuen Ni set out to do something that had never been done before. The Morris Kahn Associate Professor of Chemistry and Chemical Biology and of Physics and a pioneer of ultracold chemistry had built a new apparatus that could achieve the lowest temperature chemical reactions of any currently available technology. Then she and her team successfully forced two ultracold molecules to meet and react, breaking and forming the coldest bonds in the history of molecular couplings.

While they were doing that, something totally unanticipated and important also happened.

In such intense cold — 500 nanokelvin, or just a few millionths of a degree above absolute zero — the molecules slowed to such sluggish speeds that Ni and her team saw something no one has ever seen before: the moment when two molecules meet to form two new molecules. In essence, they captured a chemical reaction in its most critical and elusive act.

“Because [the molecules] are so cold,” Ni said, “now we kind of have a bottleneck effect.”

Chemical reactions are responsible for literally everything: from making soap, pharmaceuticals, and energy to cooking, digesting, and breathing. Understanding how they work at a fundamental level could help researchers design reactions the world has never seen. Maybe, for example, novel molecular couplings could enable more-efficient energy production, new materials like mold-proof walls, or even better building blocks for quantum computers. The world offers an almost infinite number of potential combinations to test.

And Ni’s lab appears to have a head start on the enabling technology.

“Probably in the next couple of years, we are the only lab that can do this,” said Ming-Guang Hu, a postdoctoral scholar in the Ni lab and first author on their paper published this month in Science.

It all began five years ago when Ni set out to build her new apparatus. She wasn’t sure what it would yield, but thought it might tell them something new about atoms, molecules, and chemical reactions. And that wasn’t the only uncertainty:She couldn’t be sure her intricate engineering with what superficially appears to be a chaotic mass of lasers would work.

In her previous work, Ni used colder and colder temperatures to forge molecules from atoms that would otherwise never react. Cooled to such extremes, atoms and molecules slow to a quantum crawl, their lowest possible energy state. There, Ni can manipulate molecular interactions with utmost precision. But even she could only see the start of her reactions: Two molecules go in, but then what? What happened in the middle and the end was a black hole only theories could try to explain.

Chemical reactions occur in just a thousandth of a billionth of a second, better known in the scientific world as a picosecond. In the last 20 years, scientists have used ultra-fast lasers like fast-action cameras, snapping rapid images of reactions as they occur. But they can’t capture the whole picture. “Most of the time,” Ni said, “you just see that the reactants disappear and the products appear in a time that you can measure. There was no direct measurement of what actually happened in the middle.” Until now. 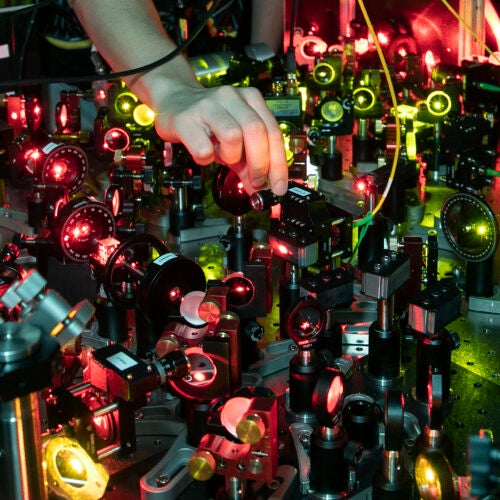 Ni’s ultracold temperatures force reactions to a comparatively numbed speed. When she and her team reacted two potassium rubidium molecules — chosen for their pliability —the ultracold temperatures forced the molecules to linger in the intermediate stage for mere millionths of a second. So-called microseconds may seem short, but that’s millions of times longer than ever achieved, and enough time for Ni and her team to investigate the phase when bonds break and form — in essence, how one molecule turns into another.

With this intimate vision, Ni said she and her team can test theories that predict what happens in a reaction’s black hole and confirm if they got it right. Then, she can craft new theories, using actual data to more precisely predict what happens during other chemical reactions, even those that take place in the mysterious quantum realm.

Already, the team is exploring what else they can learn in their ultracold test bed. Next, for example, they could manipulate the reactants, exciting them before they react to see how their heightened energy impacts the outcome. Or they could even influence the reaction as it occurs, nudging one molecule or the other. “With our controllability, this time window is long enough, we can probe,” Hu said. “Now, with this apparatus, we can think about this. Without this technique, without this paper, we cannot even think about this.”