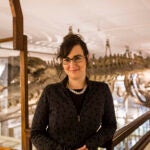 Before cancer kills, it cheats

In terms of size, it may be the smallest scientific breakthrough ever made at Harvard.

Harvard Assistant Professor of Chemistry and Chemical Biology Kang-Kuen Ni and colleagues have combined two atoms for the first time into what researchers call a dipolar molecule. The work is described in a new paper published in Science.

Researchers say the discovery holds great promise for the future of quantum computing, as the dipolar molecule constitutes a new type of qubit, the smallest unit of quantum information, which could lead to more-efficient devices.

“The direction of quantum information processing is one of the things we’re excited about,” Ni said. “We need molecules for all different applications in our daily lives. However, the molecular space is so huge, we cannot sufficiently explore it with current computers. If we have quantum computers that could potentially solve complex problems and explore molecular space efficiently, the impact will be large.”

While developing those molecules — and the computers that could take advantage of them — will demand much more research, the current findings demonstrate a level of precision work not previously achieved.

Atoms become a molecule when they are bonded together to create a chemical reaction; molecules are ultimately the building blocks of chemistry and life itself. Laboratories in the past have created molecules by combining clusters of atoms, and the reactions were then measured in terms of averages. The goal was to gain additional insights on how molecules interact, and to enable controls for reaction chemistry and design new quantum materials.

The team led by Ni, however, began with just two atoms, one sodium and one cesium, which were cooled to extremely low temperatures where new quantum phases beyond gas, liquid, and solid would emerge. Researchers then captured the atoms using lasers and merged them in an optical dipole trap. While the two atoms were in an “excited state” — that is, electrically charged by the laser — the reaction to create a molecule could occur.

“It’s true that for every reaction,” Ni said, “atoms and molecules combine individually at the microscopic level. What we have done differently is to create more control over it. We grab two different species of individual atoms with optical tweezers and shine a pulse of laser to bind them. The whole process is happening in an ultra-high vacuum, with very low air density.”

Though short-lived, the reaction proved that a molecule could form by using the laser stimulus, rather than additional atoms, as the catalyst.

Ni said a further step would be to combine atoms in a “ground,” or not electrically excited, state, with the goal of creating longer-lived molecular reactions. The hope, she added, is that if one dipolar molecule can be created in the lab, bigger and more complex ones can be, too.

“I think that a lot of scientists will follow, now that we have shown what is possible,” Ni said. “This study was motivated by a few different things. In general, we are interested in a fundamental study to see how physical interaction and chemical reaction contribute to making phenomena complex. We wanted to take the simplest case, the laws of quantum mechanics, which are the underlying laws of nature. Our quantum pieces will then build up to something more complex; that was the initial motivation. Certainly the work is not finished, but this is one breakthrough step.”

This research was supported with funding from the Arnold and Mabel Beckman Foundation, the AFOSR Young Investigator Program, the National Science Foundation and the Alfred P. Sloan Foundation.