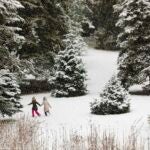 In defense of winter

The Harvard Allston Land Company (HALC) has designated Tishman Speyer to be the preferred developer for the initial phase of the University’s Enterprise Research Campus (ERC) in Allston. Led by president and CEO Rob Speyer, Tishman Speyer is a global developer of large, complex, mixed-use projects, and is best known for innovative approaches to architecture, place-making, interior design, sustainability, healthy live-work environments, and leading-edge tenant amenities.

“Tishman Speyer will bring to Allston a wealth of experience shaped by extraordinary work around the world, and we look forward to the further development of the Enterprise Research Campus,” said Harvard President Larry Bacow. “The convergence of art, business, and engineering in a new urban district will create opportunities for creativity and innovation that will drive achievements in research that none of us can imagine.”

The architect selected to lead the project is Jeanne Gang, M.Arch. ’93, founding principal of Studio Gang, an international architecture and urban design practice based in Chicago, New York, and San Francisco. A MacArthur Fellow who was named one of Time Magazine’s 100 Most Influential People in 2019, Gang has received numerous accolades over the years and was the Architectural Review Woman Architect of the Year in 2017. Tishman Speyer’s previous collaborations with her include residential projects in San Francisco and Brooklyn, as well as the mixed-use Mission Rock neighborhood project in San Francisco. Gang has also done work on the University of Chicago’s campus and on O’Hare International Airport.

The ERC, which will be located on Western Avenue, adjacent to Harvard’s new Science and Engineering Complex and across the street from Harvard Business School, will be a cornerstone of Harvard’s commitment to enhance the area in ways that align with its teaching and research mission. Plans for the campus include a mix of research-focused companies, green space, residences, and a hotel and conference center. The first phase of the 36-acre project will involve a 14-acre portion that has received initial regulatory approval for 900,000 square feet from the Boston Planning and Development Agency.

“Capturing the spirit of innovation of the Enterprise Research Campus, our design will transform a former industrial site into a fertile new ground for the exchange of ideas and creative expression.”
— Jeanne Gang, Studio Gang

Harvard envisions that the ERC will seamlessly integrate into the emerging corridor of creativity along Western Avenue, and that will contribute to a thriving neighborhood that is home to academia and education, engaging public and community spaces, and the arts and sciences in ways that drive economic growth and innovation.

Tishman Speyer was chosen by HALC, the University subsidiary charged with overseeing the ERC development, because its proposal reflected a commitment to many of the goals set out in the initial request for proposals. These include bold and innovative architecture; attention to creating a robust, sustainable public realm; a pledge to include affordable housing that exceeds municipal requirements; a focus on creating a space for life-science and tech startups to flourish; a diverse and experienced development team; and assurances that the firm is committed to ensuring project equity for minority investors.

“The ideas and concepts put forth by the Tishman Speyer team were very much in line with the local Allston community’s, the city’s, and the University’s goals for the neighborhood, as well as being advanced and forward-thinking. Their focus on these shared goals and aspirations will result in an innovative ERC — which will complement the cutting-edge institutional research and teaching taking place at Harvard and throughout the region, and can be integrated into the already-thriving community,” said Nitin Nohria, chair of the HALC board and dean of Harvard Business School.

“From the outset, [HALC chief executive] Tom Glynn and the board members of the Harvard Allston Land Company have presented a clear, compelling, and unique vision,” said Speyer. “This project will combine the best in real estate with the best in science to help entrepreneurs and researchers make life-changing discoveries. And it will do this while supporting the neighborhood’s residents, further strengthening existing businesses, and diversifying the region’s economy.”

Tishman Speyer said it conceives of the ERC as a place that will “celebrate local context, foster human interaction, and stimulate innovation by integrating sustainability, permeability, sensitivity to human scale, and timeless architecture with a robust and meaningful community outreach plan.” The team sees an opportunity to foster “a symbiosis between the ERC’s historic neighbors, the global innovation community, and Harvard’s vision.”

The developer said its plan for the ERC, currently “a blank canvas,” was to create buildings and open spaces configured to simultaneously maximize user comfort and offer a diverse mix of program potential. The firm’s proposal says it will focus on creating social infrastructure that promotes “inclusivity, shared experiences, collaboration and human happiness … where cultural identity is expressed and authentically celebrated.”

One potential building, dubbed the Treehouse, would serve as a welcoming front door to the ERC, and would reimagine the concept of a traditional hotel and conference center as a “hyper-social building for local, regional, and global populations.”

“Capturing the spirit of innovation of the Enterprise Research Campus, our design will transform a former industrial site into a fertile new ground for the exchange of ideas and creative expression. We envision a neighborhood brought to life with low-carbon buildings and resilient green spaces that foster community and connect people to their natural environment,” said architect Gang.

The Tishman Speyer team sees an opportunity to foster “a symbiosis between the ERC’s historic neighbors, the global innovation community, and Harvard’s vision.”

Echoing Harvard’s strong commitment to sustainability and resiliency, Tishman Speyer said the ERC will be designed to be a leader in substantiality and will incorporate a pathway to zero carbon into the design from day one. For instance, the team’s proposal considered sun angles, wind impacts, outdoor climate comfort, and provided an integrated approach to the site plan and land uses, owing to the work of Studio Gang and others.

Tishman Speyer has a strong background in developing sustainable properties. Between 2015 and 2016 it achieved a 6 percent reduction in energy intensity across its entire global portfolio. It has received the distinction of Energy Star Partner of the Year three times, and has more than 74 million square feet of sustainably-certified property across four continents. Each ERC building will be designed to achieve a USGBC LEED Gold rating and will implement extensive sustainability measures, including a master plan design that responds to, and mitigates, solar, wind, noise, acoustic, and environmental impacts.

The developer’s proposal also calls for a dynamic and diverse residential community, with the ability to exceed the city’s affordable housing thresholds and include additional livability elements.

Tishman Speyer said that “true and authentic equity and inclusion” will be the foundation of the team and the project itself. It has assembled a diverse group with broad global, national, and local perspectives, and said it is “deeply committed to a work environment that promotes a diverse workforce, with different views and perspectives, and an expectation that leaders and employers alike demonstrate unflagging support for diversity and inclusion practices.” In fact, it has said that it is committed to allocating 5 percent of the project equity to minority investors. 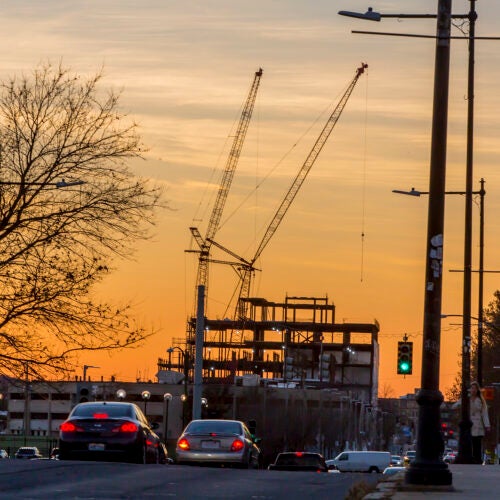 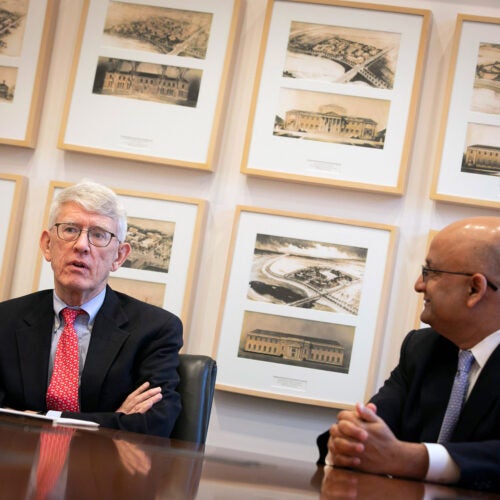 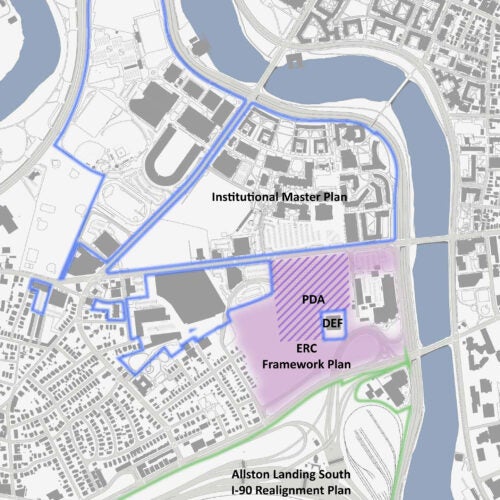 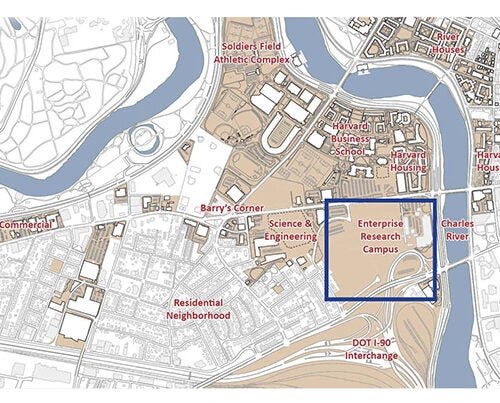 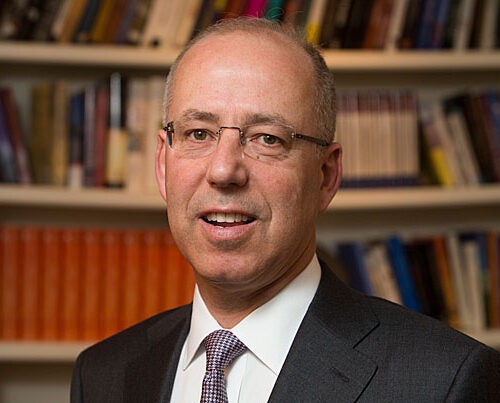 The ERC has roots in a series of discussions that began in 2011. At that time Harvard’s Allston Work Team recommended that the University use some of its available land in the Boston neighborhood to encourage companies, hospitals, partner universities, and others to collaborate on developing an innovative space. A committee was formed in 2014 to explore the issue further, and the idea was soon being described as an innovation district that might contain laboratories, offices, and housing, as well as a previously planned hotel and conference center.

The initial phase of the ERC is consistent with what was outlined during the public process in spring 2018, when the Boston Planning and Development Agency board voted to approve a Planned Development Area Master Plan. The Master Plan described the outcome of an extensive public process, which included significant stakeholder involvement over the course of numerous public meetings. The outcome is the guiding plan for Harvard’s development of the ERC.

The plans are also consistent with past University planning efforts and align with the goals outlined in the city of Boston’s own master plan, “Imagine Boston 2030,” which included the ERC and Beacon Park Yard, the area immediately to the south, among several locations citywide for “expanded neighborhoods.”

Harvard has continued to move forward on significant necessary improvements to infrastructure throughout the area, which will enable future development to occur. Critical structural components such as new roads, stormwater, and utilities will undoubtedly benefit the area for years to come.

The ERC will be located on land that had been occupied by transportation company CSXT.

Harvard first purchased the land from the Massachusetts Turnpike Authority in 2000 and 2003. Throughout the past two decades, Harvard worked with CSXT to execute an agreement resulting in the relocation of the railyard, as well as environmental testing and remediation.

“Over the next several months HALC and Tishman Speyer will be working with the local community, elected officials, and City Hall to develop and refine a project proposal so that it can be shared and formally submitted for review,” said Glynn, HALC’s chief executive. “While a lot of necessary, expected work still remains to be done, we’re incredibly excited about today’s announcement — an important next step in realizing Harvard’s vision for the ERC.”

While the Tishman Speyer team has shared its initial thinking and offered some preliminary thoughts about concepts and designs, there is no formal proposed project at present.

Tishman Speyer has a large, diverse portfolio of projects locally, nationally and across the globe. It currently owns and operates more than 3 million square feet of space in Boston and has two projects in the city’s Seaport district: Pier 4, a mixed-use project, and 105 West First Street, a life-science lab.

Other projects include Rockefeller Center in New York City and the Sony Center in Berlin.

As ERC planning advances, Harvard and the Tishman Speyer team will work collaboratively to recruit idea-intensive businesses that have a natural synergy with the scholarship being produced by Harvard faculty and students in Allston. This will further strengthen and expand partnerships across Greater Boston’s thriving ecosystem of innovation that includes Boston University, MIT, Harvard and other associated teaching hospitals, and innovative companies and investors throughout the region.