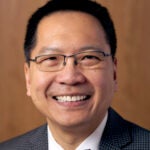 The nearly 350 astronomers, postdoctoral fellows, graduate students, and undergraduates who worked for more than a decade to capture the first-ever image of a black hole have been named the recipients of the 2020 Breakthrough Prize in Fundamental Physics.

That collaboration, dubbed the Event Horizon Telescope, unveiled the image in April. It shows a brightly lit ring of photons being cast off from the super-heated material around the fringes of the black hole at the center of the Messier 87 galaxy.

That ring, EHT Director Shep Doeleman said, represents the “last photon orbit,” or the closest light can get to a black hole before crossing the event horizon, the “point of no return, where nothing — not even light — can escape.”

Receiving the Breakthough Prize, Doeleman said, is a triumph that acknowledges the magnitude of the coordinated effort that was required to make a discovery of this scale.

“To receive the Breakthrough Prize validates all the hard work and dedication of the EHT team,” Doeleman said. “We set out to see the unseeable — we needed to build a telescope as large as the Earth to do it, and we pulled it off. We all thought it was a breakthrough, but now we see that the rest of the world does, too.”

Creating an image of something that even light can’t escape from is no simple feat.

To do it, the EHT group — which spanned 60 institutions in 20 countries — relied on radio telescopes located in Antarctica, Chile, Mexico, Spain, Hawaii, and the continental U.S. After collecting data at each location, the team synchronized it all to within a fraction of a trillionth of a second and then developed new imaging techniques to analyze the results.

The result was the instantly iconic image that reveals what Doeleman called “a one-way door from our universe.”

For Katie Bouman and other members of the EHT team, news of the honor came as a shock.

“It has been an honor to share this experience and the Breakthrough award with the EHT team,” said Bouman, who worked on the project as a post-doc and recently took a position as an Assistant Professor at Caltech. “And the cherry on top of it all has been seeing so many excited and smiling faces from around the world whenever the black hole image is shown and its story told. I hope this picture continues to inspire the next generation of young scientists!”

Michael Johnson, an astrophysicist at the Harvard-Smithsonian Center for Astrophysics, and leader of the EHT Imaging Working Group, agrees.

“The most extraordinary thing about this has been that our first blurry images are just the beginning of what will be decades of work to get sharper images of these black holes,” he said. “Eventually, we will have real-time movies that reveal how these black holes swallow material and power the brightest systems in the universe.”

That first image, said Sara Issaoun, a graduate student who worked on data calibration and processing at the Harvard-Smithsonian Center for Astrophysics (CfA), has opened the door to an entirely new world in the study of black holes and how they work.

“The dark region, the black hole shadow, where light cannot escape, and the bright ring of light emitted by hot gas falling toward the black hole, show an area of extreme gravity, a point of no return,” she said. “This image is only the first step in opening a whole new outlook on black holes via direct imaging, we still have many more questions and many more things we can learn with future results with the EHT.”

“We set out to see the unseeable — we needed to build a telescope as large as the Earth to do it, and we pulled it off. We all thought it was a breakthrough, but now we see that the rest of the world does, too.”
— Shep Doeleman

Beyond recognizing the accomplishment that the image represents, Doeleman said the prize “honors the long game that scientists play: dreaming big, inventing and innovating the way forward, and not giving up.”

“I regret that Albert Einstein and Stephen Hawking were not here with us to enjoy the moment when we first saw the black hole image,” he continued. “The impact of the image resonates across physics and astronomy, but more broadly with the curious public, who connect not just with seeing the most mysterious object in the universe for the first time, but also in the human story of colleagues working together, across borders, to turn our planet into an immense lens. It makes you feel that nothing is impossible.”

Dean of Science and Samuel C. Moncher Professor of Physics and of Astronomy Christopher Stubbs lauded the EHT team’s recognition.

“The EHT team’s accomplishment, imaging the light that bends around a black hole to make its way to telescopes here on Earth, is a technical and scientific milestone,” he said. “I’m thrilled to see their work recognized with a Breakthrough Prize.”

Sometimes called the “Oscars of Science,” the prizes are the richest in the field, with winners receiving $3 million. In addition to physics, prizes are handed out in mathematics and the life sciences.

The new laureates will be recognized at the eighth annual Breakthrough Prize awards gala on Nov. 3 at NASA Ames Research Center in Mountain View, Calif., and broadcast live on National Geographic.