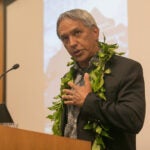 In the annals of science, there are a few images — think the “pale blue dot” captured by Voyager I or Apollo 8’s “Earthrise” — that have both captured the public imagination and offered scientists insight into how the universe works.

The image, the first-ever of a black hole, is destined for the shortlist of iconic images not only for what it can tell astronomers and physicists about how gravity and general relativity work under the most extreme conditions, but also because it captures what EHT Director Sheperd Doeleman called “a one-way door from our universe.”

“This is a real breakthrough,” said Doeleman, a senior research fellow at the Harvard-Smithsonian Center for Astrophysics (CfA). “I think this image could rank up there with those other images because we’re seeing something we never thought we could see.”

More than a century after the existence of black holes was first hinted at in Einstein’s theory of general relativity, the impossibly dense regions of space continue to captivate the public imagination, showing up in movies, TV shows, and science-fiction novels too numerous to name.

Doeleman believes one reason for that is that they have remained shrouded in mystery for so long.

“Einstein himself wasn’t really sure that black holes existed,” he said. “The fact is we’re drawn to things that we don’t understand, because we yearn to know more. They’re terrifying, but we can’t look away.

“And the reason they’re terrifying, the reason this is an important image, is because when you look into the middle of it, you realize that we’ve theorized about these monsters being out there, and now we know they are — and what’s more, now we see them,” he continued. “This is the only place in the universe where the cosmos ties a knot you can’t untie. Every other place in the universe you can, in theory, come back from, but not there.”

“Astronomers have detected many black holes since the 1970s, but in each case, only indirectly,” added Charles Alcock, the Donald H. Menzel Professor of Astrophysics and director of the CfA. “This is the first time we have an image of a black hole itself. This is a remarkable confirmation of more than a century of theoretical work.”

Seeing the image for the first time, Doeleman said, “is pretty heady stuff.”

Years ago, he recalled, while working at MIT’s Haystack Observatory, he was among the first people on the planet to see the first hints of the black hole at the center of the Milky Way.

“This is the first time we have an image of a black hole itself. This is a remarkable confirmation of more than a century of theoretical work.”
— Charles Alcock, CfA director

“I started seeing these very faint detections,” he said, “so I ran some analyses to tighten up the data, and suddenly these detections came out. That was a moment where there was one person — me — in the world who knew what had just happened. That was pretty amazing.”

It was also the moment, he added, that started the modern era of the EHT. “Because as soon as we knew there was something there,” he said, “then the gloves came off and we were ready to start building an Earth-sized array to image it.”

It was in May of last year that the team hit pay dirt.

“We had a conference here at the Black Hole Initiative, and the students and postdocs came and showed me some of the data,” Doeleman said, referring to Harvard’s interdisciplinary center that studies the phenomenon. “We could see the telltale signatures in these data … and we were all just looking at it, saying, ‘Wow.’ I worked until late that night coming up with a model of how big what we were seeing was, and that’s when I knew we had something very, very interesting.”

For Joseph Pellegrino University Professor Peter Galison, the image is similar to the discovery that atoms — the fundamental building blocks of all matter — were not simply theoretical curiosities.

“At the beginning of the 20th century, in a myriad of ways, theorists needed atoms,” Galison said. “When C.T.R. Wilson showed the trails atoms made as they plunged through water vapor, suddenly it was vividly clear that these were real, not just useful fictions.”

Today, he continued, “the scientific object that rivets so many of us — from mathematics and physics to astronomy and philosophy — is the black hole. Again, theory had to have it. Now, for the first time, the black hole is visible, real to us in a way that, when I saw it first take form on the computer screen 10 months ago, knocked me back on my heels. It still does. There it is, right there, the most extreme distortion of space and time imaginable, with a mass six billion times that of the sun, 53 million light years away. And we can see it.”

In the end, Doeleman said, the discovery will be important not just for its status as a scientific first, but also for its place as a signpost, an inflection point where new avenues for study of the cosmos were revealed.

“This opens a new window for study,” he said. “We are now entering the era of precision, horizon-scale observations of black holes. We’ve never had that before, so we’re now able to ask a bunch of questions we couldn’t even conceive of before. We can start teasing apart physical processes at the black hole boundary, so [the significance] is in what we saw, but also in the promise this holds for the future.”