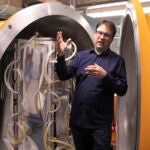 Harvard-trained doctor David Sachar and Brigham and Women Hospital’s pathologist and senior lecturer Noel Rose have been recognized for their contributions to medicine with this year’s Golden Goose Award.

Sachar was recognized for experiments with frog skin that led to the development of oral rehydration therapy, while Rose was honored for using a rabbit to prove that an autoimmune response can cause a human disease.

The award is given each year to scientists selected by a bipartisan committee of congressional supporters and several science societies and organizations. The Golden Goose Award got its name from vocal critics of curiosity-led science, which can lead to transformative benefits to society. In response to claims that federal investments in such research was wasteful, a coalition of business, university, and scientific organizations came together with the American Association for the Advancement of Science (AAAS) in 2012 to recognize the importance of “blue-skies research.” Rep. Jim Cooper (D-Tenn.) championed the idea of the Golden Goose as a fitting analogy, and it stuck.

Though most scientific research is carried out in universities and institutes with their own infrastructure, national funding stimulates exploration and keeps the enterprise competitive. It also saves governments from the financial, political, and social costs of sustaining vast research operations within their own brick-and-mortar facilities.

“Government-funded research is vital for America’s future and the future of the world,” Cooper said in a statement from AAAS. “Taxpayers have received untold benefits from breakthroughs that have lengthened and enriched our lives. Let’s keep progress on track by boosting funding for research!”

When Sachar graduated from Harvard Medical School in 1963, he was so inspired by his class speaker, Nobel laureate Thomas H. Weller, M.D. ’40, that he decided to dedicate his two years of government service to making a difference in the developing world.

“Weller said that if we worked very hard we could advance the average life expectancy of someone in the United States a few years at best,” he recalled. “Then he said that if we spent just one-tenth of those efforts in the developing world, we could advance life expectancy from age 40 to age 60. And I thought, ‘Yes, that is what I am going to do.’”

In places where the water supply is compromised, a large proportion of people who contract cholera die without treatment. The advent of oral rehydration therapy in the 1960s — a simple, low-cost treatment — was a game-changer that saved millions of lives. But it discovery was thanks to a collaboration among people doing seemingly odd things in very different parts of the world.

“I arrived in Dhaka, East Pakistan [now Bangladesh] in 1965, when the prevailing theory was that the cholera toxin poisoned intestinal cells, preventing them from absorbing water back into circulation. That was thought to explain why people lost gallons of fluid in just a few hours, and why so many of them died,” said Sachar.

As a newly commissioned public health officer, Sachar joined Robert Gordon, director of the Clinical Center of the National Institutes of Health (NIH), who was setting up a research laboratory with Navy scientist Robert Phillips. Gordon wanted to investigate the assumption that cholera toxins poisoned the sodium pump that keeps intestinal fluids in balance.

“He said, ‘If the cholera toxin poisons the sodium pump, that should change the normal electric charge in the intestine. Why don’t you measure it?’”

Phillips contacted his colleague Hans Ussing in Copenhagen, who had invented a device to measure electrical charge in tissues. At the time, biologists used the Ussing chamber to study the influences of chemical changes on the electrical charge across a frog skin.

Sachar mastered the device, then adapted the techniques he learned to measure potential across the intestinal wall in an intact human being. He headed back to Dhaka, imported the unwieldy equipment, set up the new system, and successfully measured electric charge in a human patient.

“I came across research from the University of Sheffield. … They had found that if you added sugar to the infusion solution inside [rat] intestine, that would boost the electric potential, presumably by boosting active sodium transport. So I thought, if I’m measuring what I think I’m measuring here, then if we add sugar to the lumen it should raise the potential. So that’s what we did.”

The team found a patient willing to let them try the new technique on his intestinal wall. They set up the device and measured the charge as the patient received a standard electrolyte solution. Then they added sugar to the solution, and saw an immediate change. The patient’s electric potential began to rise dramatically.

“We made two discoveries: our measuring system was good, and the prevailing theory of cholera was wrong,” said Sachar. “The sodium transport system wasn’t poisoned — it responded just the way it was supposed to.” He said it was Norbert Hirschhorn, the lab’s chief of clinical research, who said, “That’s the therapy! We’ll rehydrate patients orally with the sugar, without IV!”

Phillips and other team members opposed moving straight to treatment, because previous experiments along similar lines hadn’t worked. But Hirschhorn insisted it would work if the composition of salts and sugar was just right. The team decided to try an oral treatment, staying with the patients in shifts around the clock. The therapy worked.

“That was the birth of oral rehydration therapy,” said Sachar. “Two years later, two other Public Health Service doctors, Richard Cash and David Nalin, took the treatment out into the field, to mothers and children in rural East Pakistan, and saved a lot of lives.

“We couldn’t have proved it would work without having done those experiments in frog skin. But on the other side of the coin, I could still be tinkering away in a lab in Copenhagen, and those researchers could still be looking at rats in Sheffield, and it wouldn’t mean anything. We did something incredible because we took the science to where the disease was hitting people. It’s that combination of basic and applied research that makes the whole thing work,” said Sachar.

Sachar’s research is credited with having already saved at least 50 million lives worldwide. This award is the first time the basic science behind the treatment has been formally recognized.

Noel Rose, a fellow recipient of the award, was recognized for his exploratory research in the 1950s that changed our understanding of autoimmunity. “A lot of good comes from accidental experiments, where you’re looking for one thing and along the way make a discovery that changes the world,” he said.

Rose’s early work at the University of Buffalo, funded by a cancer immunology grant, investigated a thyroid protein, thyroglobulin, by exploring how rabbits responded to similar proteins from other species. On a hunch, he tested whether a rabbit would respond to thyroglobulin taken from its own body. It did, producing not only antibodies to thyroglobulin in the serum, but severe inflammation of its own thyroid gland. This unexpected finding led to a revolution in the study of autoimmunity.

“My boss, Ernest Witebsky, was sure that I was on the wrong track, because, ‘Everyone knows that’s impossible,’” said Rose. But after looking for every possible alternative explanation, Rose tested samples from patients with Hashimoto thyroiditis and showed that they, too, had antibodies to thyroglobulin.

Rose’s work led to the revelation that more than 80 diseases, including Type 1 diabetes and lupus, are related to an autoimmune response. Since that discovery, new diagnostic tools and treatments have become available, giving hope to millions of patients.

“It’s not an easy time for young researchers, but I do encourage them,” said Rose. “Despite the problems they will encounter, this a career that just gives and gives. You have the privilege of doing work you love, sometimes discovering new things about the world we live in — that is a privilege very few people have.” 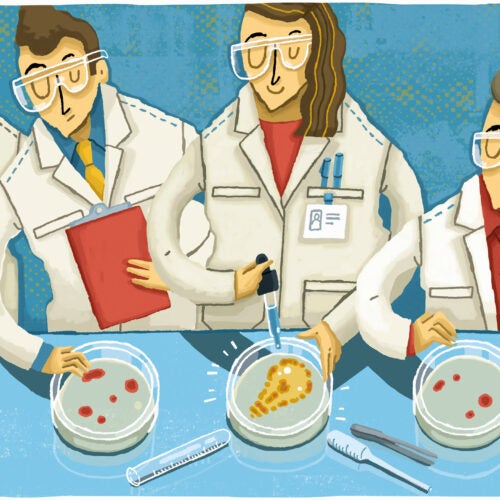