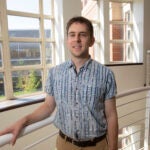 “Being ethical does not require a master’s degree,” he said. “It requires having a conscience and following it.”

Addressing the crowd braving Wednesday’s afternoon chill on the lawn of Baker Library/Bloomberg Center, the former New York City mayor recalled his youth in Medford and his years at Harvard Business School (HBS) — or, as he expressed it, at the Hong Kong and the much-lamented Wursthaus.

“I was always one of those who made the top half of the class possible,” joked the speaker, who also founded Bloomberg L.P. and Bloomberg Philanthropies and serves as the U.N. Secretary-General’s Special Envoy for Climate Action and the World Health Organization’s Global Ambassador for Noncommunicable Diseases. His daughter, Emma, earned her M.B.A. from HBS in 2007.

Bloomberg said it was as a 24-year-old in his first job after earning his M.B.A., at what was then Salomon Brothers & Hutzler, that he learned the importance of both ethics and philanthropy in capitalism. Under the tutelage of managing partner William Rogers “Billy” Salomon, he realized, “When it came to ethics, there was no compromising.”

This principle reaches beyond business, Bloomberg stressed — particularly today, when people are questioning not only our economic system but the fundamentals of our government. “My luckiest break was taking a job out of College where I got to see the ethics I learned growing up put into practice in the workplace,” he said. “But when we look at today’s world, it’s not clear that everyone with a degree in business has those principles. And that’s one reason, I believe, that this great country of ours is suffering from an ethical crisis that is corroding our society.”

Faced with rising income inequality and partisan politics, the public today sees “truth and science being trampled with reckless abandon” and the rule of law “attacked and undermined,” he said. The result is a lack of faith that can foster extremists on both the left and right, he warned.

“More and more Americans — especially in your generation — are questioning whether capitalism is capable of creating a just society,” he said. “Their faith in America and all that we represent is being shaken. If we do not act to restore it, the turmoil in our politics today will be only a prelude of what’s to come, and that could shake the very foundations of our society.”

Part of the answer, he stressed, is regulation. Citing both Teddy Roosevelt’s breaking up of the monopolies and Franklin Delano Roosevelt’s New Deal, he said politics should mute the worst impulses of the business world in order to promote public good.

“I’m as much a capitalist as you will ever find,” he said. “But anyone who believes that unfettered capitalism works hasn’t read history.”

Beyond strengthening laws and regulations to keep the capitalism’s excesses in check, Bloomberg focused on personal responsibility.

Emphasizing fairness in the workforce, he detailed how valuing workers pays off in loyalty and retention, a good act that makes good sense. “Be honest with your colleagues, clients, and contractors,” he said. “Don’t ever try to take advantage of them. And don’t hesitate to speak up when someone else does.”

He urged the graduates to align themselves with companies involved with philanthropy as they move into the business world. Citing his own firm, the speaker noted, “At Bloomberg, philanthropy gives us a competitive advantage in recruiting and retaining talent — and it’s as good for the bottom line as anything a company can do.”

However, he added, philanthropy should not be only a corporate policy. “Give back on your own,” he said. “Don’t wait.”

On the same note, Bloomberg announced that next year, with Bloomberg Philanthropies’ support, HBS will hold an alumni conference on investing in the age of climate change. He called it “another example of where doing right and doing good are aligned.”

Finally, he called on the assembly to make their voices heard through the ballot box. “Elect people who understand that it’s their obligation to make capitalism work for everyone,” he said. “That means picking up where Teddy and Franklin Roosevelt left off and modernizing capitalism for our time.

“America must always be a place where it’s possible to get rich through perspiration and innovation,” he concluded. “But it must never be a place where the middle class steadily loses ground — and where many of those feel trapped at the bottom.” 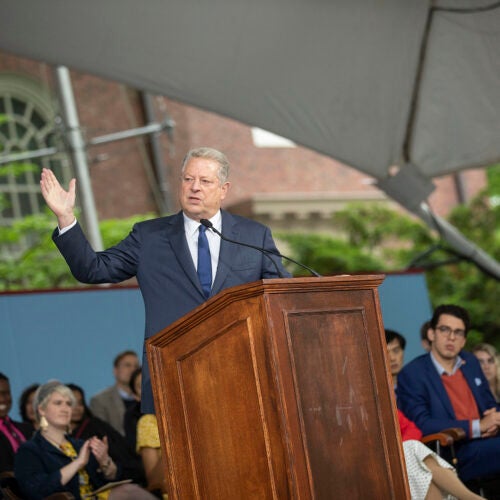 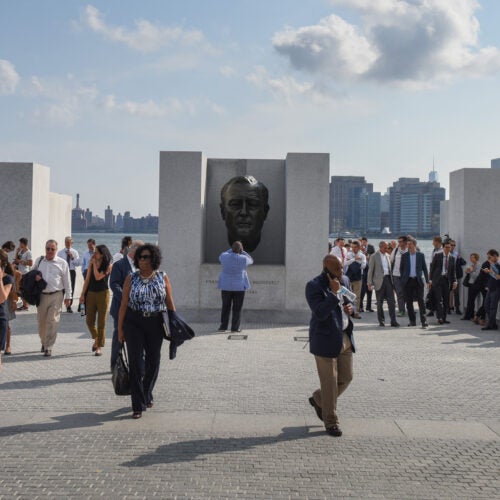 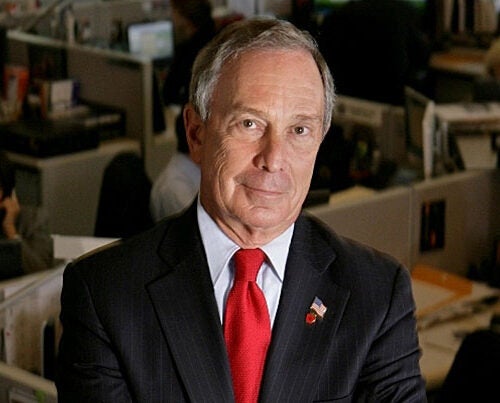