Opening the door for scientific leaps 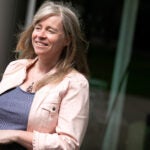 Research administration services at the Faculty of Arts and Sciences last week named nine Harvard researchers as the 2019 winners of the Star-Friedman Challenge for Promising Scientific Research.

The award provides seed money for high-risk, high-reward research that is unlikely to be funded through traditional grant programs in the physical, life, and social sciences because it is seen as too novel or risky.

“It’s important to do something that provides the opportunity to do more, to think differently, to take risks, [and] to do innovations that aren’t right at the edge of ongoing normal science, but that open the door for a bigger potential leap,” said Lawrence Bobo, the W.E.B. Du Bois Professor of the Social Sciences and dean of social science, at the award ceremony for the fund in University Hall. “That, I think, is the inspiration and the beauty and the success of the Star-Friedman Challenge.”

The researchers are working on four projects, which range from making one of the world’s smallest flying machines to opening a new lane of research in the study of climate change to developing groundbreaking technology that conducts electricity with 100 percent efficiency to an investigation into how environmental change affects bees.

“The kind of projects that are selected are chosen because of their tremendous opportunity, not because they look like anything that’s been done before,” said Randy Buckner, a professor of psychology and neuroscience in the Faculty of Arts and Sciences and Harvard Medical School and chairman of the faculty review committee that selects the projects. “In celebrating the winners today and hearing about their proposals, we’re telling our students —we’re telling our community —that we value innovation.”

The Challenge was created in 2013 by the Star family with a $10 million gift at the suggestion of James A. Star ’83. It was formerly known as the Star Family Challenge for Promising Scientific Research and awarded funds to researchers from FAS and the Harvard John A. Paulson School of Engineering and Applied Science (SEAS).

This year, with support from a $10 million gift from Josh Friedman ’76, M.B.A. ’80, J.D. ’82, and Beth Friedman, the Challenge expanded to include faculty at both Harvard Medical School and the Harvard T.H. Chan School of Public Health, and changed its name to the Star-Friedman Challenge.

As part of the ceremony, the researchers made short presentations about their work.

De Bivort, the Thomas D. Cabot Associate Professor of Organismic and Evolutionary Biology (FAS); Holbrook, Charles Bullard Professor of Forestry and professor of organismic and evolutionary biology (FAS); Myers, principal research scientist for the Planetary Health Alliance (Harvard Chan School); and Crall, Rockefeller Foundation Planetary Health Alliance Fellow in Organismic and Evolutionary Biology (FAS) are working on a project that will adapt tools from behavioral neuroscience and machine learning to study how environmental changes, like increased concentrations of atmospheric carbon dioxide, are affecting bees and their pollination of key food crops. The project could help design technology to support bees and other insects in their pollination.

David Keith, the Gordon McKay Professor of Applied Physics (SEAS) and professor of public policy (HKS), and Joost Vlassak, Abbott and James Lawrence Professor of Materials Engineering (SEAS), are hoping to build a nano-size self-levitating device, based on the principles of photophoresis — the phenomenon that causes dust and other small particles to float. If successful, these devices could create a new class of microscale atmospheric sensors.

Ann Pearson, the Murray and Martha Ross Professor of Environmental Sciences (FAS), hopes to use an organism known as the Thaumarchaeota and the chemical signals it leaves in marine sediments to shed light on a topic essential to climate research: the relationship between Earth’s temperature and the concentration of carbon dioxide in the atmosphere. The ice-core records that have shown higher carbon dioxide levels correlating to a warmer Earth are limited to the age of Earth’s oldest ice cores, which are only about a million years old — a tiny fraction of the Earth’s history. Pearson and her lab hope her approach with the Thaumarchaeota will allow them to go further back.

Also, as part of the ceremony, past winner Paola Arlotta, Golub Family Professor of Stem Cell and Regenerative Biology at FAS, shared an update on her 2015 project exploring the development of human cerebral organoids grown from stem cells taken from a human skin sample. 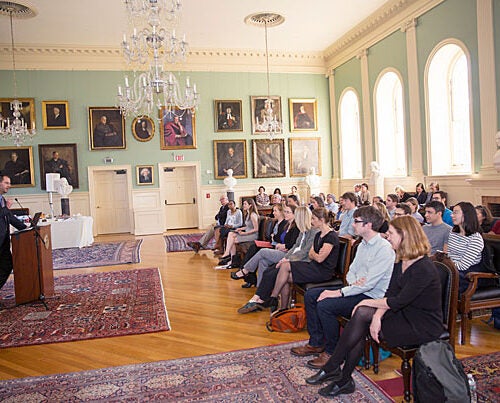 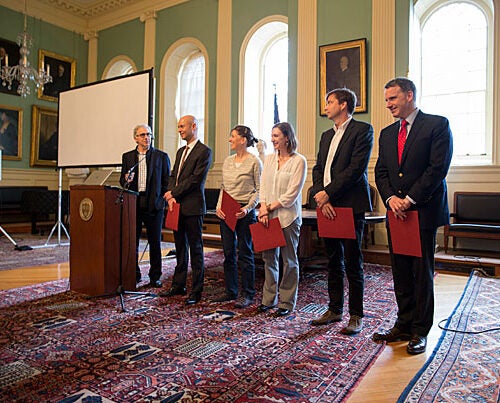