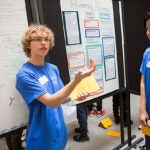 Investigating how languages emerge and evolve. Using climate-change data to predict dust storms and bacterial meningitis outbreaks in Northern Africa. Understanding whether age-related diseases may stem from a common driver. Determining whether the presence of oxygen can be used to predict life on distant exoplanets.

Harvard scientists are known for pushing boundaries, but the projects funded through the 2017 Star Family Challenge for Promising Scientific Research are poised to take that reputation to new heights.

Created through a gift from James A. Star ’83, the annual challenge funds high-risk, high-reward research that might not receive funding through other programs.

“I want to salute the winners of the 2017 Star Family Challenge,” Star said. “This is a wonderful set of projects, and I look forward to hearing about them. I also want to thank Professor Randy Buckner and his committee for taking over from [former chairman] Doug Melton and moving the challenge forward.”

As part of the program, the faculty members selected for the awards — Jesse Snedeker, Elsie Sunderland, Caroline Buckee, Amy Wagers, and Robin Wordsworth — made short presentations on their work to a standing-room-only crowd in the Faculty Room of University Hall.

“The need for the type of funding the Star Family Foundation is providing is going to become ever more critical,” he continued. “This support means a very great deal.”

“Language is ubiquitous,” said Snedeker, a professor of psychology, describing her project. “Everywhere in the world you will find people talking to one another. These languages have many properties in common — they all use nouns and verbs, they all have grammatical rules, and all languages are acquired by young children over a very short period. But … there is also remarkable diversity of language — they can vary in their words, in the specific grammatical structures that they allow, and in their sounds.”

The basic question Snedeker hopes to address is one that has long been at the center of psychological research: Where does language come from?

It’s an extremely difficult problem, she noted, because while the first humans left Africa at least 60,000 years ago, written records of language begin only about 5,000 years ago. What researchers can examine are the languages created by deaf communities.

Working with the deaf community in Nicaragua, Snedeker and colleagues plan to collect data on shared words, grammatical rules, and social networks among students from the 1970s through the 1990s with the goal of understanding how language changed over time.

“What other researchers have discovered is that the first cohort — those students that came into the schools in the ’70s — had shared signs for certain words and ordered narratives, but they do not reliably mark which argument is the subject and which is the object with either word order, like English, or case marking, like Russian or Turkish,” Snedeker said. “But by the time the later cohorts come in, they use verbal inflection about 50 percent of the time, and subject, object, verb word order the rest of the time.

“This rapid pattern of evolution of language … raises some interesting questions,” Snedeker added. “The first we’re going to be asking is: Why haven’t these older signers picked up on what the younger people around them are doing? They’re part of a larger community, yet they haven’t adopted the regularities that the 20- and 30-year-olds are using.”

Working with Martin Nowak, a professor of biology and mathematics and director of the Program for Evolutionary Dynamics, and Annemarie Kocab, a Ph.D. candidate in psychology, Snedeker hopes to create computational models that can provide new insight into the social dynamics that drive language.

When you consider the greatest risk factor for many diseases, says Wagers, the Forst Family Professor of Stem Cell and Regenerative Biology, it all comes down to one word: aging.

There is growing evidence that diseases such as cancer, cardiac disease, and cognitive decline — today viewed as separate medical challenges — could be treated by targeting their age-related roots, Wagers said.

“The underlying goal of this project is to understand the fundamental physiological processes of the natural process of aging, and then understand how those impact health,” Wagers said. “[With] that understanding, can we develop therapies or other interventions that allow us to take aim at that root cause, or develop strategies that could be applied across different diseases of aging which have typically been thought of as independent.”

The notion that many age-related diseases may share a common driver was inspired in part by the discovery of mutations in circulating blood cells that accumulate with age and lead to clonal hematopoiesis — problems in the formation of blood. Wagers and colleagues hope to investigate a new hypothesis — that those mutations, and the problems they cause, may be a common driver of age-associated dysfunction across organ systems.

“What this project will allow us to do is clarify the relevance … of these age-related [mutations],” Wagers said. “This will allow us to understand whether there is therapeutic value in targeting those clones.”

Seasonal change and illness often go hand in hand, but in West Africa, the combination can be deadly.

Though it’s thought that the dust irritates the throat, making people more susceptible to disease, Sunderland plans to test an alternative hypothesis — that meningitis bacteria are carried on the winds that drive those dust storms.

“Microbes can be transported on aerosols like dust,” Sunderland said. “And these dust storms are very much a function of global climate … so the intensity of these storms has been changing quite a bit over the last number of years. This is a very dynamic phenomenon that we are trying to link to the spread of meningitis in the area.”

Sunderland’s partner on the project is Buckee, an infectious disease epidemiologist from the Harvard Chan School, who said that while there has long been evidence of correlation between the dust storms and the outbreaks, the mechanism behind the link has been unclear.

Along with Buckee, Sunderland has recruited help from Tovi Lehmann of the National Institutes of Health, who samples insect populations on wind currents in Mali using helium balloons, and Stephen Bentley, a bacterial genomics expert at the Wellcome Trust Sanger Institute.

The group plans to use helium balloons and microbial collection devices to sample aerosols transported by winds in Mali, sequence the bacterial genomes that are collected, and assess the risk of atmospheric spread of meningitis and other windborne pathogens.

“The idea is to provide some metrics to use for modeling to better understand these outbreaks, and to potentially use for forecasting,” Sunderland said. “That’s a major benefit for the practice of public health and being able to identify where vulnerable populations are.”

With every discovery of a new exoplanet, interest in the idea that one may hold extraterrestrial life gains momentum. But how will that life be detected if the technology doesn’t exist to send probes into deep space?

One possible method, says Wordsworth, an assistant professor of environmental science and engineering at SEAS, may be in detecting oxygen in the atmosphere of other planets.

“What’s really fascinating and exciting about this to me is that for the first time on a large scale this question of extraterrestrial life is no longer something which is purely in literature or science fiction,” Wordsworth said. “It’s something we can start to address scientifically.”

Though there is wide evidence that oxygen in Earth’s atmosphere is due to the presence of life, there is debate about whether the gas is a reliable biosignature, because recent research has shown that some planets can produce oxygen-rich atmospheres abiotically.

In an effort to resolve that debate, Wordsworth and collaborators David Charbonneau, a professor of astronomy, and Dimitar Sasselov, Phillips Professor of Astronomy and director of the Harvard Origins of Life Initiative, plan to construct advanced planetary evolution models that incorporate atmospheric, surface, and interior processes to simulate the early years of a planet’s development — the period that most affects a planet’s oxygen accumulation.