A new effort to image the sources of gravitational waves. The development of meta-materials with previously unexplored properties. Using computers to survey urban environments as a measure of economic evolution. Advancement of computer models to help understand how the brain interprets shape. Monitoring brain activity over weeks or months as animals learn complex behaviors.

The ideas may sound like science fiction — but with support from the Star Family Challenge for Promising Scientific Research, they might one day be science fact.

The Star Family Challenge, whose creation and funding were directed by James A. Star ’83, makes grants annually to high-risk, high-reward research efforts that might not receive funding through other programs.

“I’m grateful to challenge chairman Doug Melton and his fellow prize committee members for the rigor and intellectual curiosity they have brought to the selection process,” James Star said. “This is the third year in which prizes have been awarded, and the quality of the winning projects remains extraordinary.”

As part of the challenge, the five faculty members selected for the awards — Edo Berger, Katia Bertoldi, Edward Glaeser, Talia Konkle, and Bence Ölveczky — made short presentations to a standing-room-only crowd in the Faculty Room of University Hall.

“The Star Family Challenge is remarkable in several aspects,” Dean of Science and Mallinckrodt Professor of Geophysics Jeremy Bloxham said. “First, it brings together faculty from different corners of Harvard. Each time I’ve been to this event, it’s been a treat to hear about areas of research that I don’t think about everyday.

“This event is also noteworthy because it’s important today to have funding for people who are generating good ideas, rather than funding for people who are writing grant proposals that meet the particular description of the program they are applying to,” he continued. “This program gives us an opportunity to recognize people who are thinking outside the box and generating truly imaginative ideas, and gives them a boost in research funding so they can explore the full potential of what they’ve been working on.”

For Professor of Astronomy Edo Berger, that potential includes the chance to get a first-ever look at the cosmological events — like the collision of black holes — that create gravitational waves, or ripples in the fabric of space-time.

Researchers made headlines earlier this year with the first confirmed detection of such ripples, Berger said, but some information — particularly their exact location — can only be obtained by imaging their source using more traditional techniques.

“The first gravitational waves were detected in September 2015 … but when the detectors reach their full sensitivity a few years from now, we will be able to detect these events about once per day,” Berger said. “If we have this new way of seeing the universe, why do we want to combine this with more traditional observations?

“Gravitational wave data provides completely unique and new insights into black holes and neutron stars, but it doesn’t give us the complete picture,” he continued. “One key thing that’s missing is the precise location in the sky where this occurred. Without a precise position, we can’t get a measurement of the distance, so we don’t really know the full energy scale of the system. We don’t have an understanding of the material that is present in the system after the merger is completed. Does this merger cause an ejection of material or produce new jets of radiation? We don’t have the full context of this event.”

With support from the challenge, Berger said, his plan is to rapidly image regions where gravitational waves are detected, and use computer algorithms to analyze the data in real time to sift through thousands of astronomical objects and identify the subjects of their search.

They’ve been hailed as the key to making science-fiction gadgets like cloaking devices a reality, but the development of new meta-materials — materials with properties not found in nature — has been limited by the challenge of controlling stress waves in solid materials.

To overcome such challenges, designers of electrical systems have introduced an exciting new model for this kind of work by using topology — a concept that emerged from quantum physics — as an organizing framework. 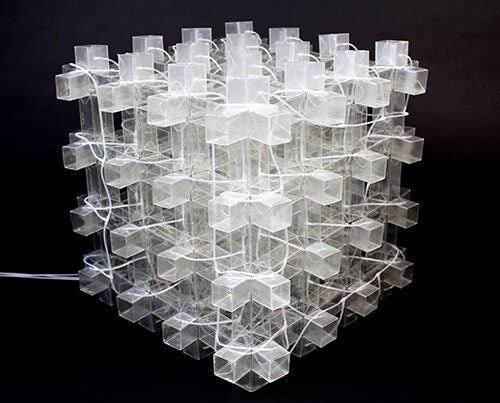 3-D material changes shape as it prepares for next task

Taking that framework as inspiration, Katia Bertoldi, the John L. Loeb Associate Professor of the Natural Sciences, and colleagues plan to design, fabricate and characterize new mechanical metamaterials that encode topological properties. If successful, this work could create new possibilities for impact and blast mitigation in engineering, or even pave the way for entirely new technologies.

“The idea here is to use ideas from topology to design a system in which we can control the propagation of elastic waves in the material,” Bertoldi said. “That is very difficult to do now … it’s our hope that this will also allow us to explore other properties of mechanical metamaterials.”

For much of human history, Fred and Eleanor Glimp Professor of Economics Edward Glaeser said, being poor and being rural were virtually synonymous. These days, however, the rise of urbanization has created a new type of poverty that is notoriously difficult to gauge.

“Cities are great pathways from poverty to prosperity,” he said. “But they also create challenges, because just as urban proximity can speed the flow of ideas and commerce, it can also speed the flow of various forms of contagion and lead to increased crime.­ 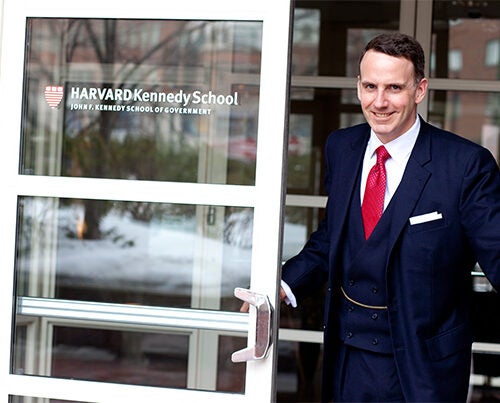 “One of the biggest challenges is measurement,” Glaeser added. Because many poor nations aren’t well-governed, very little — if any — work gets done to quantify economic activity infrastructure or even public health.

But while it may be difficult to obtain traditional statistics from some regions, images are another story. The question, Glaeser said, is whether researchers could use computers to extract information — such as median income — from images of a particular city.

Going forward, they plan a pilot study in Indonesia using several thousand images, and hope to expand the work to India, Pakistan, and Bangladesh over the next year.

“We want to able to use images to let us measure median income levels,” Glaeser said. “But a whole lot of other things can also be measured — where sewers are open, poverty, and changes in urban development.”

It may appear easy to recognize everyday objects, like a table, chair, or telephone, but in fact it’s one of the most complex processes in the brain — and one that scientists still don’t fully understand.

“When we look at the world, our cognitive system is putting an organization on whatever we see — those are all cognitive constructs,” said Assistant Professor of Psychology Talia Konkle. “The question is, how does the visual system take in light and recognize those things? We can’t possibly have pre-existing representations for all the things we see in the world in our brain, so how do we organize all that?”

While researchers understand that the visual cortex extracts information about edges from the images it receives, it’s still unclear how that information is processed into shapes, and then into recognizable objects.

“How do you parameterize shape? What basis do you use that contains all possible shapes?” Konkle said. “We don’t know how that works.”

In the hope of providing some of those answers, Konkle’s project would use insights from mathematics to develop a model based on curvature, and then rely on behavior and neuroimaging studies to test it.

“There are two avenues where this can have an impact,” she said. “The first is just in providing a formal way to predict shape perception, which is a problem we’ve been looking at for a long time. The second is this will provide an immediate, multi-disciplinary tool that can be used in a wide variety of research.”

Imagine trying to understand a film if you only watch one minute every half-hour and you begin to understand the challenge many neuroscientists face, said Bence Ölveczky, the John L. Loeb Associate Professor of the Natural Sciences.

While researchers have long been able to use electrodes to record the activity of neurons in the brain, over time electrodes can move slightly, making it all but impossible to record from the same neurons over longer times.

“If you want to understand behavioral and mental processes that play themselves out over weeks and months — for instance, I’m interested in understanding motor-skill learning — the ability to record from the brain and see how the brain changes would be very important,” Ölveczky said. 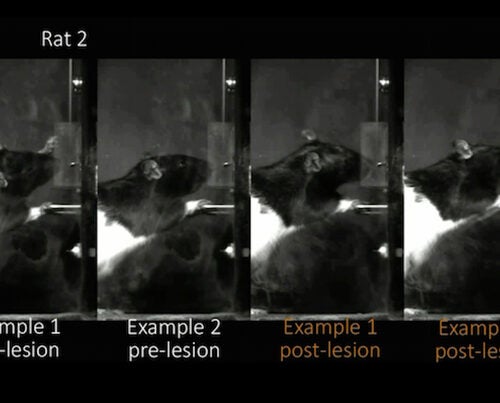 Motor cortex is critical to learn new skills, but may not be needed to perform them, study says

Typically, he said, such experiments are done in a fragmented fashion — researchers develop a task for an animal, and record brain activity as it performs the task, often recording from different neurons on different days.

“We build up little snapshots of what’s going on in the brain, but this process is fundamentally continuous,” Ölveczky said. “As a consequence of learning new skills, the circuits in the brain are reorganized. We want to be able to follow this process at the level of single neurons.”

To do that, Ölveczky and colleagues plan to turn to another project supported by the Star Family Challenge — injectable electronic meshes developed by Charles Lieber, the Mark Hyman Jr. Professor of Chemistry, chair of the Department of Chemistry and Chemical Biology.

“We want to incorporate this technology into our setup with the hope of being able to record from hundreds of neurons continuously as an animal learns a task,” he said. “We will be able to monitor processes that occur on long time scales. What happens after brain injury? How do the neural circuits compensate for lost brain tissue? What happens in neurodegenerative disorders like Parkinson’s or Alzheimer’s? When we put all this together, I think it will be transformative for the way we think about neuroscience and the brain.”