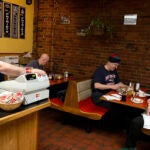 When Harvard men’s basketball coach Tommy Amaker saw his team’s schedule over the semester break and realized they had a day off in Atlanta, he quickly decided to make it count.

That’s how, after a hard-fought win, Crimson basketball players found themselves shaking hands with former U.S. President Jimmy Carter and touring some of Atlanta’s historic Civil Rights sites, including the Ebenezer Baptist Church where Martin Luther King Jr. was co-pastor with his father.

The experience, while exciting and humbling for players, is part of a larger, more important effort by their coach to educate them beyond the basketball court.

“That’s what it’s all about,” said Amaker, Harvard’s winningest coach in program history. “It’s more meaningful to call myself a teacher and a leader than a coach. I know ‘coach’ encompasses those things, but it’s bigger than me coaching basketball. We’re always trying to connect different pieces that can have our kids embrace different parts of the world or what’s happening.”

Layovers between away games provide an almost perfect opportunity for that.

“We are consistently trying to maximize any trip that we take,” Amaker said. “Wherever we go, [we always think about] what are some of the things that we can do around the game, around our basketball responsibilities, that could be educational for players and our team.”

“Wherever we go, [we always think about] what are some of the things that we can do around the game, around our basketball responsibilities, that could be educational for players and our team.”
— Harvard men's basketball coach Tommy Amaker, pictured above

In Atlanta, that meant: attending Sunday service at Ebenezer, a National Historic Landmark; touring the gravesite of King and his wife, Coretta Scott King, at the Martin Luther King Jr. Center for Nonviolent Social Change; and visiting Paschal’s Restaurant, a key meeting place for leaders of the Civil Rights Movement.

The Rev. Jonathan L. Walton, Plummer Professor of Christian Morals and Pusey Minister in the Memorial Church, who is an adviser to the team, organized the trip and acted as tour guide. His notes helped the players appreciate the visit and connect it with a bigger message, team members said.

“Knowing the history behind it all … and realizing what it meant for our country at the time” was one of the biggest takeaways, said captain Weisner Perez ’19. “One thing that resonates with our team as I try to relate it all is the word sacrifice. To be there and to know how much these people sacrificed of their lives, of their time — time with their loved ones — to have an impact on our lives and our society today. I think with us as a team that’s a word that coach has really told us about. You have to be able to sacrifice … and that’s what those people did.”

The lesson was fitting, because the team’s theme for the year is sacrifice on and off the court, especially in how it’s led to the opportunities many more people now have.

The team, Perez said, also appreciated the church’s welcome to players of different religions, the beauty of the Kings’ grave site, and the excitement of meeting a former president. Although not originally planned, the meeting with Carter came together smoothly a few weeks before the trip. Harvard Kennedy School Public Service Professor David Gergen, the founding director of the Center for Public Leadership, helped organize the get-together when the team learned that Carter would attend the service at Ebenezer.

For Georgia native Robert Baker ’20, the meeting was especially meaningful. “Being from Atlanta, meeting Jimmy Carter is a big deal,” he said. Carter was governor of Georgia before becoming president, and his presidential library is in Atlanta. He has spent decades working with various charities, helping build bridges between people. “During the church service, the pastor actually talked about some of [Carter’s] accomplishments, especially his impact on the black community, so that was great to hear, knowing that someone from my state did that and made such a great impression on this nation.”

Baker also appreciated bonding with the team off the court.

“Probably 95 percent of the time when we are all together, all 20 of us, it’s on the court, in the weight room, on the track, or something like that, so being outside in such a unique place like Ebenezer Baptist Church or Martin Luther King Jr.’s memorial site, it was very special — different,” he said. “It was great to share some of the history of where I’m from with my teammates. It meant a lot to me.”

That kind of experience plays right into Amaker’s philosophy. He wants his players to be well-rounded and leave Harvard with experiences that bring them closer together while helping them branch out to understand the world.

“We try to have an impact with them to see how, with the educational opportunity they are getting from [Harvard], they can go and do some amazing things for themselves and for others,” Amaker said.

It’s why he has organized previous visits and is planning future ones. While in Memphis a few years ago, for instance, his team visited the National Civil Rights Museum. On an upcoming trip, he hopes to visit the National Museum of African American History and Culture in Washington, D.C.

Amaker also helps his players network with local and national leaders from the business, political, sports, and academic communities, whom he hopes help educate and inspire the team. In Atlanta, the players met NBA coach Mike Woodson. In the past, they have connected with influencers such as former NBA star Kareem Abdul-Jabbar, who spoke to them about issues of race, and Civil Rights activists including Harry Edwards, who talked about athlete activism. Amaker also invites his players to his monthly “Breakfast Club” gatherings, which can include guests such as Boston Mayor Martin J. Walsh or Harvard philosopher Cornel West.

Amaker believes that the Crimson’s success on the court — he has lead the team to six Ivy League titles and four trips to the NCAA tournament — has come in part from helping his players become well-rounded citizens as well as student athletes.

“Those are the things that matter to me,” he said. “That we can connect, broaden their horizons, educate, and teach our players — along with don’t forget to box out and take a shot. If we continue to connect our players to the right people through Harvard, so many things are possible.” 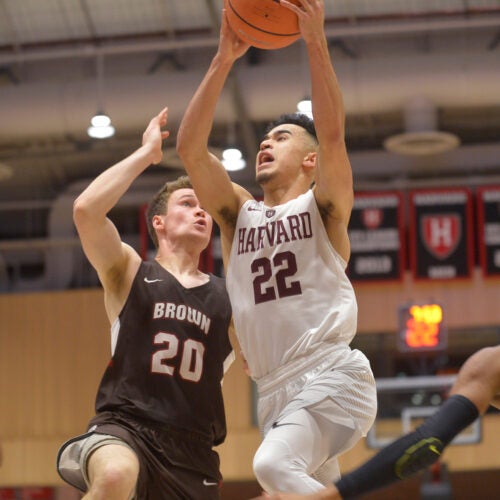 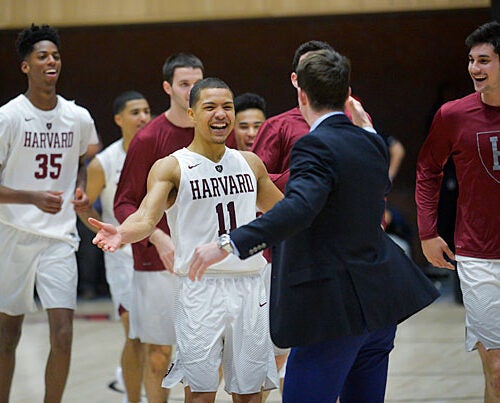