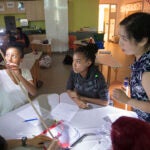 To everything there is a season? It’s not as simple as that

In the preseason Ivy League poll, the media tagged Harvard men’s basketball team to land the top slot. Last year was the first time in six years that Harvard failed to win at least a share of the Ivy championship, after losing to Yale 73-71 in the semifinals of the inaugural Ivy League Tournament.

On Sunday Harvard Bryce Aiken ’20 netted 30 points, guiding the Crimson to a thrilling 70-67 overtime victory over the University of Massachusetts. Aiken poured in 12 of Harvard’s final 16 points, including the game-winning 3-pointer with just 1.9 seconds on the clock. Chris Lewis ’20 was in double figures for the second straight game with 15 points, while Corey Johnson ’19 pitched in 10 of his own. Mario Haskett ’21 dazzled on defense, posting a game-high three steals. For his efforts against UMass and MIT two nights earlier, Aiken was selected Ivy League Player of the Week.

Harvard men’s basketball is off to a 2-0 start, and travels to Holy Cross on Thursday and New York City on Saturday. Tipoffs are set for 7 p.m. and 1 p.m., respectively.

For more updates and the season schedule, visit gocrimson.com.