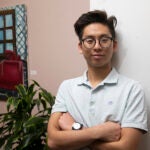 The day will come, if it hasn’t already, when you’ll be riding down the road, glance to the side, and see a car motoring along with no driver. Autonomous vehicles are on the way, and two Harvard initiatives are helping to prepare Boston, and beyond, for their smooth arrival.

A few years ago, when tech companies like Uber and Airbnb spread across the nation and beyond, they introduced rapid and irreversible changes in how people travel. As the firms’ simple apps rocketed their platforms to popularity, the local policymakers responsible for ensuring that corporations contribute to the public good were left far behind, playing catch-up.

Policymakers around the globe grappled unevenly with these sudden technological shifts. In Hungary, lawmakers blocked Uber, and in Boston lawmakers passed tough laws on short-term housing rentals. Last summer, Cambridge officials ordered Bird, a dockless electric scooter rental company overseen by an app, to remove its scooters after it arrived without an agreement to operate. Now, as autonomous vehicles (AVs) are increasingly rolling through some American cities, policymakers are looking to avoid the past mistakes of reacting after the arrival of disruptive technology, and instead they’re planning for it.

They hope that, with thoughtful policies in place, self-driving cars will debut in a way that provides real public value. Their potential to improve civic life is great, including by reducing road deaths, increasing mobility for the elderly and disabled, and boosting transit in areas with little current access. At the same time, policymakers are wary of potential problems, such as increased road congestion, inequitable pricing and availability, and the loss of public revenue in a future with less need for metered parking and fewer traffic violations.

Here’s a look at these futuristic yet pragmatic Harvard efforts:

From craziness to preparing for a coming reality

Like many people, when Harvard lecturer in public policy Mark Fagan first heard the buzz around autonomous vehicles, he wrote it off as wishful thinking. That line of thinking, however, didn’t last long. “I just became convinced from talking to people that it wasn’t crazy, and it was really going to happen, and we ought to be ahead of it,” Fagan said.

As head of the new Autonomous Vehicle Policy Initiative at the Harvard Kennedy School’s (HKS) Taubman Center for State and Local Government, Fagan is working to do just that, help officials craft policies while the technology is still emerging.

“What cities and towns are trying to do with AVs is plan in advance so that they bring them logically to the market in a way that supports public value as opposed to just private value,” Fagan said.

As part of their early effort, Fagan and Rafael Carbonell, executive director of the Taubman Center, reached out to the city of Boston, which has been a test bed for self-driving cars and was looking to dive deeper into the policy side. The pair worked with the city to convene more than 40 representatives from the business, technology, community, and transit sectors to conduct an exercise developed by Fagan called a policy scrum, an intensive session in the mold of a design sprint or hackathon. Completed over two days, the exercise helps officials fast-track their thinking on issues. The hope is they’ll leave a session with strategy options to shape policy.

For Boston, the priority was looking at how to encourage shared rides and vehicles within autonomous vehicle technology. In its Go Boston 2030 transportation plan, the city has endorsed using shared fleets of self-driving vehicles to reduce congestion.

“Largely what we came away with was a focus on curb management as the next piece that we should tackle to get at this sort of sharing component,” said Kristopher Carter, co-chair of the mayor’s Office of New Urban Mechanics, which oversees the city’s vehicle program. “We can use that as a tool to incentivize certain behaviors, as well as to incentivize certain types of vehicles or businesses.”

After the initial foray with Boston, Fagan and Carbonell expanded the initiative’s reach to Toronto, Kansas City, and the state of Rhode Island. Each policy scrum in those places produced insights for possible implementation.

In Kansas City, for example, the participants changed a conversation on data ownership and access — which is among the most controversial issues involving both driverless car programs and ride-hail companies — to focus instead on what policymakers need the data to answer. That question proved more fundamental than debating with tech companies over who should have access to the data. This switch, Fagan said, should prompt tech companies to be more open to sharing data since they know its intended use.

The Autonomous Vehicle Policy Initiative is also sharing information among the scrum hosts so they can learn from one another. The initiative hopes to publish that information on its website as well. It is focused on involving students in its work, by having them help with the policy scrums or bringing learning from the sessions into the classroom.

In the spring, the initiative will work with three more cities. More partnerships are likely. Increasingly, the initiative is hearing from officials struggling to develop policies around disruptive technologies.

“AV is very much at the forefront,” Carbonell said.

“We’ve done some marketing, but now we’re starting to see a little bit of a tipping point and people starting now to come to us and say, ‘Hey, we hear you do this thing on AV policy. Tell me more about it,’” Fagan said.

The autonomous vehicle revolution that was once dismissed is happening. The real craziness, officials say, would be not being prepared for it.

There is broad understanding that many pivotal issues facing the world — such as climate change, immigration, and labor shortages — are intertwined, and changes in one can affect another. The shifts don’t develop in isolation.

Harvard Law School Professor Susan Crawford understands that the rise of autonomous vehicles will be no different. To properly prepare the students who will not only have to adapt to these technologies but someday help shape them, their education cannot happen in isolation either.

So when Crawford, the John A. Reilly Clinical Professor of Law, designed her class “Autonomous Vehicles and Local Government Lab,” she made sure that its 80 students would be exposed to an interdisciplinary effort from a range of Schools, ensuring students would learn from each other.

She designed the course with Boston officials so that her lab — made up of students from Harvard College, the Graduate School of Design, the Kennedy School, the Law School, and the T.H. Chan School of Public Health — could take on the city as a client.

“It’s a wonderful mesh,” Crawford said. “This class is not only an argument for cross-training but also for serving in local government, or government in general. It’s an argument that all urban planners need to know something about the law and that all techies need to know something about design and urban planning. It’s thoroughly meshing students from different Schools to take on concrete questions posed by Boston as it considers the introduction of AVs.”

The course served in part as an introduction to the issues surrounding driverless vehicles. Each week Crawford brought in experts with different perspectives, such as that of the private sector (which students learned, in part, from a representative from nuTonomy, one of the driverless vehicle companies testing cars in Boston) or the labor side (which they learned from the assistant commissioner for data and technology at the New York City Taxi & Limousine Commission).

At its core, though, the course was a laboratory where students in group projects could apply their learning to real-world scenarios. The questions and prompts posed by Boston officials targeted issues they’re confronting as they expand the AV testing, now happening in the Seaport area, to the rest of the city. Questions ranged from concerns about the city’s authority over curbsides to data-access needs.

“The class really exposed us to a variety of angles and discourse currently surrounding AV literature and discussion,” said Evan Shieh, a master’s student from the Design School. “Having a client drove us to ground the group work into recommendations that were actionable, but also allowed us to ground the scope of examination with respect to specific contextual issues facing Boston today.”

For the project, Shieh’s group, which also had students from the Law School, looked into whether the city should invest in smart infrastructure, who should pay for it, and how and when to implement it. In a future of autonomous vehicles, smart infrastructure, such as high-tech street signs or infrared lane markers, would provide driverless cars with data on traffic conditions and on lane safety during bad weather. The data could also help officials design better roads or establish policies to reduce congestion.

That team studied smart infrastructure used in other cities in the U.S., such as Detroit, and around the world, such as in Israel or Singapore, speaking to a member of the nuTonomy team there.

At the end of the course, students presented their recommendations to the city and other stakeholders. They included strategies to maximize the use of data collected from autonomous vehicles, options for the city on smart infrastructure, and establishing rules around AV pickup and drop-off zones.

Carter, who also has worked with HKS’s Autonomous Vehicle Policy Initiative, was impressed with the recommendations. “There was a balance of ‘Is this legally possible?’ and ‘What does it actually mean in the physical environment?’ and then ‘How does a policy with it manifest itself?’” he said.

For Crawford, the way the students interacted validated the way she structured the course.

“I want the students to be able to imagine themselves working in government,” she said. “I want them to appreciate the range of the kinds of thinking that are involved in policy planning [and put something together] that’s useful for the city.”

The students are submitting a consolidated briefing on their recommendations. 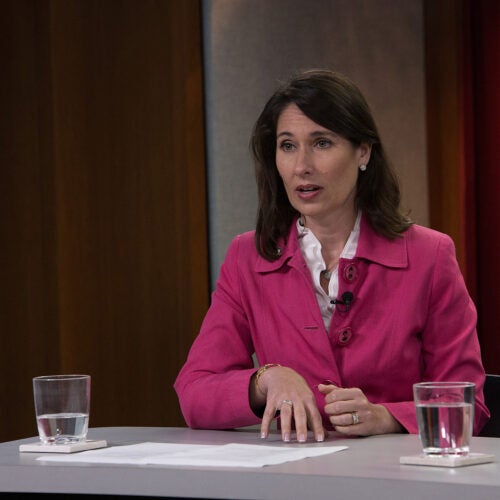 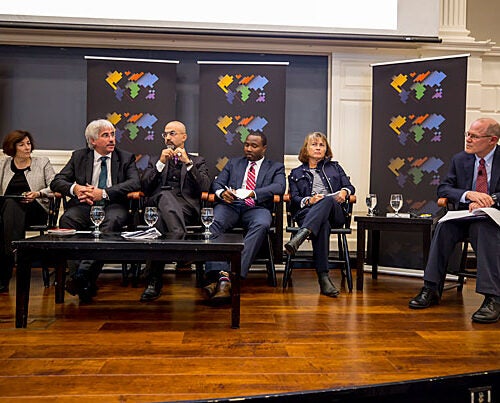