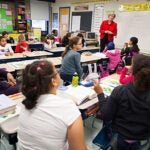 President is principal for a day

To see how the 129th Harvard-Yale game played out, with the Crimson beating Yale 34-24, visit gocrimson.com.

Each year Harvard and Yale vie for bragging rights in a football rivalry dating back to 1875. Harvard vs. Yale is more than just a game. It’s The Game. For many alumni, it’s also a chance to reconnect and reaffirm friendships forged decades ago.

For Bob and Carolyn Cumings of Winchester, Mass., the 2008 game marked the 56th anniversary of their blind date, and each subsequent game adds to their personal history as a married couple.

Tailgating at The Game is an art form. The spreads run the gamut from burgers to caviar and wine served with crystal and silver. On a table between parked cars in 2004, Bob Shaunessy ’59 proudly displayed the game ball he was given as captain of the team that defeated Yale, 28-0. The 2004 game marked the first time that Shaunessy had taken the ball out of his home since he and his mates blanked Yale 46 years earlier.

On the field at halftime, the two marching bands parody each other’s schools with creative mischief and elaborate formations. At the 2009 game in New Haven, four Yale men dressed only in pink undershorts proudly displayed the letters Y-A-L-E, painted in blue on their chests, as they exhorted their comrades to crush the Crimson.

Cymbals clash as the band belts out “Ten Thousand Men of Harvard,” fanatic fans in school colors and face paint cheer wildly, and groups of old grads bundle together for warmth and friendship, all adding to the pageantry that makes this tradition so much more than just a game of football.

— Photographs and text by Jon Chase