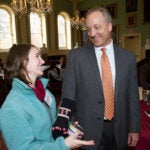 Taking a moment to give thanks

The morning of the legendary Harvard-Yale football game, better known as The Game, the sun’s rays illuminated the chilly faces of the fans from both the Harvard and Yale communities.

By 10 a.m. they had rolled into the parking lots surrounding Harvard Stadium and set out elaborate tailgate feasts. The aroma of roasted chicken, barbeque ribs, and sausages wafted through the air. Alumni from the classes of decades past greeted each other warmly with big hugs.

Flags and footballs
Bill Markus ’60 strolled proudly through the tailgating party, waving the pride of Harvard’s “most loyal fan” — the Little Red Flag of 1884. The tradition was started by Fredrick Plummer, Class of 1888, who brought it to 59 consecutive Harvard-Yale games. As the official flag bearer, Markus travels from his home in Pittsburgh to attend every game.

Bob Shaunessy ’59 was the captain of the 1958 team. He is famous for two things at his tailgate site: his ’58 team ball and his scotch.

This year, however, he left the ’58 football at home. It seems it had become so popular that someone thought it would be fun to take it for a running drive down the tailgating lane, only to be tackled by shocked onlookers.

Attending his 73rd Harvard-Yale game, Dick Bennink ’38, stood and waved the “Flag of the Most Harvard-Yale Games of Anyone Alive.” Now 95, his daughter, Nancy, drives him down from New Hampshire. (He grew up in Cambridge on Fresh Pond Lane.) Sitting proudly in the stands with him were also his son, Rick, and his granddaughter, Margaux. Margaux wore a necklace with the little silver football Bennink had received when his JV team beat Yale back in ’37.

Friends, fans, and music
Walking around the grounds, the thumping of the New Orleans-style sounds of the Hot Tamale Brass Band drew people into the Sigma Chi tent on the outdoor track.

As the band marched out, the disc jockey stepped up and the crowd went Gangnam Style as a hundred students danced in the unofficial fraternity’s tent.

Joshua Getega ’16, in full Crimson attire, attended The Game with his friend Javan Oluock ’16 of Yale. Both were friends at home in Kenya and while Getega was confident Harvard would beat Yale today, Oluock insisted Yale would win. “We’re transient enemies, just for this game,” Getega said with a smile.

Students wore their thoughts on the topic as well, with Harvard T-shirts that read, “No one ever says ‘When I grow up I want to go to Yale’.”

One young woman had an intricate Yale insignia on her face, and when asked if it was painted, she replied, “No, it’s a temporary tattoo.” Asked if she would get a real one, she laughed and said, “I’m loyal, but I’m not that loyal.”

Even as the party continued, students began to make their way back to the stadium, which by the second quarter was filled with more than 30,000 people. With a game that toggled between teams, Harvard and Yale fans exchanged loud groans and moans that would roll out from one side of the stadium, while cheers and whoops came from the other side. At the end of the second quarter it was 3-3.

Jubilant fans from Dorchester and Southie got their hands on Yale’s fourth-quarter field goal ball that was kicked into the Field Club area of the end zone. Brendan Donovan, 12 years old, and his brother Timmy, 10, both got to touch the game ball. “I’m gonna play for Harvard,” Timmy declared. “Because Harvard is better and smarter than Yale.”

What an ending
“Let’s go Harvard!” resonated through the stadium, and with just a few minutes left Harvard took the lead.

As the sun’s last rays shone down on the field, the Dropkick Murphys played on the speakers, and with just over a minute left, Harvard ran 63 yards for a touchdown, and the screams of victory hailed up over Allston as Harvard won, 34-24.

As the huge Harvard banner was paraded in the end zone, the team’s cheerleaders did 34 push-ups.

Harvard fans, students, and alumni then rushed from the stands to the 10-foot-tall sidewall above the field. One man pitched his crutches over first before dropping down himself.

And so the sun set on another Harvard victory.