After the inauguration, the celebration 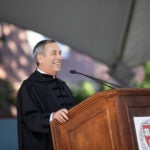 Bacow: ‘I am delighted to begin’

Harvard has had only 29 presidents since its founding in 1636, 140 years before there even was a United States of America. So the inauguration of a new leader in Cambridge is a special day, replete with rituals, robes, and relics. But it’s also a celebration, so the installation of Larry Bacow was followed by a giant block party in the Old Yard, with the entire Harvard community invited. Here are some moments and details from a pitch-perfect October afternoon.

For Tania Dominguez-Rangel ’21, the inauguration of Larry Bacow as president provided a chance to perform her favorite songs with her musical group during the festive block party in the Old Yard that followed the formal ceremony.

A concentrator in Romance languages and literature, Dominguez-Rangel sang with the group 21 Colorful Crimson while people enjoyed the music and sampled the food.

“The ceremony was very traditional,” said Dominguez-Rangel, a Mexican flag tied around her waist. “I plan to enjoy the party after our performance and before going to a club meeting.”

The celebration in the Old Yard kicked off as soon as the installation ended and was part carnival, part harvest fest, and part disco. Performers alternated with recorded music while a crowd of thousands snacked on treats such as cotton candy, apple cider, mini-grilled-cheese sandwiches, and popcorn. Attendees also took turns at a giant chess board and Jenga game; some waited to pose in front of a green screen lighted with a range of inauguration slogans.

One partygoer eager for a picture was Harvard Extension School student Tracie Gordon, who posed wearing a red wig and waving a crimson banner with a white H. She also held two signs: one said Larry, the other Adele. A member of Harvard’s Graduate Student Council, Gordon met with the Bacows at a recent council event. She said the couple made sure to greet everyone in attendance and to stop for photos.

“They were very open and welcoming and interested in what we were doing,” she said. “I wish them great success, luck, fellowship, and community here at Harvard.”

Dressed in his Harvard University Band uniform, tuba player Kevin Kurgat ’22 made his way through the Yard with a caramel-covered apple in his mouth. In one hand he carried a cup of popcorn topped with a doughnut, in the other the remnants of a H-shaped cookie. He was “making the most” of the party, he said with a laugh.

As a student from a small town in Michigan, Kurgat has been impressed by Bacow’s drive to make college affordable for everyone. “It’s really inspiring to me,” he said. Bacow’s stories about learning the power of listening from his mother and fourth-grade teacher have been no less inspiring, he said.

“The value of good listening is lost in my generation,” Kurgat said, adding that he hopes Harvard’s new leader continues to make the case for listening during his presidency, “for the betterment of society.”

‘Making Mountains As We Run’

Many friends of the Bacow family joined the inauguration celebration. Ruth Gold, a graduate of Harvard Chan School, Susan Spitz ’78, and James Arena-DeRosa ’78 relished taking part in the festivities. Like the Bacows, Gold and Spitz are members of Temple Emanuel in Newton.

“We enjoyed the ceremony, the speeches, and the poem,” said Spitz as she stood in line at a food tent offering hot pumpkin soup, candy apples, popcorn, and cookies.  “It was fantastic. We’re planning to stay for the party.”

Inauguration-goers needed to have their bags checked and their bodies waved with a security wand before they could enter the Yard, but no one seemed to mind waiting to be part of Harvard history. David Gergen, a professor of public service at Harvard Kennedy School, chatted on his phone as he stood with hundreds of others. Nearby, Jiawei Zhou, whose son, Dylan, started at Harvard this fall, sent pictures to a Facebook group made up of parents of freshmen who couldn’t travel to campus for inauguration.

For Zhou, the journey was a short one, from West Roxbury. “I wanted to support Harvard,” he said. “I also wanted to see it. It’s a rare opportunity.” The proud father was dressed for the occasion, clad in a crimson sweater. “It matches,” he said with a smile.

Two juniors arrived before the ceremony and grabbed some of the best seats in the house — the stairs leading up to Widener Library. Adams House roommates Eleanor Blum and Hayley Jaffe said they were both proud to be part of an important Harvard tradition.

Jaffe called the gathering “a pivotal moment in Harvard’s history as an institution.” Both undergraduates said that Larry Bacow’s attendance at local Yom Kippur services and at a student-led Shabbat service signaled his commitment to engaging directly with undergrads. Jaffe welcomes the new president’s efforts to “make sure undergraduates feel like they are heard and are being paid attention to.” Blum said she thought of former President Drew Faust as Harvard’s “spiritual leader,” and looks forward to seeing how Bacow will “take that in his own direction.”

Presidents, past and present

Fanfare for an uncommon day

Let’s shift for a moment to a different presidential inauguration and a phone call with Quincy Jones.

In the fall of 1992, Jones was producing a musical extravaganza to mark Bill Clinton’s upcoming presidential inauguration. While on the phone with Jones, longtime friend Jerold S. Kayden ’75, J.D./M.C.R.P. ’79, mused that the event should open with a fanfare. With Clinton calling for “an American reunion,” Kayden felt inspired by that expansive, celebratory musical form honed by greats like Leonard Bernstein and Aaron Copland.

After they hung up, Kayden went to work and created a mixtape of 14 fanfares that he sent to Jones. But he also sat at his piano to compose one of his own. He finished a handwritten score within a couple of days.

“I know you are swamped, and we both know that the world will not come to an end if there is no original piece of music written especially for the Clinton inaugural,” Kayden wrote Jones, with his mixtape and piano score attached. “Still, I can’t help thinking that this is one of those unique moments in history, and no matter how fabulous Copland is, it also would be terrific to have something original composed for the occasion.

“Anyway,” he closed, “I was just thinking, and there’s nothing wrong with that.”

Kayden’s piece, titled “Inauguration Theme and Fanfare,” didn’t make it in time for the Clinton inauguration, but it did open the inauguration of Harvard President Larry Bacow. Previously, it was performed at the 2014 opening of the renovated Harvard Art Museums, at the April ribbon-cutting ceremony for the Harvard Center for Green Buildings and Cities, and most recently at the dedication ceremony for the Smith Campus Center late last month.

“When I consider a fanfare, I think of both a celebration of the moment and a recognition that we stand on the shoulders of giants and are at one point on the longer arc of history,” says Kayden, now the Graduate School of Design’s Frank Backus Williams Professor of Urban Planning and Design. “Every celebratory moment is built of strands from the past.”

Accordingly, Kayden’s piece opens with two trumpets answering each other’s melody, a symbol of how this event was built from many prior ones. “History echoes in the present, Kayden reflected, “all building up to and creating the conditions for today’s celebration.”

Steeped in music since birth (his mother was a noted theater composer and lyricist), Kayden studied the trumpet and piano beginning at age 8. As a Harvard undergraduate, he was president of the Harvard-Radcliffe Orchestra, and performed at dedication ceremonies for Harvard’s Science Center, Gund Hall, and Pusey Library.

Kayden’s career has encompassed Harvard degrees from the College, the Law School, and the Graduate School of Design, with a teaching and research focus on law, the built environment, public-private development, and public space.