Bacow: ‘I am delighted to begin’ 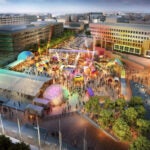 Harvard University inaugurated Larry Bacow as its 29th president on Friday afternoon in a celebration that was by turns solemn, thoughtful, and festive, and which drew together the Harvard community with friends and colleagues from universities around the world.

The installation, held in Harvard’s Tercentenary Theatre, put the ceremonial stamp on a tenure that began July 1 when Bacow took over from his predecessor, Drew Faust. The two-day inauguration ceremony included a series of events that delved into the arts, sciences, and humanities, with everything from academic panels to a community breakfast to a “Bacow Block Party” that rocked under the Old Yard’s trees and the John Harvard Statue’s gaze.

“It is up to us to leave our country and our world a better place tomorrow than it is today,” Bacow said in his inaugural speech, which examined the challenges ahead for higher education while explaining its importance. “I am delighted to begin.”

Bacow is an economist, lawyer, onetime Massachusetts Institute of Technology chancellor, and former Tufts University president, with degrees from Harvard Law School, the Harvard Kennedy School, and the Harvard Graduate School of Arts and Sciences. His inauguration ceremony featured prayers, poems, and music. It also included a charge of office delivered by the heads of the University’s governing boards, the Harvard Corporation and the Board of Overseers, and presentation of the traditional symbols of office by four prior Harvard presidents.

There were greetings from leaders in the community, the state (represented by Gov. Charlie Baker ’79), other colleges and universities (represented by MIT President L. Rafael Reif), and from Harvard students, faculty, staff, researchers, and alumni. 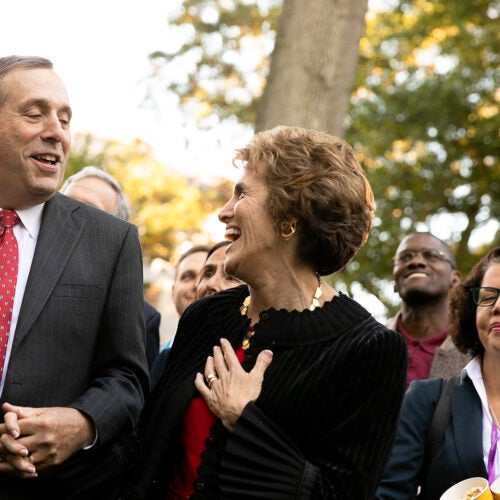 After the inauguration, the celebration

Their remarks ranged from poignant to humorous, from personal notes to professional memories. Speaking for MIT, where Bacow was at various points an undergraduate, a faculty member, and chancellor, Reif joked that Bacow’s appointment as Harvard’s president was the greatest yet of MIT’s famously elaborate pranks, or hacks. On a more serious note, Reif said that higher education’s challenging landscape needs someone like Bacow to help lead it.

“It is my dearest hope that, with the inspired leadership of President Bacow, our great universities can prove their value to the nation once again. Moreover, while we continue to be a source of leaders and ideas and knowledge, I hope we can also be a source of healing, and wisdom, and a broad, deep ethic of service to the common good,” Reif said. “Larry, Harvard was in very good hands before you arrived. But at this moment, I believe Harvard needs you. Higher education needs you. And the country needs you too.”

In his remarks, Baker harkened back to childhood debates around his dining room table, and how his parents valued listening over speaking, because, Baker said, you learn something by listening, particularly when listening to someone who disagrees with you. Baker said part of the reason he is confident that Bacow will thrive is because he is a listener.

Bacow thanked those who supported and assisted him over the years, saying “nobody gets anywhere of consequence in this world on his or her own.” He said Harvard too made him better, as it has many students over time, “spurring all of us to summit mountains we never imagined we could climb.”

Bacow answered those doubts with a resounding affirmative. Higher education not only has made the American Dream accessible for generations, its commitment to the pursuit of excellence, openness to disruptive ideas, and creation of an informed citizenry — considered crucial by the nation’s founders — helped create the America around us today.

“We need, together, to reaffirm that higher education is a public good worthy of support — and beyond that, a pillar of our democracy that, if dislodged, will change the United States into something fundamentally bleaker and smaller,” Bacow said, adding later, “We must defend the essential role of higher education in the life of our nation and the broader world.”

Bacow reached into history to highlight how past U.S. presidents understood, even during dark times, that higher education was a national strength. Abraham Lincoln during the Civil War signed the law that created land-grant universities, while Franklin Roosevelt signed the G.I. Bill just after D-Day, creating a pathway to learning for those who served.

“Every such expansion of higher education, every move toward openness to those previously excluded, has brought the United States closer to the ideal of equality and opportunity for all,” Bacow said. “So higher education has not only supported our democracy, but in some sense it has created it — and we are nowhere near done.”

Bacow discussed the importance of a liberal arts education at a time when not just truth but facts themselves are increasingly under assault, saying that it is the University’s responsibility to educate students to become discerning consumers of news and arguments, and ultimately “sources of truth and wisdom themselves.”

He hailed the growth of diversity on campus, but said that diversity has to encompass ideological diversity — welcoming ideas with which we disagree — as well as diversity of race, ethnicity, sexual orientation, and economic status, among other factors.

“We need to teach our students to be quick to understand, and slow to judge. And as faculty, we owe this duty to each other as well,” he said.

Bacow laid out initiatives to help Harvard create excellence and support it across the country. He said the University will work to raise money to support public-service internships for undergraduates who want them, and called for collaborations with other colleges and universities to hold down rising costs by sharing research infrastructure and housing and initiating exchange programs that eliminate redundancies in curricula.

“I look forward to working with my colleagues at Boston-area institutions to explore how we can collectively do a better job of serving both our students and society,” he said.

Bacow, a child of immigrants, also outlined the benefits of allowing students and faculty from other nations to come to America to study and live, citing the facts that more than a third of Nobel Prizes awarded to Americans in chemistry, medicine, and physics since 2000 have gone to those born elsewhere, and more than 40 percent of Fortune 500 companies were founded by immigrants or their children.

“America has to continue welcoming those who seek freedom and opportunity, lest we shut the door to the next generation of great entrepreneurs, scholars, public leaders, and, dare I say, university presidents,” Bacow said.

The chair of the inauguration steering committee, Harvard General Counsel and Senior Vice President Robert Iuliano, said the event was bigger than an inauguration, serving also as a gathering and celebration of the large Harvard community.

“This inauguration is so much more than the installation of a president. It is a true celebration of the Harvard community, and we are thrilled with the way in which the community has turned out with enthusiasm, support, and pride for this historic gathering,” Iuliano said.

“We owe debts of gratitude to the community for warmly welcoming Larry and Adele [Bacow] with open arms; to those whose spaces and schedules were affected by the logistical quirks inherent in planning a large-scale event for their grace and hospitality; to the many departments, individuals, units, and Schools that provided ideas, content, volunteer hours, and much more for aiding us in creating a robust and truly spectacular program; and to the many dedicated alumni and friends of Harvard who traveled [from] near and far to demonstrate just how much this University means to them, and for their unending support.”

Throughout the two days, food and music were constantly on hand. On Thursday evening, a musical performance at Sanders Theatre was followed by a dessert reception at nearby Annenberg Hall. Friday morning featured a Taste of Harvard breakfast, followed by a series of academic symposia and a luncheon at Annenberg Hall and the Science Center Plaza. The symposia showcased the breadth of Harvard scholarship, addressing the science of behavior change, confronting inequality, dignity in modern democracy, data’s role in understanding the world, the future of medicine, the origins of life, the power of stories to influence our lives, and “A Look Across Harvard,” a series of short talks featuring one faculty member from each Harvard School.

The inaugural events wrapped up with the block party, with fall-themed food, cider, and more music. Attendees flowed from Tercentenary Theatre toward the stage, refreshment tents, and tables in the Old Yard next door.