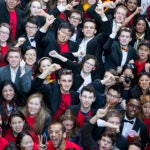 Learning through others broadened their sense of how the wider world works, recent grads say

This is the fourth installment in Learning from Difference, a series on diversity at Harvard.

Coming into a complex, diverse community isn’t always comfortable. Ben Grimm ’18, for example, “sort of dreaded” taking part in the freshman week activity known as Community Conversations. “You sat down with people you just met and discuss race and personal diversity,” he said.

But to his surprise, the self-described “white, gay, male, nonreligious” student found himself listening intently to a new classmate, a young woman who talked about growing up as a Muslim in South Dakota, and found he wanted to continue the conversation. Coming from Canandaigua, N.Y., Grimm had not only never interacted with a Muslim woman, but realized that, “I didn’t know what to call the religious garment she wore on her head.” Grimm, who ended up concentrating in the comparative study of religion and German and Scandinavian studies, asked the woman, Zarin Rahman ’18, and she told him he could simply call it a headscarf. That was the beginning of a friendship that has lasted through their Harvard undergraduate years.

For Rahman, a key experience in encountering diversity was yet to come. The daughter of parents who had left Bangladesh, the neurobiology concentrator came to Harvard expecting “a global education.” She also learned something more personal.

Having lived in Indiana and Kentucky before moving to South Dakota, Rahman was accustomed to being “the only Muslim, the only brown, the only female” in the room, she recalled. For that Community Conversation, “I’d spoken about being a minority student and how instead of making me feel oppressed or disenfranchised, it presented the opportunity to educate others,” she said.

This was a familiar role.

“I had grown up in a very white, very homogeneous environment, and I had learned how to become friends of the people I had grown up with,” said Rahman, who is planning a year of research before applying to medical school. For her, the challenge presented by Harvard’s diversity was more subtle: “I had to learn how to become friends with people who were like me but who had [also] grown up with people like me.”

She explained the novelty of “being religious without having to translate and explain, ‘Oh, I do this because…’

“Going to mosque together, fasting together: I had done that with my family — my mom, dad, and little sister — but I had to get used to the vibe of the community. It was just different,” she said. The broad diversity at Harvard showed Rahman that she was in some way “a small-town Midwestern teen.”

“It required us to reorient our stances and understand where we were coming from. … It made us stronger friends, stronger intellectual partners.”
— Cengiz Cemaloglu

Jasmine Chia, who came to Harvard from Thailand to study government and economics, sought out diversity as an intellectual component of her education. “A lot of the writing in political science and economics is still very much Western-centric and still very much American-centric,” said Chia, who also served on the student advisory committee for the Harvard Foundation for Intercultural and Race Relations. “So I found myself reaching out to my peers to enrich my education.”

The experience offered some unexpected challenges. “I grew up in a Buddhist society, almost entirely homogeneous,” she explained. Therefore, she was surprised when she and her friend and fellow student advisory committee leader, Cengiz Cemaloglu ’18, from Turkey, had a brief falling out while discussing the results of Singapore’s 2017 presidential election.

“Cengiz was super-excited,” recalled Chia. For Cemaloglu, who grew up Jewish in a predominately Muslim country, the import of the election was that a moderate Muslim woman would be taking office for the first time. For Chia, the reports of government interference held sway. “I was furious,” she said.

“It required us to reorient our stances and understand where we were coming from,” Cemaloglu said. “We pushed each other to grow more, to understand more. It made us stronger friends, stronger intellectual partners.”

Because of this wider scope, said Chia, “I got to engage in conversations that don’t really have an answer.”

Those conversations included the future — and the careers on which these recent graduates are now embarking. In their junior year, for example, Cemaloglu and Chia organized a panel discussion on capitalism and morality. The panel, which drew a standing-room-only crowd, addressed how students’ backgrounds and expectations play into what their lives after Harvard may hold.

“If you’re willing to engage with a diverse group of students, then Harvard gives you that opportunity to learn the kind of mosaic of identities that America has. If I wasn’t at such a diverse campus, it would be like an unfinished puzzle.”
— Zarin Rahman

Cemaloglu, who spent the summer before his senior year at Goldman Sachs, said, “If an African-American friend of mine goes into finance, he gets more scrutiny than if a white friend of mine goes into finance, just because there’s an added expectation that he should care for his community. My white friend is seen as neutral,” he concluded. “He can take care of himself.”

Cemaloglu, who wrote his senior thesis on Islamic finance in Malaysia, found his time in the corporate world interesting. “I came from a low-income family, and I wanted to try it out,” he said. However, this month he begins what he described as his “dream job” with ReD, a consulting firm in Copenhagen. He’ll be doing long-term, ethnographically based strategy research on “what’s going to be the next big thing in clothing or chairs, and giving that research to governments, NGOs, and corporations.”

“I studied anthropology in part because it is one of the few disciplines left that advocates aggressively for getting to know the other,” he said. “The whole premise of anthropology is us living with people who are not like us and trying to look at the world through the lens of the other person — trying to see the same things that we see about ourselves through their point of view.”

Such breadth, say his classmates, has been one of the implicit and ongoing benefits of an increasingly diverse Harvard.

“I lived with women of color from various social backgrounds and different parts of the world,” said Chia. Now on a Pforzheimer Fellowship, Chia plans to spend the next few months helping refugees in Bangkok before starting work with a public-sector consulting firm in Washington, D.C. “That not only helps me cultivate empathy. It literally changed the way that I live, and it changed the person that I am.”

Ultimately, say these students, Harvard’s emphasis on a multifaceted student community enriched their education in ways they never expected.

“On paper, we’re massively different,” said Grimm. Rahman, he noted, was likely fasting for Ramadan even as he spoke, while he was “gorging on my family’s food” back home in Canandaigua. “But we’re totally alike in personality, which is a lesson in itself.”

“We’re all similar. We all care about diversity. We all care about something,” agreed Rahman. “If you’re willing to engage with a diverse group of students, then Harvard gives you that opportunity to learn the kind of mosaic of identities that America has. If I wasn’t at such a diverse campus, it would be like an unfinished puzzle.”