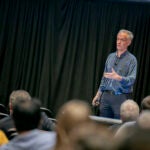 When Ellen Johnson Sirleaf was elected Liberia’s president in 2005, she had a difficult decision to make: Where to begin?

Ravaged by two civil wars that spanned 15 years, with a two-year interlude in the late 1990s, the country had seen its economy collapse, and worse. Schools and hospitals had been looted and destroyed, roads had deteriorated, and civil society was in disarray.

In short, Liberia needed everything.

But Sirleaf knew that she couldn’t deliver everything, she said Wednesday at Harvard’s Loeb House, and she also knew that to try would have robbed her of an opportunity to move her country forward in important ways. She chose education as her primary focus, reasoning that such a priority would both provide a foundation for her nation’s future and instill hope in a generation of youth who were already too familiar with war.

But the situation was bleak. Government-run schools were in ruins, and many of the country’s remaining teachers were unqualified. Also, teacher colleges had been destroyed, so the nation had no means to train a new generation of educators.

But Sirleaf persevered, building and repairing schools, getting kids back in classrooms, and working to improve teacher qualifications and quality of education. Special programs were developed for students with special needs, such as the child soldiers who were typically three times the age of classmates.

After two years, Sirleaf said, 194 schools had been built, and over 10 years the government-supported student population increased from just a few thousand to 1.5 million. There’s still a long way to go, but her administration — which ended when she left office in January — provided an important start, she said.

Sirleaf spoke during the closing session of the Harvard Ministerial Leadership Program. The program has two sessions each year, one for finance ministers and the second for health and education ministers. The focus is on leadership, priority-setting, and other skills that are key to getting things done, such as collaboration, analysis of delivery systems, and developing budgets.

Awa Marie Coll-Seck, minister of state in Senegal’s Office of the President, is a former participant and member of the program’s advisory board. She attended four years ago when she was Senegal’s minister of health, at a time when she knew her goals but wasn’t sure how to achieve them. The program provides concrete ways to produce results, she said.

“I think if it was possible, it would be something every minister would do,” Coll-Seck said. “All the ministers are saying that, on Monday, when I will be back in my office, I will to start to implement what I have learned here.”

This year’s session, sponsored by the Harvard T.H. Chan School of Public Health, the Harvard Graduate School of Education, and the Harvard Kennedy School, was held June 10‒13 at Loeb House. Sixteen ministers from nine nations participated in discussions guided by faculty members at Harvard and former ministers, including University of Miami President Julio Frenk, past dean of the Harvard Chan School and Mexico’s health minister during its rollout of universal health care in the early 2000s. 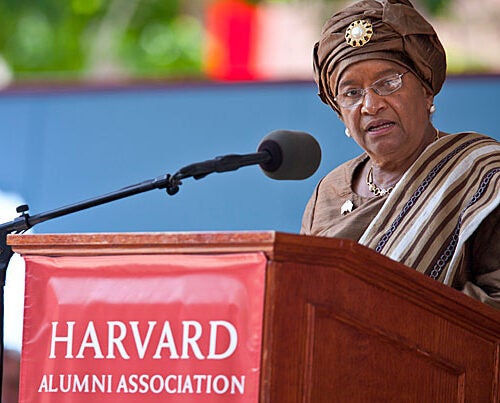 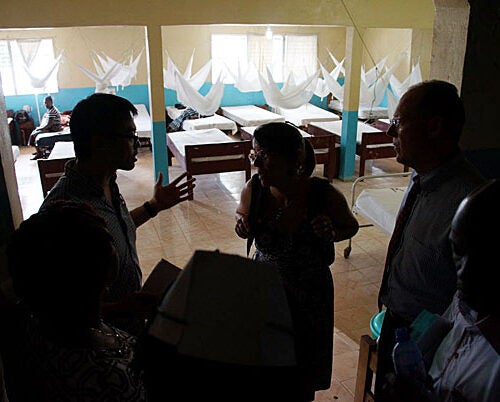 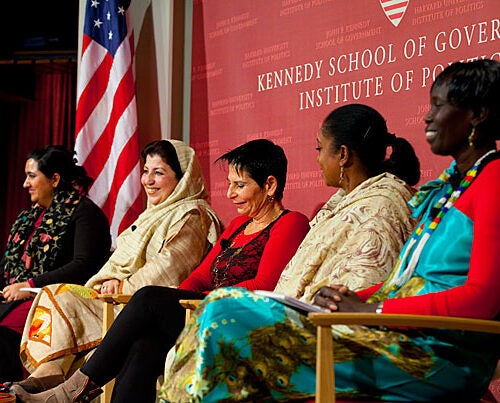 While post-war recovery was her early focus, the Liberian leader also faced the devastating 2013‒2016 Ebola epidemic, which was a blow to progress already made.

Government measures to limit movement, in an effort to keep the disease from spreading, were met with resistance from citizens who saw fleeing the country as life-saving action, Sirleaf noted, adding that leaders faced a “crisis of confidence.”

When the World Health Organization projected that the epidemic would claim 1 million lives if not curtailed, Sirleaf pushed for a new strategy. She and other national leaders realized that they couldn’t defeat the epidemic by fighting against their own people, and began to seek help at the community level.

Sirleaf also appealed for international help, which was slow in coming, and made a point of touring hospitals and clinics in an effort to rebuild faith in the government.

The epidemic, which wound up infecting nearly 11,000 Liberians and killing nearly 5,000, highlighted weaknesses in the nation’s health system, Sirleaf said, but it also spurred the development of vaccines that are now being used against an outbreak in the Democratic Republic of Congo.

Sicily Kariuki, who took office as Kenya’s minister of health four months ago after serving as minister of youth, public service, and gender for three years, said that citizens expect immediate results from ministers who in some cases are still getting acquainted with their new responsibilities. When she heard about the Harvard program just a few days into her new job, it sounded like just what she needed.

Among Kenya’s challenges, Kariuki said, is President Uhuru Kenyatta’s promise of universal health coverage by 2022. The size of that challenge is illustrated by current coverage rates — just 17 percent of those employed in the “formal” business sector, and perhaps 2 percent among the majority of workers, who are employed in small business and as sole proprietors in the “informal sector.”

The chance to hear from other ministers made the Harvard event particularly valuable, she said, along with networking opportunities and access to expert views.

“It was worthwhile, every moment of it,” Kariuki said. “I go back with a higher confidence level. I go back with new tools to manage.”