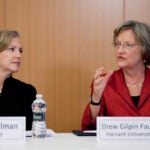 Liberian President Ellen Johnson Sirleaf, Africa’s first elected female head of state and a Harvard Kennedy School alumna, has won the 2011 Nobel Peace Prize. She shares the award with Leymah Gbowee, an African peace activist whose work helped to end the Second Liberian Civil War in 2003, and Tawakul Karman, a journalist and human rights activist who has been a major player in the effort to topple Yemen’s authoritarian regime.

The Nobel Committee awarded the prize to the three women on Friday for “their nonviolent struggle for the safety of women, and for women’s rights to full participation in peace-building work.”

Sirleaf was elected in 2005 after years of fighting and civil unrest in Liberia. She has worked to stabilize and restore the country through an emphasis on economic reforms, a strong stance against corruption, and a commitment to infrastructure and establishing strong international ties.

Sirleaf studied economics and public policy at the Kennedy School, where she was an Edward S. Mason Fellow, earning her master’s of public administration in 1971. As a Mason Fellow, the Nobel laureate took part in a yearlong, co-curricular program that complements the School’s Mid-Career Master in Public Administration. The fellows are exposed “to the ideas and strategies of leading thinkers and practitioners in economic, political, and social development. The emphasis of the Mason Program is on developing the broad range of analytical and leadership skills required to initiate and to implement major political, social, or economic change.”

“Over the course of her nearly 40 years in public service, President Sirleaf has endured death threats, incarceration, and exile, all the while challenging the inequality, corruption, and violence that defined life in Liberia for so long,” Harvard President Drew Faust said in March. “We are proud to welcome such a respected African leader and active proponent of democracy to speak on Commencement Day.”
During her Commencement speech, Sirleaf thanked Harvard for inspiring her as a young woman to make a difference in the world.

“It is difficult to imagine achieving all that I have without the opportunity to study at Harvard. It is, therefore, for me a profound honor to be counted as an alumna. I salute my fellow graduates who share that rich heritage of academic excellence and the pursuit of truth.”

She also told the crowd of the progress made in her damaged country, accomplished largely through the strength and determination of its women.

“We have moved our war-torn nation from turmoil to peace, from disaster to development, from dismay to hope. And it was the Liberian women who fought the final battle for peace, who came — their number and conviction the only things greater than their diversity — to demonstrate for the end to our civil war. I am, therefore, proud to stand before you, humbled by the success in representing the aspirations and expectations of Liberian women, African women, and, I dare to say, women worldwide.”

Fellow Nobel laureate Gbowee also has a tie to Harvard. In 2007, the Kennedy School’s Women’s Leadership Board honored Gbowee with the Blue Ribbon Peace Award. The annual honor is given to individuals and organizations that have made a significant contribution to building peace through strategies that promote women’s leadership on the issue.

Four other Harvard alumni have been recognized with Nobels this week. For the Nobel Prize in physics,  Saul Perlmutter ’81, and Brian P. Schmidt, Ph.D. ’93, and Adam G. Riess, Ph.D. ’96, who both received their Ph.D.s from the Harvard Graduate School of Arts and Sciences. For the Nobel Prize in physiology or medicine, the late Ralph M. Steinman, Harvard Medical School ’68, was honored posthumously.