There is plenty that’s striking about Phoroncidia rubroargentea, starting with size — at just 3 millimeters, the spiders are barely larger than a few grains of salt.

But the reason the Madagascar species grabbed Sarah Kariko’s attention had more to do with their color.

Unlike many other species, which gradually lose their color when preserved in ethanol, the spiders dazzled with shimmering red and silver, even after decades of preservation.

“I was sorting through specimens from my expeditions to Madagascar and these little red spiders kept catching my eye,” Kariko said. “I asked a colleague, ‘Have you ever seen this before?’ When I started going through the same spider species on the shelves in the collection and then began examining specimens from other museums they looked like this, too, so I started asking: How is this happening? What is going on here?”

Those questions were the start of a journey that would lead Kariko and several other Harvard researchers — plus two scientists from the Weizmann Institute of Science — to investigate how the spiders produce their distinctive colors and why the colors are so surprisingly durable.

Their findings, published in February as a cover article in the Journal of the Royal Society Interface, show that the spiders use a combination of strategies to produce their colors, with a tough cuticle layer providing protection.

“We don’t yet know exactly why these spiders have this coloration,” Kariko said. “There are many visual predators, like chameleons, in the forests where these spiders are found, so it’s possible this may be a warning or protective coloring. With this paper, we’ve made some inroads into how they make these colors, but the why is still a mystery we hope to eventually unravel.”

Early in the research, Kariko teamed with James Weaver of the Wyss Institute and Mathias Kolle, then in the lab of Professor Joanna Aizenberg, now a professor of MIT. Kolle performed spectroscopy measurements.

The group quickly realized they also needed someone with both special skills in material science and the manual dexterity to work with the tiny spiders, which led them to Wyss postdoctoral fellow Ling Li.

Li, who is now a professor in Virginia Tech’s Department of Mechanical Engineering, used an array of imaging techniques to examine the colors in precise detail. 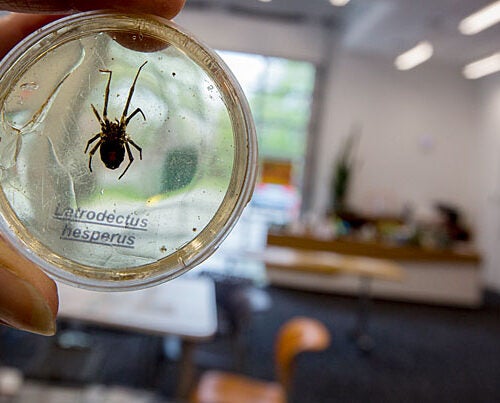 Spiders to the rescue

At Ed Portal, students learn the benefits of helpful arachnids

The team expanded to include Jaakko Timonen, then of SEAS, now at Finland’s Aalto University, who conducted detailed fluorescence imaging of the specimens, as well as Carolyn Marks, biological imaging scientist at the Center for Nanoscale Systems, who helped examine very thin slices of the spider.

It quickly became clear to the researchers that the silver color was the result of a material similar to that found in reflective fish scales.

The structure functions, Kolle said, by stacking a series of highly reflective 100-nanometer thick plates (about 1/1,000th the width of a human hair). Each plate reflects light at a slightly different wavelength and those wavelengths either cancel each other out or add up to produce color.

“Ling’s analysis brought this out beautifully,” Kolle said. “We were able to image these platelets and show that they have a specific thickness, but there is no specific control of the spacing between them. That means some areas might filter out red and reflect it strongly, and other areas might do the same for blue or for green. When you add all that up, you get the silver color.”

“We were able to show that this silver color is structural,” Li added. “So that explains why the color doesn’t fade away — it’s built into the structure.”

The team also found that the red, which is nonstructural, holds up in ethanol because the pigment is trapped in an array of microspheres only about one micron in diameter.

“To the best of our knowledge this is something unique, I think, in terms of spiders,” Li said. “We don’t yet know the exact chemical components of the pigment, but it appears these microspheres contribute to the stability of the red color.”

The color protections don’t end there.

“It is likely the colors’ stability is also enhanced by an outer cuticle layer,” Li said. “This is a hard-bodied spider, so that cuticle surface is relatively thick and hard, and robust, which could provide additional mechanical and chemical stability. Around the silver color, the cuticle is very uniform and transparent, but in the red area, it is modified to include additional pigment, which adds to the red color.”

The team’s analysis also uncovered evidence of an unusual phenomenon, “twinning,” in the production of the silver color. Two scientists from the Weizmann Institute, Leslie Leiserowitz and Dvir Gur, brought their expertise in crystallography to help the team identify the characteristics of atomic arrangement of these guanine crystals by using the data acquired by Li and Kariko.

“These plates are made of guanine crystals — the same material found in reflective fish scales — but in this case, the plates are not a single crystal; there is a twinning plane that runs parallel to the orientation of the crystal. Essentially, there are two crystals facing each other so the atoms are arranged in mirror symmetry.”

Though such structures have been observed in two other animals — copepod bodies and scallop eyes — P. rubroargentea is the first known example of twinning in arachnids, Kariko said.

P. rubroargentea is also the spider that inspired Kariko to create the Spider Super Hero Program. The initiative, designed initially for pediatric oncology and hematology patients at the Floating Hospital for Children and later expanded to Harvard’s Museum of Natural History, has reached more than 200 children. Participants take part in an imaginary expedition around the world to meet many different spider species and learn about adaptations (or “superpowers”) that help them survive.

“There are many ways to be inspired by the natural world,” Kariko said. “The hope is this program can help open our eyes to the beauty and possibility from even the littlest creatures among us.”