Spiders to the rescue 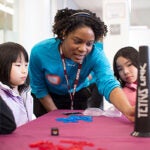 At Ed Portal, students learn the benefits of helpful arachnids

“We seem to have lost a fang.” File that under things you probably don’t want to hear in a workshop about spiders.

Luckily, the aforementioned missing fang was made of foam, and was used to help a group of local 8- and 9-year-olds learn about the anatomy of a spider. The students, who are part of the Gardner Pilot Academy’s after-school program, were at the Harvard Ed Portal in Allston for a workshop titled “Spider Superheroes.”

The program was created by Sarah J. Kariko, research director of Gossamer Labs LLC and an associate in Harvard’s Department of Organismic and Evolutionary Biology, and it was adapted in collaboration with the Harvard Museum of Natural History. It was funded in part by a grant from Creativity Garden, a nationwide project of the Association of Science-Technology Centers, which is supported by the Walt Disney Co.

“Spider Superheroes” teaches students all about spiders, and some of the remarkable things they can do. For instance, the students learned that some spiders can jump long distances, dance, live underwater, balloon through the air, change colors, and sometimes even be mistaken for jewels.

Though many people fear spiders, the truth is that they’re far more helpful than harmful.

Students learned how spiders help to keep insect populations in check, learned about their extraordinary sense of touch, and learned how some spiders spin strong, intricate, complex webs that they use to catch their prey — webs they never seem to get stuck in themselves.

Their task was to travel around the world in their imaginations and meet some spider superheroes along the way. Then they were to come back to the Ed Portal and design their own superhero who could help them solve a real problem — or a challenge — of their own choosing.

During their trip, they “met” pelican spiders, scuba spiders, beautiful peacock spiders, spiders that performed nighttime ballets, and even ballooning spiders that covered Charles Darwin’s ship, the HMS Beagle, with gossamer silk off the coast of Argentina in 1832.

When their travels were complete, the students got closer to various types of spiders, but this time live and in their exoskeletons. They looked on, some in trepidation and some in awe, as Wendy Derjue-Holzer, education director at HMNH, positioned a live tarantula for students to view.

“Does she bite?” one student asked.

“Not unless you’re a cricket. Are you a cricket?” replied Derjue-Holzer.

“Do you know what tarantulas really like? They like to use their fangs to make cricket milkshakes. They don’t actually eat the bug like you would eat something. They stick their fangs right into the cricket, inject digestive enzymes, and suck out all the juicy bits. Delicious,” continued Derjue-Holzer.

Remarkably, none of the 30 students seemed squeamish or frightened by the spiders (though 8-year-old Jeffery Blanchard did say that his mother would be scared). The students picked up the spiders’ cases, studied their movements, and made drawings. Eight-year-old Sean Quirk desperately wanted to see the tarantula eat the cricket. Much to his disappointment, she — yes, the tarantula is a girl — didn’t comply.

Students took their observations and got down to business designing their own superheroes to help solve a problem. Some students created spiders to help clean up litter, spiders to help construction workers lift heavy objects, and even spiders to help them with their math homework.

Quirk created a spider superhero that would “stop bad guys by putting them in a chair and weaving a web around them to tie them up until the police came.” He designed this while watching to make sure he didn’t miss any cricket milkshakes.

Gustavo Moreira, 9, of Allston, made a spider that helped people stop smoking by using its legs to break their cigarettes.

“We are so fortunate to bring Sarah and Wendy and their ‘Spider Superheroes’ program to the Ed Portal. The students were excited to learn about spiders, a creature we all come into contact with on a fairly regular basis. I think that when they left the two-hour class they had gathered enough information to understand how valuable spiders are to the environment, and for many children fear was cast aside and replaced by wonder!” said Joan Matsalia, associate director of Harvard’s Public School Partnerships team.

“I hope today’s class helped some [of the students] lose their fear of spiders,” said Keyla Veloz, a teacher who accompanied the class to the Ed Portal. “Some of the kids have been learning about insects in science class, so the timing for us was really very fortunate. It was nice to have them come and make the connections and build upon what they had been learning in class.”

You can learn about spiders and see the tarantula yourself by visiting the Harvard Museum of Natural History, which is open daily from 9 a.m. to 5 p.m. Admission is free to Massachusetts residents every Sunday morning from 9 a.m. to noon and on Wednesdays from 3 to 5 p.m., September through May.