Moving beyond the scientific nudge 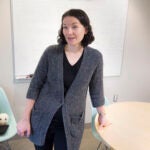 How cognitive psychology and cultural sociology can benefit each other

For decades, cognitive psychologists have sought to understand how the brain works and in recent years have outlined a number of theories — from implicit biases to the psychology of scarcity and tribalism — to explain how that influences our behavior.

But some researchers now suggest that those theories, while providing valuable insight, only capture a portion of a more complex picture.

In a study published recently in Nature Human Behavior, Michèle Lamont, the Robert I. Goldman Professor of European Studies, professor of sociology and of African and African American Studies, and director of the Weatherhead Center for International Affairs, argues that to capture a fuller picture of human behavior, a new approach is needed, one that bridges the space between sociology and cognitive psychology.

“Our idea was to try to create a dialogue between those two approaches,” Lamont said. “The hope is that will be fruitful in encouraging people to think more broadly … about what factors enable and influence human behavior.”

To do that, Lamont and graduate students Laura Adler, Bo Yun Park, and Xin Xiang examined three popular streams of research on human behavior — studies using the implicit-association test, scarcity theory, and the dual-process model of moral decision-making — and attempted to show how cultural forces played a role in each.

“What my collaborators and I did [in this paper] was to show that … we make sense of the world using the cultural scripts we are exposed to at a much broader level,” Lamont said. “When you think of the American dream, that is a framework or a narrative to interpret your reality which is quite different from the kinds of national myths that exist in other contexts.

“For instance, in the U.S., the tools that are made available to us to think about what defines a good life or what defines the worth of people center far more on the notion of economic success,” she added. “But when you compare the U.S. to another country like France, inductive research shows that conceptions of success and morality vary a lot … These available scripts affect the likelihood that people interpret reality in one way or another.”

But measures like the implicit-association test, which uses the speed with which people connect images with things perceived as good or bad as a metric for hidden bias, fall short of capturing cultural backgrounds, Lamont said.

“If you run this test using images of President Obama and President Reagan, it’s not necessarily the case that I push the button faster because I like Obama more,” she said. “The speed of the response is also influenced by the degree of familiarity I have with each. In fact, variations in speed might have nothing to do with my beliefs about Obama or Reagan, but instead result from the fact that images of Obama are far more salient than images of Reagan in my environment. So it might tell you about the salience of the image more than it tells you about your attitude toward the image.”

The difference between salience (something being familiar) and evaluation (something being viewed as good or bad) becomes essential when researchers try to draw a connection between response times in the implicit-association test and social outcomes such as discrimination. Whether or not response times indicate an increased likelihood that the person will discriminate depends on the cultural repertoires used to evaluate people of different races, genders, or other characteristics.

That’s not to suggest the tests have no place in understanding human behavior.

“We’re simply warning that the test … does not distinguish between what is salient to the mind and what is culturally valued in the environment,” Lamont said. “To better interpret the results, we believe researchers need to take into consideration the prevailing cultural landscape (or repertoires) in which people are functioning, and that goes beyond what is between people’s ears.”

Lamont, who is past president of the American Sociological Association, found similar issues with theories about both scarcity and morality.

“Scarcity theory is the idea that, because of a lack of resources, low-income people are tunneling (or focusing their attention exclusively on the scarce resource) … which leads them to make errors of judgment that could be avoided,” she said. “But how people make sense of their world should be empirically documented.” To understand why someone who lacks money makes decisions that appear economically irrational, researchers need to understand how the person values different resources (time, money, family connection, social status) and how the person prioritizes competing demands for attention and resources.

A group of researchers studying moral judgment suggested that two competing cognitive processes produce sometimes conflicting moral judgments: The slower, more deliberative process produces utilitarian moral judgments, and is often viewed as preferable to the deontological — or rule-based — morality that results from fast, intuitive processes. Lamont and her colleagues suggested a need to re-examine the cultural assumptions baked into this model in order to understand how people come to make different moral decisions.

“We think the way this frames how people make moral decisions is not in line with how people think about morality in everyday life,” she said. “To capture the place of morality in people’s lives, we should focus less on hypothetical scenarios such as ‘trolley dilemmas’ than on understanding the cultural ideas that undergird people’s understandings of what it means to be a good mother or a good friend.”

Lamont said that the paper is not intended to impugn the work of cognitive psychology but to open a dialogue between two fields that often approach similar questions from different angles.

“This is more about raising awareness of the aspects in the environment which they tend to put in the background, and which we think should be in the foreground,” she said. “We want to factor in a broader causal chain that they have been thinking about, and that requires creating intellectual interfaces where we can discuss where their analysis stops and where other approaches begin.”