For this flower, it's ready, set, launch 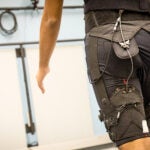 An exosuit tailored to fit

Flowers are just about the last thing in nature you’d list as fast, but the mountain laurels’ filaments are an exception.

The defining characteristic of the flowers, which are native to the eastern United States, is a series of 10 arms or filaments that act like catapults, flinging pollen into the air with startling speed.

To understand how those filaments work and why they evolved that way, a team of researchers, including recent Harvard Ph.D. Callin Switzer (now a postdoctoral fellow at the University of Washington), Robin Hopkins, assistant professor of organismic and evolutionary biology at Harvard and a faculty fellow of the Arnold Arboretum, and Stacey Combes, a professor at the University of California, Davis, used high-speed video to determine how fast the filaments move and to show how they target likely pollinators. The study is described in a recent paper in the journal American Naturalist. 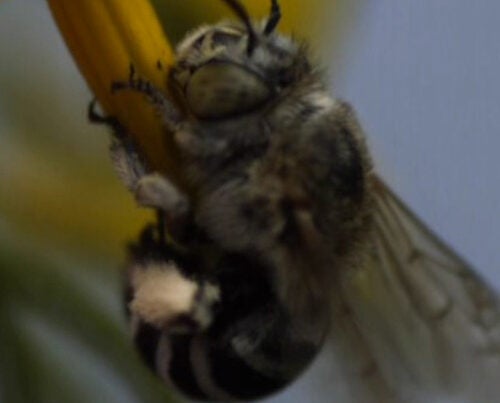 Bee strategy gives researcher pause: ‘Is it doing what I think it’s doing?’

“Those filaments are under tension, so when an insect comes along and pulls at them, they launch the pollen onto whatever is there,” Switzer said. “There had been two longstanding hypotheses about these catapults. One was that they’re used for wind pollination. But our findings point to the idea that the pollen attaches to pollinators that are likely to take it to another flower.”

Those filament catapults are actually long stalks that end with the male part of the plant, called the anther. When the flower develops, the anthers become stuck in tiny pockets on each petal. As the petals open, they pull back on the filaments, increasing the tension on them, and in effect leaving the catapults ready to fire.

To understand the speed of those catapults and what they target, Switzer, Hopkins, and Combes conducted four studies.

The first focused on the biomechanics of the catapults and tried to quantify how fast they fire pollen. The second created a heat map showing where the pollen was launched, while the third examined which pollinators visited the flowers. The final study involved preventing pollinators from visiting the plants as a way to investigate their ability to self-pollinate.

The researchers’ findings put the mountain laurel in rare company as one of the fastest-moving plants on the globe. When triggered, the catapults launch the pollen at more than 400 times the acceleration due to gravity, reaching a top speed of about 8 miles an hour.

The evidence also showed that the catapults launch pollen toward the center of the flower, Switzer said, leading to a hypothesis that they might be triggered only by larger insects, like bumblebees, which are likely to land there and carry pollen from one flower to another.

“It looks like pollinators play a really important role in fertilizing these flowers,” Switzer said. “In one of our later experiments, we bagged some flowers in the Arboretum to prevent pollinators from visiting them … and they hardly produced any seeds.”

While the study quantifies the speed of the catapults, Switzer said many questions remain about the mountain laurel’s flowers.

“This plant still has a lot of mysterious properties,” he said. “Usually, bees will collect pollen and use it as a protein source, (but) we don’t know whether bees actually collect the pollen from these flowers. The plants also produce almost no nectar, so the bees that visit don’t get much of a reward for visiting, so it’s somewhat of a mystery to us why they visit the flowers.

“There are definitely a lot of unanswered questions. We don’t know where the pollen is attached to the bees, and we don’t know whether some of the catapults are triggered by wind or weather,” Switzer added. “If the flower isn’t pollinated, we know it will stay open for as many as 20 days, and we don’t know anything about whether the catapult changes or develops more of a hair trigger as it ages … so there are a number of interesting areas to follow up on.”