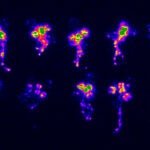 Bee strategy gives researcher pause: ‘Is it doing what I think it’s doing?’

As part of an investigation into how bees native to Australia pollinate tomato plants, Callin Switzer and colleagues stumbled onto a surprising find — to shake pollen out of the cone-shaped flowers, blue-banded bees bang their heads against them at a rate of 350 times per second.

“It was pretty unexpected — it just made me think of heavy-metal bands,” said Switzer, a Harvard graduate student in the lab of Assistant Professor of Organismic and Evolutionary Biology Robin Hopkins. “I had shot some video of bees at the Adelaide Botanic Gardens, and when a colleague and I watched it, we said to each other, ‘Is it doing what I think it’s doing?’”

“Most of my work is on pollination and native bees like bumblebees,” he said. “When farmers bring in bees to pollinate their crops it’s most often honeybees, but certain plants — including tomatoes — can’t be pollinated by honeybees because of the way the plants release pollen.”

While researching how bees native to Australia pollinate tomato plants, Harvard scientists stumbled onto a surprising find — to shake pollen out of the cone-shaped flowers, Australian blue-banded bees actually bang their heads against them at the headache-inducing rate of 350 times per second.

Some flowers, Switzer said, are distinguished by a central, cone-shaped group of anthers, known as the anther cone, which releases pollen only through small pores.

In most of the world, the job of shaking the pollen free falls to bumblebees.

Studies have shown that the bees, which can be found in virtually every corner of the globe, pollinate the flowers by gripping the anthers with their mandibles, then using their powerful flight muscles to vibrate their entire body and shake the pollen from the plant.

One of the few areas where bumblebees aren’t native, however, is Australia.

That doesn’t mean tomato growers down under are out of luck. Local species — particularly the blue-banded bee — have taken up the tomato-pollinating mantle.

The question Switzer and colleagues first set out to answer was whether Australian bees behaved similarly to bumblebees when pollinating flowers.

“I was mostly interested to see if they were vibrating at the same frequency … and the amount of time they spend on each flower,” Switzer said. “There are some people who believe [those factors] may play an important role in how good bees are at pollinating, because if bees are visiting a greater number of flowers they’re probably more successful at pollinating.”

To get definitive answers on exactly how blue-banded bees were pollinating the flowers, Switzer spent several days at the Adelaide Botanic Garden with a high-speed camera.

“I started off getting videos that were zoomed out, because we can get good info from those, but when we looked at the video, it wasn’t clear if the bees were grabbing the anther with their mandibles,” Switzer said. “I went back the next day and zoomed it as close as I could get, and got videos of the bees banging against the flowers.”

While Switzer and colleagues did find that blue-banded bees spend less time on each flower than bumblebees, it remains an open question whether one strategy is better than the other. The answer is much more than an academic matter.

Approximately 8 percent of flowering plants ― an estimated 20,000 different species — are pollinated in the same way, Switzer said, so understanding the process could have effects beyond the farm and greenhouse.

“We wanted to get more information about bees in Australia because there is still an ongoing debate about whether people should import bumblebees to pollinate tomatoes,” he said. “We didn’t answer the question of whether blue-banded bees are equally good or better than bumblebees … but there are studies that show blue-banded bees could be a viable alternative to bumblebees in greenhouses, and our data shows they’re spending less time on flowers and buzzing at a higher frequency, and those seem like good things.”