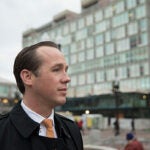 ‘The Space Between Us’

Martin Luther King Jr.’s legacy as a political thinker has long been overshadowed by a romantic view of the Civil Rights Movement he led until his assassination on April 4, 1968, say Harvard scholars Tommie Shelby and Brandon Terry, co-editors of the new book “To Shape a New World: Essays on the Political Philosophy of Martin Luther King Jr.”

GAZETTE: You say that a romantic view surrounding the Civil Rights Movement and King hinders our understanding of both the movement and of King’s legacy. Can you explain?
TERRY: We tend to tell the story of the Civil Rights Movement through romantic tropes, in which it becomes a story about unity built from the heroic sacrifice of great men. It’s a nationally bounded story. It’s a story that is heavily moralized about the transcendence of good over evil, in which all we were waiting for as a nation was to hear someone like Martin Luther King and the scales would fall from our eyes and we would see the errors of the past 300 years. It also tends to be a story about “becoming who we already were” — distilling our most deeply held values and bringing them up to be fully realized. The resonance with the sacrifice and redemptive suffering of the Christ story is really important as well. This can become problematic because we lose many of the movement’s radical ideas about economic justice, democratic experimentation, and overhauling the constitutional order. None of those things are on the table. They don’t even become questions we ask because we’re already telling ourselves a story where they don’t fit; even the geopolitics of the civil rights struggle fall out. We don’t understand that King always saw the Civil Rights Movement as part of a global struggle in a Cold War and anticolonial context. King was a global figure. He was traveling to India to meet with Jawaharlal Nehru in the 1950s, and attended the presidential inauguration of Kwame Nkrumah in Ghana. That all falls out of our conventional narrative.

GAZETTE: Can you give examples of King’s ideas that have been obscured by the dominant narrative of the Civil Rights Movement?
TERRY: One example is the “I Have a Dream” speech. Often people would listen to the speech and fixate on a powerful image of children holding hands as a way of thinking about the project of racial integration and racial justice without taking measure of where that kind of image fits in the broader architecture of King thought. For King, to have real integration meant sharing political power, uprooting metropolitan boundaries, rethinking how American federalism works, and rethinking school districting — not just busing programs. There is also King’s argument of using radical forms of political disobedience and direct-action protests to push the movement’s agenda. And that kind of experimentation with political coercion, even in Northern cities, to achieve justice is not the Martin Luther King people really know that well.
SHELBY: Another aspect that is not well known is that King is part of a broader tradition of black political thought that is grounded in a commitment to political ethics and to thinking about the values that should guide the response of the oppressed to injustice. King is in a tradition that goes back to slavery that focuses on values of self-respect and solidarity, avoiding hate and a whole set of principles that is supposed to guide a dignified response to unjust conditions.
GAZETTE: What were King’s views on war and racial injustice and economic injustice?
TERRY: King thought that Vietnam was an unjust war, and that it was a continuation of the French imperial project that America took up for retrograde reasons. King thought that our nation’s military conflicts reflect on us as citizens and that we’re accountable in part for the kinds of injustices our nation might conduct in the course of militaristic adventure if we don’t stand up in dissent. King also thought that having an imperial militaristic culture would have consequences that deepen other forms of structural injustice; it would take away from the commitment to a war on poverty and increase racial hatred by training people to kill people of color on the other side of the world.
SHELBY: It’s also important to remember that King pretty early on thought of the fight for racial justice and the fight for economic justice as deeply linked. King thought of the first phase of the Civil Rights Movement as focused on questions of racial justice that had to do with the fight against Jim Crow, humiliation, segregation, discrimination, and the denial of voting rights. But he thought it was important after securing the Civil Rights Act in 1964 and the Voting Rights Act in 1965 to begin to develop a movement focused more deeply on economic injustices, particularly those that beset urbanized blacks in the Northeast, Midwest, and the West. That struggle was going to be partly about jobs and fair wages, but also about how we share the gains of our economic cooperation and technological advancement. A lot of the problems we see in ghettos, such as crime, unstable families, and juvenile delinquency, King thought were rooted ultimately in economic injustice.

GAZETTE: If he were alive, what would King think of the Black Lives Matter movement?
SHELBY: King was very much aware of, and obviously condemned, police brutality and wrongful convictions, which are well-known aspects of the black experience in America. There have been some developments since he died, though, such as the dramatic growth in the number of people incarcerated. Drawing on his insights, I would emphasize the importance of the economic marginalization of many black and brown people and why that makes them vulnerable to aggressive police action and to being drawn into the underground economy and be incarcerated as a result. So, there is an issue of civil rights that needs to be connected to broader questions of economic justice. On the question of how to prosecute that struggle, King would always emphasize the importance of working in alliances or coalitions that cut across civil rights advocacy and labor movement advocacy to win over people who could be won.
GAZETTE: It has been 50 years since the assassination. How do you think King will be remembered 50 years from now?
SHELBY: Some of what we want to achieve is to bring King into both political philosophy and political theory as a subject of academic study and to put him in conversation with canonical classical figures who are wrestling with the same questions King was wrestling with, such as the justification of political authority and the distribution of economic goods, resources, and services. If we’re successful, we’d find King’s writings on syllabi across the curriculum in political philosophy and theory years from now. 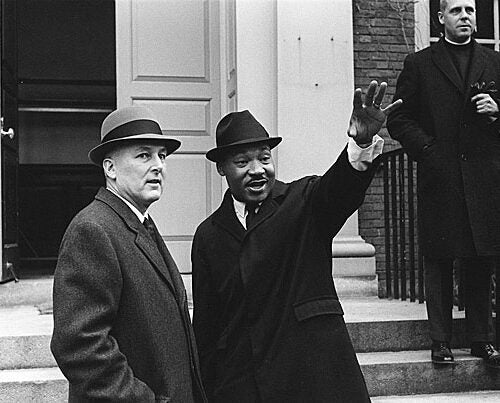 TERRY: Amen to all of that. I’d add two things. First, it’s important to treat black thinkers’ ideas as ideas and avoid thinking that their arguments can be reduced to tactics, or some other explanation about their class or group identity. We have to wrestle with the fact that they’re living with weighty questions of “What do we owe to each other?,” “How do we live?,” “What’s worth fighting and dying for?” The other thing is that we’d like to see King’s legacy among activists live on in an increased commitment to serious critical thinking, and in justifying one’s actions in public. Arguing about ideas in good faith with sympathy and charity to your opponents and those you disagree with is part of good political practice, and good as in virtuous, and King was an extraordinary exemplar of this commitment. If our collection of essays can help achieve that, we’d be thrilled.