Looking beyond D.C. debate, economist Cutler zeroes in on cost

A bipartisan group of lawmakers is working to address flaws in the Affordable Care Act while President Trump, upset at the failure of repeal and replace, threatens to gut the law by cutting subsidies to insurers. Republican leaders, meanwhile, seem intent on moving on to other legislative priorities.

David Cutler is the Otto Eckstein Professor of Applied Economics in the Faculty of Arts and Sciences and a professor of global health and population at the Harvard T.H. Chan School of Public Health. An expert on the economics of health care, he served as an adviser to President Barack Obama’s 2008 campaign. In a Q&A he talked about lessons repeal-minded Republicans might take from failure, out-of-control costs, the potential for bipartisan progress, and more.

GAZETTE: Is there a takeaway from the Republicans’ failed attempts to get rid of Obamacare?

CUTLER: I think there are probably a couple of messages. One is that one needs to pay attention to overpromising. What the public wants is for their health costs to be lower and for them to have more security. And given the existing structure, the existing cost of medicine and cost of doctors and so on, there’s no way to do that without spending a lot more money. The Republicans’ problem is that they promised that medical care would become cheaper and that government would spend less money. Those are conflicting promises and, in the end, they were promises that couldn’t be kept.

The second lesson is that we need to address the issue of why medical care costs what it does. We don’t have to spend what we spend on prescription drugs. And we don’t have to spend what we spend on doctors and administrative costs and hospital waste and inefficient care delivery and all that. If we really want to get better, we’re going to have to focus on that. All the talk about “Should there be one pool or two pools?” or “Should people get their coverage this way or that?” is avoiding the really hard questions of how are you going to make things cost less. Because if you could make them cost less, then you can do lots of stuff.

GAZETTE: Once things cost less, a lot of the political hurdles go away?

All told, we shouldn’t focus so much on what the Senate and the House got themselves bogged down in: the details of who’s going to be covered where. Should healthy people have to cover sick people? Should healthy people get to be in a different policy from sick people? Who’s going to pay for maternity care? Who’s going to pay for psychiatric care? Those are different problems from saying, “Hey, when we do need maternity care and we do need psychiatric care, how do we deliver it effectively?”

GAZETTE: How do we get from here to there, though? It seems like it’s not even a matter of having new ideas; we have to have a different conversation.

CUTLER: It is a different conversation. First, there are things that are not working great in the insurance exchanges and we need to fix those, because there are parts of the country where insurers don’t want to be, and that is a problem. It’s actually pretty easy to fix those issues. It’s been in a Republican bill; there have been Democratic proposals. The fighting was not over whether it’s possible to do that. The fighting was over whether to do much bigger stuff. So that would be easy enough to fix. If Republicans give up on the idea that they’re going to totally rewrite heath care in some less generous way, the two parties could fix the exchange problems in a month if they wanted to.

GAZETTE: We’ve heard rumblings of Democrats and Republicans getting together for a bipartisan solution, with fixing the exchanges being No. 1 on their list. 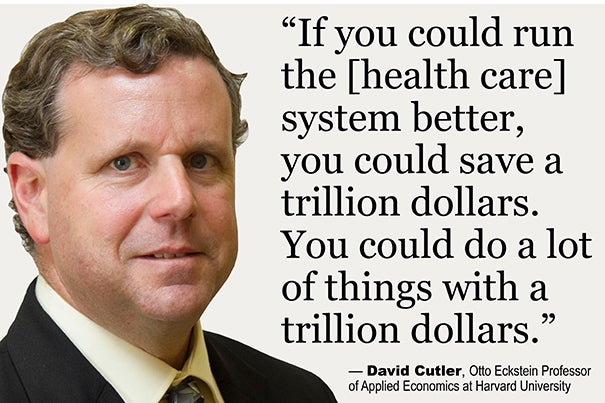 CUTLER: That’s correct. Sen. [Lamar] Alexander and Sen. [John] McCain said we should do it bipartisan. It’s not a hard issue. But Republicans were opposed because they didn’t want that to substitute for doing something bigger. Once you do that, we can then say, “OK, it’s time to tackle the two big issues.” One is what we were just talking about, which is how do you reduce how much it costs to care for people.

Basically, all of medical spending is on people who are very sick. Annual trips to the doctor cost very little. And well-baby visits cost little. What’s very expensive is having a debilitating illness, being at the end of life, having severe heart disease and cancer, mental health impairment. How do you reduce the cost when someone is very sick? That’s a really hard problem. It’s not that there are no answers, but we don’t have the full answers mapped out.

GAZETTE: Just to backtrack to the cost of medications for a moment. Why are rheumatoid arthritis drugs so expensive here and so much less in Canada?

CUTLER: There are price negotiations by other countries. The government of Canada just says we’re not going to pay more than X.

GAZETTE: Can the president make the system collapse? He keeps talking about it.

CUTLER: He can’t make it collapse but he can make it a lot worse. And the group of people he can make it worse for is, ironically, middle-income people. Low-income people are still subsidized; they only pay a share of their income. The premium might be $6,000 per family, and they might be paying $1,000. He could screw things up so the premium goes from $6,000 to $7,000 but they’re still only paying $1,000. The people who would be severely hurt are the people who are paying the $7,000 who are not being subsidized. He could really make life terrible for them. Why he would want to do that, I have no idea.

GAZETTE: Whatever the ultimate fate of Obamacare, has it changed the nature of the debate to how do we best cover as many people as possible? Before, it wasn’t necessarily guaranteed that people would be covered.

CUTLER: Before Obamacare, what was acceptable was that 15 percent were uninsured. Post-Obamacare, if you had all the states expand Medicaid and really pushed to get more people covered through the exchanges, by not discouraging them from signing up and not canceling the ads, you could get close to universal coverage for the intended population. So, one way to think about it is that we’re inching toward universal coverage.

Republicans promised people that they would keep that [as a goal], but the actual policy didn’t deliver. Neither the House nor the Senate would say openly, “No, we don’t think that’s the right goal.” Instead, they said, “That is what we want, and our plan will get us there better.” The problem was it didn’t.

GAZETTE: Are there particular milestones in the weeks ahead that will indicate which way this is going to go?

CUTLER: If Democrats and Republicans can agree on the easy fixes to the exchanges, that’s a very good sign. It may not even be the leadership that leads this. It may be that leadership gets dragged into it. But if they can come up with something bipartisan that says, “We’ll deal with the fact that some of the insurers don’t want to enter some of these areas. We’ll deal with the cost-sharing reduction payments that the president is threatening to withhold. And then we’ll move on to other, harder stuff” — if they could do that, I’d be pretty optimistic.