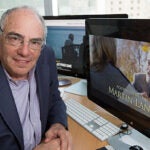 A contemplative visitor has recently arrived at Harvard. Her name is unknown but her presence is unmistakable. She is the subject of a vivid portrait by the French artist Jean-Honoré Fragonard.

Muted hues of browns, reds, and blues contribute to the wistful appeal of “Young Girl Reading,” installed in a second-floor gallery devoted to 18th-century neoclassicism and rococo at Harvard Art Museums. The sitter looks serene in her yellow velvet dress topped with a white ruffled collar. Her head bowed, she is immersed in the small book she holds in her right hand.

The image is one of Fragonard’s fantasy portraits, a series from the middle of his career in the late 1700s. The 15 works are similar in size, always of a single figure, sometimes a man, sometimes a woman. Often the subject is engaged in an activity that suggests a sort of “cultured leisure,” said Cassandra Albinson, Margaret S. Winthrop Curator of European Art.

“We think that they are images of people that actually sat for him and they are certainly in what we call a portrait format, so the focus is on the face and the upper part of the body,” said Albinson. “But there is also something imaginary and sort of fantastical about them.”

“Young Girl Reading” is just one of many masterworks that have been loaned to the Harvard Art Museums through the years, part of a series of exchanges that have enabled Harvard to share from its own rich collection and brought a range of famous works to campus.

Recently Winslow Homer’s canonical nocturne “Summer Night” was on view at the museums as part of an agreement with the Musée d’Orsay in Paris. In return, Harvard lent the Paris institution “Summer Scene,” a vivid oil landscape by the French Impressionist Jean Frédéric Bazille depicting a group of young men bathing on the banks of a sun-splashed river.

Many factors are considered before Harvard says yes to such a request. First, if a piece is too fragile, a loan is out of the question. Curators also carefully research the museum making the request to ensure its gallery conditions meet lighting and temperature requirements. Also considered is the impact of taking popular works off display.

“It’s one of the most serious duties that we have as curators, to make those decisions about loans and to work with colleagues and with our director to come up with a reasonable response,” said Albinson. 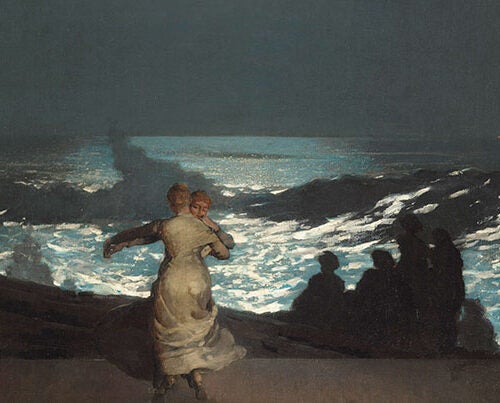 With borrowed seascape as backdrop, Harvard Art Museums director explores what made the artist so singular

For one, the trades connect visitors with masterworks they might otherwise never see in person, such as the famous Fragonard, on view through Sept. 11 and the subject of an Albinson gallery talk on Wednesday and a lecture on Saturday with two French art scholars.

The journey of “Young Girl Reading” to Cambridge began a couple of years ago with a curator at the National Gallery of Art in Washington, D.C., who was organizing a U.S. show of 18th-century French painting. She wanted to include Harvard’s famous 1750 portrait of the Marquise de Pompadour, the mistress of Louis XV, by French painter François Boucher.

“She asked to borrow one of our treasures, really one of our very, very best paintings,” said Edouard Kopp, the Maida and George Abrams Associate Curator of Drawings, who helped facilitate the request. Eager to fill the space that would be left by the loan, Kopp and colleagues considered works from the National Gallery that could match the Boucher in size and subject matter. “Young Woman Reading” fit both requirements.

“We had this idea of asking for this magnificent painting by Fragonard,” said Kopp, “and to our delight they said yes.”

The piece hangs near a number of Harvard-held paintings and drawings by the prolific French artist in a mini “thematic” installation inspired by the loan.

“As a draftsman and as a painter you could say Fragonard is a very virtuosic artist,” said Kopp. “He’s not interested in the exact minute depiction of small details, but rather he has a witty, vigorous approach to drawing.”