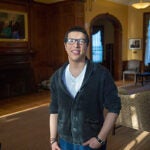 Hitting the books after hitting a wall

With borrowed seascape as backdrop, Harvard Art Museums director explores what made the artist so singular

Considered by many one of the best nocturnes in the American artistic canon, Winslow Homer’s “Summer Night,” painted in oil at Prouts Neck, Maine, in 1890, is on loan to the Harvard Art Museums from the Musée d’Orsay in Paris through July. The work, the topic of a discussion series at the museums, is also a favorite of the museums’ Elizabeth and John Moors Cabot Director Martha Tedeschi. A Homer scholar, Tedeschi said his brilliance was his ability to capture on the canvas “something that most of us couldn’t even put into words.” The Gazette spoke with Tedeschi recently about “Summer Night,” Harvard’s own Homer collection, and the artist’s intent.

GAZETTE: What first drew your interest to Winslow Homer?

TEDESCHI: When I was a curator of prints and drawings at the Art Institute of Chicago, I proposed a Homer exhibition and catalog based on our robust collection of watercolors that would show the Homer watercolors in the context in which they belonged. That meant curating a show in 2008 that incorporated a number of related works from other institutions.

In fact, I borrowed several works from the Harvard Art Museums, so some of the watercolors in our galleries here are old friends. The initial impetus for the project was simply that the watercolors were there at the institute, they were beautiful, they really hadn’t been written about properly, and I felt that that would be a great mission to take on.

GAZETTE: You have said that in studying Homer you came to understand what he was trying to do as an artist. In your mind, what were those artistic intentions?

TEDESCHI: What I came to appreciate most about Homer is his absolute dedication to replicating the feeling of a place or a scene. Not replicating a scene in a photographic realism kind of way, but replicating the aura or the character of a scene, whether that means evoking the way a breeze cools as it comes across the water as the sun sets, or whether it’s the humidity that’s coming off the lush vegetation in the jungle. With his work, he evokes so strongly the sensations of place that the viewer feels as if they are there, in it.

GAZETTE: What do you see when you look closely at “Summer Night”?

TEDESCHI: One of the things that I think is so successful in this picture, and that I love about Homer in general, is that it evokes things that he could not have possibly painted into the picture, like sound. There are two young women dancing on a porch. That immediately implies that there’s probably music playing. And in fact an early title of this picture was “Buffalo Gals” after the popular song. So with that title in mind, and looking at the women dancing, you could almost start humming that song to yourself and the lines “Buffalo gals won’t you come out tonight, and we’ll dance by the light of the moon.” There is also the silhouetted group of people to the right of the picture who appear mesmerized by the sound of the crashing waves and the light flickering across the surface of the water. Homer conjures the sound of relentless splashing and churning. You can feel the spray, you can feel that cool breeze coming across that moonlight sea.

And then there are his sources of light. The way the back of the dancer’s dress is lit implies a light coming from the house. And look at how bright those white highlights are on the water; that’s from a moon that you don’t see. And then there’s this little dot of red in the upper right corner of the painting from a lighthouse. The way he indicated that lighthouse with just a dot of color is so brilliant, but also so mysterious, and it attracts the eye to the horizon. It’s really not that difficult to imagine yourself being one of these people and feeling, seeing, and hearing this magical summer evening.

One of my favorite things about this painting is the messy area here in the middle of the canvas where he has painted the moonlight on the ocean. If you look closely, you can see he’s taken white paint and dragged it across the weave of the canvas. You can see the nubs of the canvas holding the white color. It actually looks kind of muddy up close, but if you step back several feet, all of a sudden the moon is shimmering on the surface of the water. To me that is the brilliance of Homer. He actually has kind of a rough touch, but he knows exactly what the effect is going to be. He is able to capture through these material means something that most of us couldn’t even put into words.

GAZETTE: Can you talk about Harvard Art Museums’ own impressive collection of Homer’s works?

TEDESCHI: Homer is so well represented here in all the media in which he worked, including the wood engravings for Harper’s Weekly Illustrated that were made from his drawings. That is how he started as an artist. He became famous as a Civil War correspondent documenting battles before he was known as a painter. Thanks to the range of his work here at Harvard, we can trace his career and actually point to the way he developed. His prowess as a watercolorist is completely related to the fact that he started as an illustrator. He used watercolor and black and white wash to make the drawings for Harper’s.

To be able to show an artist’s career, the roots from which he came, and the way a particular medium stayed with him throughout his life, is wonderful. We are really thinking seriously about doing a Homer at Harvard exhibition that will focus on the riches we have here by this revered and still enigmatic American artist.

Theodore E. Stebbins Jr., curator of American art emeritus, will give the final gallery talk about Homer’s “Summer Night” on Thursday at 12:30 p.m.

Visitors can request to see works by Winslow Homer in the museums’ collection via appointment in the Harvard Museums Art Study Center.