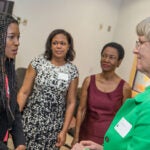 Last spring, Harvard President Drew Faust joined with Civil Rights icon and U.S. Rep. John Lewis to affix a plaque on Harvard’s Wadsworth House in honor of Titus, Venus, Bilhah, and Juba, who lived and worked there as enslaved persons during the presidencies of Benjamin Wadsworth and Edward Holyoke in the 1700s. “Today we take an important step in the effort to explore the complexities of our past and to restore this painful dimension of Harvard’s history to the understanding of our heritage,” said Faust during the unveiling. “The past never dies or disappears. It continues to shape us in ways we should not try to erase or ignore.”

This Friday, the University will take another step in exploring its long-ago ties to slavery with a major daylong symposium at the Radcliffe Institute for Advanced Study that will examine the relationship between slavery and universities.

Leading into the conference, the Gazette spoke with Faust about Harvard’s ongoing commitment to acknowledging and understanding the grimmer aspects of its past.

GAZETTE: Last year you, along with Congressman John Lewis, unveiled a plaque on Wadsworth House in honor of four enslaved persons who worked and lived there during the 18th century, and you urged in a Crimson editorial that the University more fully acknowledge and understand its links to slavery. Is the upcoming conference at Radcliffe a next step in that commitment?

FAUST: We started planning the conference at the same time we were talking about and planning for the plaque, recognizing that we knew something about the history of slavery at Harvard — the four individuals honored on the plaque are a bit of our knowledge — but we knew there was much more. And we also knew that it would be beneficial to have a way of understanding what our peer institutions have learned about slavery on their campuses and how they’ve responded to it. And so the whole genesis of the conference was to bring the attention of the community here at Harvard to this part of Harvard’s past, to explore it more fully, and to understand the ways other institutions have responded to the history of slavery in their environments. So it’s as much an effort to raise awareness as it is an effort to learn more.

GAZETTE: How does Harvard come to grips with its early involvement in slavery when it, as with other early American colleges, has so few records on those who were considered property and often not even noticed historically? How do we properly honor what we barely can document now?

FAUST: This is so much the essence of expanding understanding of the history of slavery, which coincides with my time as a historian. When I got my Ph.D. in 1975, we were in the midst of an explosion of inquiries into the history of slavery. And for many generations people said, “Oh, we can’t know anything about it.” Then historians just got much more imaginative about the kinds of sources they used and the ways they looked for the past. And it affected what we knew about enslaved people and the system of slavery, but also more generally. It was called at the time “the history of the inarticulate,” meaning we can’t just settle for the history of statesmen and generals and people who kept extensive records.

If we want to understand the past in its full form, we have to be more ingenious in order to be able to trace the lives of women, of workers, of people who were not literate — and of people who were forbidden literacy, Americans who were enslaved. And so this whole explosion of historical resources came out of that commitment to expand the compass of who was included in our history.

One of the things happening now is that archivists, who have never looked for these things, are finding them in odd places. Titus, one of the enslaved persons from Wadsworth House, didn’t leave extensive personal papers the way Charles William Eliot did, but if you dig around you can find property records, you can find baptismal records. For instance, we have found a lot about Native American history through archaeology here on campus, and similar kinds of archeological research have yielded a great deal of information about slave plantations in the South. So what are the means that we could employ to really look more assiduously for a record that is there? I know it will be there. It may not be as full as the written records of the presidents of Harvard, but we are going to find a lot and already have found a lot.

GAZETTE: You are a historian of the Civil War, which was fought to end slavery in America. Do you see this effort by Harvard as a logical extension of your career and concerns?

FAUST: I grew up in Virginia, and Southern history was a really rich area of historical practice when I entered the profession. It was around the time that the Civil Rights Movement had brought issues of race front and center in American life. Studying Southern history always meant trying to understand a burdensome past and a past that, for me, had messages about the kind of delusions and inhumanities we may be embracing in the present.

So how do we learn to interrogate ourselves and to understand the complexities of what humans of any era face and how they come to find a moral path, or not? That to me is a fundamental lesson of this history. And I think for much of my lifetime that had been confined to thinking about the American South. I would say that has needed to extend much more broadly to the history of the nation as a whole. And indeed the historiography, what scholarship has done in the last 20 years, is to emphasize much more the complicity of the North and the presence of, first, slavery itself, and then the influences of slavery.

GAZETTE: Like many institutions of its age, Harvard has a long and complicated history related to race and slavery. It made efforts to end discrimination against African-Americans earlier than many other universities, and a large number of its students died fighting in the Civil War. What part of the past did Harvard eventually get right, and how do you see the University projecting that into the future?

FAUST: I think there have been very important voices here. We’ve had some extraordinary scholars of slavery. John Hope Franklin did his Ph.D. work at Harvard, W.E.B. Du Bois was here, so we’ve had a wonderful tradition of people contributing to understanding this past and to communicating about it to the larger American community. I think we should be really proud of that. But we’ve also had challenges throughout our history as well, and looking at the complexity of it, I think, is an important part of understanding our history as we move forward.

I also think that part of feeling you belong in this community is feeling that its history is your history. So I see this as aligned with the Presidential Task Force on Inclusion and Belonging, which we launched earlier this year. To have a more inclusive history is part of having a more inclusive present.

GAZETTE: The Harvard University Archives is mounting an exhibit to coincide with the Radcliffe conference. I understand you reviewed the material and even suggested additions to the exhibition. Can you tell me what you suggested, and why you think this exhibition is so important?

FAUST: One of the things I suggested was the addition of materials and images related to Greenleaf, which now serves as the home for the dean of Radcliffe. When I was dean, I lived in Greenleaf for 6½ years. That house was built by a man named James Greenleaf who made his money in the cotton trade and spent half of every year in New Orleans and would bring his children and family — and as I understand it his cows — from Louisiana. The children wanted to have the same milk all year round, so presumably the cows grazed on that area that’s between the A.R.T. [American Repertory Theater] and Greenleaf. His wealth and his ability to build that house was made possible by his history as a merchant and by the labor of enslaved cotton workers.

That was a piece of Harvard’s heritage and an example of how slavery, which was illegal in New England, in Massachusetts after 1783, nevertheless was very much a presence in the economy in Massachusetts and New England. Slavery in that sense was nationwide even though the ownership of slaves after the end of the 1820s was restricted to the Southern states.

GAZETTE: What do you hope people will take away from the exhibition?

FAUST: Harvard is very conscious of and concerned about its history, and when I give speeches I am frequently referring to something Charles William Eliot said, or something talked about in 1636. We are very aware of the importance of our traditions, but we’ve only partially understood them. We need a fuller rendition of what the history of Harvard is, and it includes things that we are not proud of, but it also includes things that we are proud of.

We have to understand how those things fit together, the complexity of what builds an institution and how an institution evolves. One of the aspects of Harvard’s past with slavery includes debates over it: how people in this community both defended it and opposed it, how there were abolitionists as well as really active anti-abolitionists on our campus. How do we understand those things? And how can people like us reconcile that people we see as our forebears took positions that we today find unthinkable?

GAZETTE: Last year you mentioned the appointment of a committee of Harvard historians to advise you on how to carry forward further research on the history of slavery and Harvard. Can you give us an update on the status of that committee and Harvard’s plans moving forward for how to shed more light on this period?

FAUST: A number of the faculty have been advising and working on the conference happening later this week, so much of the early activity has been focused on that. But one thing I hope we will do is commemorate the history of slavery at Harvard in a very literal and physical sense, which that plaque represents. Slavery was a part of this institution and I would like to have other sites that were significant in that history that we memorialize. I’d like to draw attention to the fact that this history had a physical place on our campus.

Then we will see what else comes out of the discussions this week. I am also going to fund a researcher to continue some of the work that students in Sven Beckert’s seminar began in 2007, and that the researchers have undertaken recently in the treasure hunt in the archives, someone who will be charged with recreating the history, discovering the history of slavery at Harvard.

For more information about the Radcliffe conference, Universities and Slavery: Bound by History, visit its website. The conference, which has reached attendance capacity, will be webcast live, in its entirety, and videos will be available online after the conference.