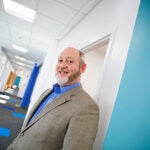 Aiming to confront present-day vestiges of long-ago slavery at the University, Harvard officials today celebrated some of the people whose lives and toil remained invisible for so long, dedicating a plaque to four colonial-era slaves.

“Today we take an important step in the effort to explore the complexities of our past and to restore this painful dimension of Harvard’s history to the understanding of our heritage,” said President Drew Faust during the ceremonial unveiling of a stone plaque at Wadsworth House before a distinguished audience of officials, faculty, and invited guests.

Affixed near Wadsworth Gate, the plaque memorializes Titus, Venus, Bilhah, and Juba, four slaves who lived and worked in Wadsworth House and were owned by Harvard presidents Benjamin Wadsworth and Edward Holyoke during the 1700s.

“The plaque is intended to remember and honor them and to remind us that slavery was not an abstraction, but a cruelty inflicted on particular humans. We name the names to remember those stolen lives,” said Faust, a Civil War historian. It is expected to be the first of many efforts to memorialize and chronicle the contributions that enslaved people made to the University.

Attending was U.S. Rep. John Lewis, the Georgia congressman and icon of the Civil Rights era, who called the gesture a new chapter for Harvard and an important step in having America come to terms with slavery.

“For nearly four centuries, we have believed that the best way to cleanse this nation of the stain of slavery is to ‘move on,’ ” said Lewis, who received an honorary Doctor of Laws degree from Harvard in 2012. Landmarks were torn down and records lost in an effort to “wipe out every trace of slavery from America’s memory, hoping that the legacy of a great moral wrong will be lost forever in a sea of forgetfulness. But for 400 years, the voices of a generation have been calling us to remember. We have been tossing and turning for centuries in a restless sleep, and we’ve pleaded with them to be still, but they will not be silent.”

Lewis led the long fight to get formal recognition for the African slaves who built many of the nation’s most important federal buildings, including the White House and the U.S. Capitol. He thanked Faust for her leadership and tenacity in the push to give “these souls some of the dignity and the honor that they did not receive in life, [but] they have deserved for centuries.”

From its earliest days, Harvard was “directly complicit” in the slave trade until Massachusetts abolished the practice in 1783, Faust noted. But even then, she said, the University maintained ties to slavery, and benefited financially from it, up until the Civil War, a possible reference to properties that were bequeathed to Harvard in the early 1800s by slave owner Isaac Royall Jr., whose family wealth came from their West Indian plantations. Proceeds from the sale of that land provided the seed money first for Harvard’s Royall Professorship of Law and then for Harvard Law School’s (HLS) founding in 1817, which recently has been a point of concern in HLS protests.

While Harvard is proud of its long and distinguished history in education and public service, and of the many exceptional people associated with the University, it is essential that it also face uncomfortable truths in our “search for veritas,” said William F. Lee ’72, senior fellow of the Harvard Corporation.

“It is easy enough to highlight and to celebrate the things that have occurred in the past that fill us with pride,” said Lee. “It is harder to shine a light on those aspects of our past that deeply disturb us, that confuse us, that confound us, and that we might prefer to leave in the shadows.”