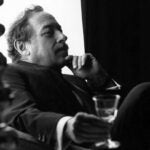 On stage: Nights of ‘the Iguana’

Spanish course for Latinos explores culture and identity, along with grammar

Enrique Casas ’19, a child of Mexican immigrants who grew up on Chicago’s South Side, spoke Spanish at home but never took a grammar class or read a book or wrote a paper in the language.

Until he came to Cambridge.

Intrigued by the description of a course called “Spanish 49h, for Students of Latino Heritage,” which teaches colloquially fluent students the basis of formal and academic Spanish, Casas signed up. He learned more than grammar rules.

“My Spanish was pretty good,” said Casas, a computer science concentrator who during the first 15 years of his life spent every summer in Mexico visiting relatives. “I learned about accents and punctuation, but what I enjoyed the most was discussing issues of identity affecting Latinos.”

Throughout the course, students learn to accept the challenges of growing up in two cultures and speaking two languages, said María Luisa Parra, senior preceptor in Romance languages and literatures, who has taught the course since 2013.

“In the beginning, they’re very insecure about their abilities to speak Spanish,” said Parra. “But as we study the history of Latinos in this country and the evolution of Spanish, they end up with a richer appreciation of the language and a better understanding of themselves.”

Offered by the Department of Romance Languages and Literatures, the course draws mainly children of Latino immigrants who learn to speak Spanish at home, and while their goal is to gain a more formal grasp of the language, they generally yearn to explore their roots and find answers to the question of belonging.

“Second-generation Latinos feel we’re neither from here nor from there,” said Casas. “If I’m in Mexico, my Spanish is not good enough for them, and they see me as an American. In the United States, if people see me walking down the streets, they don’t say, ‘There goes the American.’ They say, ‘There goes the Mexican.’”

The course reviews the history of Spanish in what is now the United States, going back to the 1600s when the Spaniards controlled the territory from Florida to California.

For Hiram Rios Hernandez, M.P.P. ’17, who was born in Puerto Rico and grew up in Florida, the class helped him connect with students whose families hail from Cuba, Guatemala, Argentina, Colombia, and El Salvador, and to understand what it means to be Latino. “We’re united by a common language, culture, and history,” he said. “We’re part of the Latino experience in the United States, and we’re here to stay.” 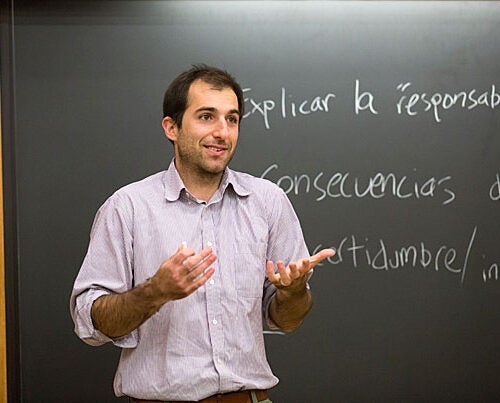 It also introduces students to Spanish literature and Latino popular culture. The students listened to songs by popular Latino singers, read Sandra Cisneros’ “La Casa en Mango Street,” and watched films such as “Frida,” about the Mexican painter Frida Kahlo, and “Selena,” about the Tejano singer who was killed at age 23 by the president of her fan club.

To help advance their writing skills, students are asked to write formal letters of introduction, book and movie reviews, and academic essays. For an in-class exercise, Parra had students write calaveras literarias, short humorous obituaries that are recited as part of the celebrations of the Day of the Dead in Mexico.

The course even widened students’ employment opportunities. Such was the case with Dorothy Villarreal ’15, who was offered a job in Mexico. “The course gave me skills to write papers and perform in a professional and academic setting that I wouldn’t have had otherwise,” said Villarreal, who works at the Phillips Brooks House Center for Public Service and Engaged Leadership.

Jocelyn Vazquez ’19, who is pursuing a joint concentration in government and Romance languages, also found the course beneficial. Vasquez grew up in San Antonio, Texas, where her parents settled after emigrating from Mexico.

“It’s a cool way to connect with my roots because roots don’t die out,” she said. “It has definitely refined my language skills, it has advanced my education and my understanding of the history of Latinos in the United States, and it has also made my parents very happy.”

That’s also true for Casas, who now watches Latino soap operas with his non-Hispanic girlfriend, who is interested in learning more about the culture. He relished that the course offered a place for students to discuss the issues that mark second-generation Latino immigrants.

“At times, the class felt like a support group,” said Casas with a chuckle. “In the beginning, we focused on grammar, but we ended talking a lot about identity.”

As for where he belongs, he now knows. The United States is his casa.