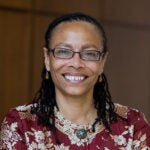 The shifting landscape in biosocial science

In August, the luxury liner Crystal Serenity took 1,500 passengers and crew on what was once a perilous and often impossible voyage: through the famed Northwest Passage.

The liner’s 28-day trip from Vancouver, British Columbia, to New York over the top of the world via the historically ice-choked maze of Arctic islands north of Canada succeeded where numerous expeditions over hundreds of years failed, turned back by cold and ice or enticed by open water only to become icebound and face slow death by starvation and freezing.

Though explorers in the mid-1800s proved the sea route from the Atlantic to the Pacific existed, the climate was so extreme it was rarely used until recently. Record ice melt in the far north has made the passage — thousands of miles shorter than alternate routes — increasingly navigable.

Rebecca Woodgate, associate professor of oceanography at the University of Washington, said the warming has reduced not just the extent of the ice, but also its thickness. Though ice grows and shrinks naturally with the seasons, ice overall is melting at a rate of about 13 percent a decade, she said. Further, when thickness and extent of the ice are both considered, the Arctic has probably already lost 70 percent of its summer sea ice, including half of its long-term summer ice, she said. 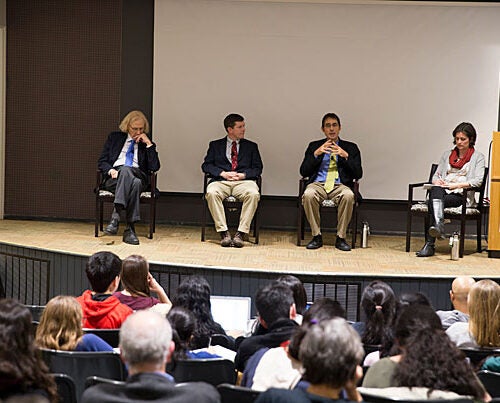 “We no longer get the strong, thick ice we used to have,” Woodgate said.

Woodgate, who has been investigating climate change’s impact on the Arctic, tracked much of the heat entering the area to ocean currents carrying warming water from the Atlantic and the Pacific. The melting Arctic ice creates a positive feedback, where more dark, heat-absorbing water is exposed, which traps more heat, melting more ice, and exposing even more water.

The loss of albedo, or the reflectivity of snow and ice, is the reason the Arctic is warming so much more quickly than the rest of the globe, she said. What the impact of a warmer Arctic will be on climate further south is something scientists don’t yet know, she said.

Woodgate’s snapshot of Arctic sea ice loss was part of a daylong look at the oceans and how they are being affected by climate change. The event, “From Sea to Changing Sea,” was sponsored by the Radcliffe Institute for Advanced Study and organized by John Huth, the Donner Professor of Science and co-director of Radcliffe’s Science Program. Friday’s event featured panel discussions on the oceans’ role in the rise of life on Earth, the changes the seas are currently undergoing, and how they may continue to change.

The oceans, participants said, affect life on Earth far more than most people realize. Not only were oceans the original cradle of life, oceanic life altered the Earth’s atmosphere, enriching it with the oxygen that we breathe. Oceans provide food and drive the global water cycle. They absorb a significant proportion of the carbon emitted by burning fossil fuel, mitigating some global warming.

The seas are also rising, which demands attention from coastal communities like those in the Boston area.

“Our doorsteps are the very ones that are going to flood,” said Radcliffe Dean Lizabeth Cohen, the Howard Mumford Jones Professor of American Studies. “It is hard to imagine a more urgent subject than the oceans.”

The oceans cover most of the planet, and people tend to think of them as one of the Earth’s extreme environments. Professor of Organismic and Evolutionary Biology Peter Girguis, who studies deep ocean life, said that, by volume, those habitats far outstrip those of the more familiar sunlit world.

“Eighty-five percent of the Earth’s biosphere is deep ocean, perpetually dark and perpetually cold,” Girguis said. “We think of it as extreme environment, but arguably we are.”

Much of the session focused on the changes being wrought as the planet warms. Maureen Raymo, a professor at Columbia University and its Lamont-Doherty Earth Observatory, said that studies of sea level rise during past warm periods indicate that a 4-foot rise by the end of the century is a reasonable estimate. That would affect millions of people as well as valuable infrastructure such as ports, energy facilities, and naval bases.

“There’s a huge amount of real estate within this zone of risk,” Raymo said. “People have this vague idea that they’ll be able to deal with it, keep it back. I don’t think that’s realistic, based on what I know.”

The city of Boston is investigating what might be coming. Ellen Douglas of the School for the Environment at the University of Massachusetts, Boston, described efforts to study potential impacts and prepare for future flooding.

Those studies show that parts of the Big Dig highway project’s network of tunnels in and around the city are already vulnerable to flooding. Computer modeling shows a low probability of significant widespread flooding today, but two to five times as much by 2030 and more by 2070. By then, Douglas said, combined high tide and storm surge could flood Somerville, South Boston, and Boston’s South End, and push water over the Charles River dam, threatening upriver communities as well.

The good news, Douglas said, is that there is time to address the problem. The model identified the low spots through which water would flood inland. Blocking those vulnerable locations would help to safeguard them.

The effects of climate change will be with us for the long haul, the participants said. Natural processes remove carbon dioxide from the atmosphere slowly, meaning that even if carbon dioxide emissions were halted tomorrow, additional warming and sea level rise are already assured.

“What everybody is in agreement on,” Raymo said, “is that sea level is rising and the rate is accelerating.”