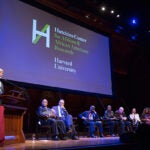 Comedian sets meeting with Bill Simmons to give program a boost

Now in its 14th year, Harvard’s Scholars at Risk program continues to offer sanctuary to teachers, researchers, writers, and other intellectuals from around the globe. Late-night TV host and comedian Jimmy Kimmel will join sports analyst, podcaster, and Massachusetts native Bill Simmons for an evening of conversation at 7 p.m. Saturday at Boston’s Citi Shubert Theater to support the program. The Gazette caught up with Kimmel last week to ask him about his connection to Scholars at Risk, his work, and whether he thinks frenemy Matt Damon might drop in on the upcoming discussion.

GAZETTE: How did you first learn about the Scholars at Risk Program at Harvard?

KIMMEL: The program is directed by Jane Unrue, who has been my close friend since we were in high school in Las Vegas. Jane teaches writing at Harvard and asked me to help an Iranian novelist named Shahriar Mandanipour. I sponsored Shahriar to help him and his family to escape government persecution. Scholars at Risk gives refuge to scholars, artists, and writers whose lives and freedom are at risk in a very real way.

GAZETTE: Why have you taken the time to support the program?

KIMMEL: It’s easy to understand why it makes sense to donate to children’s charities and medical research and hunger relief and that sort of thing. This is a bit more difficult to absorb. When there are men and women who are willing to risk the lives of their children and parents to tell the truth and share their talents, we have a responsibility to help them. We are very lucky to live in this country. Supporting those who demand the same freedoms we have is an exceptionally American thing to do.

GAZETTE: How does that resonate with you as a comedian, whose world is based on pushing the envelope and freedom of expression?

KIMMEL: For me, it puts everything in perspective. I have had long, heated, and vehement arguments with censors at most every radio station and TV network that has ever employed me over curse words and cartoon penises. After learning about the real horrors these authors, poets, and journalists from places like Iran and Russia and China experience and how brave they are for standing up to their leaders, I am embarrassed that I have ever been ignorant enough to feel oppressed.

GAZETTE: You are going to have a conversation with Bill Simmons. Can you give us a little preview of the discussion?

KIMMEL: I’ve been a fan of Bill’s work since around 2002, when he was “The Boston Sports Guy” writing for ESPN.com. When ABC offered me a talk show, I flew Bill and his wife, Kari, to LA to convince him to write for me. He was with me from before we launched the show and stayed for a couple of years until ESPN lured him back. That was a crazy time for both of us. We’ve been through a lot together. I am proud of him and how far he’s come.

GAZETTE: Is there any chance Matt Damon, a famous Harvard student, might make a guest appearance?

KIMMEL: You know Matt Damon didn’t really go to Harvard, right? Has anyone ever actually fact-checked that? He scored 860 on his SAT. Also, his middle name is Paige. I feel like we need to get that out there. If he does show up, he will be arrested.

GAZETTE: Have you been to Harvard before? If so, what was that like?

KIMMEL: I have. I visited Jane at Harvard a couple of years ago and she gave us a full tour. It’s a beautiful campus. My IQ went up two points just walking around there.