Matt Damon, on his craft 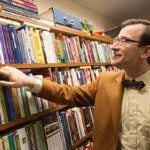 The lecture hall and performance space was jammed with members of the Harvard community who turned out to hear Damon and watch as Harvard President Drew Faust gave him the Harvard Arts Medal.

In her remarks, Faust praised Damon for both his acting ability and his humanitarian efforts. “He is, as director Gus Van Sant recently put it, ‘a local kid risen to become a global star, an everyman who is also exceptional, a person we all relate to, even as we aspire to emulate him.’ ”

Damon grew up in Cambridge and spent three years at Harvard before the lure of Hollywood pulled him away. But the former Lowell House resident and Cambridge native, who was active in Harvard’s theater scene during his student days, put his Harvard experience to good use along the way.

Damon made a surprising confession to an overwhelmingly Crimson crowd, admitting that he once had his heart set on attending Columbia University. But when he found out he had gotten into Harvard, Damon said, he suddenly saw the campus “in a new way.”

“I am really proud to come from here,” said Damon, who described his ongoing ties to the area and to Harvard, and his sense of loss at the Boston Marathon bombings. Damon told the young crowd that he has tried to honor and live up to his Harvard roots and the University’s broad mission throughout his life, and he urged his listeners to do the same.

“Hold onto that, and that feeling of what we are really about here,” Damon said.

He won an Oscar for best original screenplay at the age of 26 for his collaboration on the film “Good Will Hunting” with Ben Affleck, his high school friend and fellow actor, and became one of Hollywood’s most sought-after leading men. Among his many films are the spy blockbusters “The Bourne Identity,” “The Bourne Supremacy,” and “The Bourne Ultimatum,” Martin Scorsese’s crime saga “The Departed,” and Stephen Gaghan’s geopolitical thriller “Syriana.” Damon’s latest film is the Liberace biopic “Behind the Candelabra.”

During the discussion, Damon told Lithgow that he had the acting bug from his youngest days, when he dressed up in a fireman’s uniform and used a fake hose that “wasn’t attached to anything” to battle a blaze in his fireplace that was getting slightly out of control. It’s a good story, Damon said, “about how useful actors are in emergencies.”

By the time he reached high school, Damon knew he wanted to be an actor. He had an encouraging acting teacher at Cambridge Rindge & Latin and participated in a school program that allowed him to see shows at Harvard’s American Repertory Theater (A.R.T.) — and to meet and talk with the actors and directors. When he attended Harvard, he connected with then-A.R.T. director David Wheeler, who “really picked up the baton at Harvard.”

“He was an institution here,” said Damon, who, while in college, started auditioning for movie roles and being cast in small parts. His fortune turned thanks in part to good advice from a Harvard playwriting professor, who read a movie script that Damon had turned in as part of an assignment and said: “Don’t give up on this.” Damon left Harvard in spring of 1993 — headed for Hollywood and a role in “Geronimo: An American Legend,” with that script tucked under his arm. The film was forgettable, but in California Damon connected with Affleck, and together they completed the screenplay that became “Good Will Hunting.”

Asked by an audience member for his advice to aspiring actors and directors, Damon said that film schools and the working world are both good options, but that “school can give you those hours that in the real world you might not get.”

Like most people, Damon said he struggles with failure, admitting that he suffers when a project he has put his heart into doesn’t strike a chord with either audiences or critics. But he tries to understand how “something didn’t work here.” He also turns to his wife for support, he said, and for her total honesty.

Another audience member asked why the arts are important. Damon referenced his work on a current movie project about a group of soldiers tasked with saving works of art in Europe during the Nazis’ reign. Art, said Damon, “is a celebration of our common humanity.”

The conversation also touched on issues concerning family, acting, and Damon’s philanthropic work. He founded the nonprofit group water.org, which helps to provide access to safe drinking water and sanitation in Africa, South Asia, and Central America. With his work, he said, he hopes to be able to “engage people and help them understand what’s going on???? as a way to solve problems.

“As we launch our annual celebration of the arts at Harvard,” said Faust, “as we feel inspired by the people of Boston and the power of the arts to heal and renew us, we are especially grateful for the wonder of our ongoing dialogue with Matt Damon, on and off the screen.”

With Arts First under way, what promises to be a memorable and mischievous performance of the first movement of Ludwig van Beethoven’s Fifth Symphony with conductor and Harvard Professor Gregory Mankiw will open the festival’s performance fair on Saturday afternoon.

According to a press release from Harvard’s Office for the Arts, Mankiw, in addition to being a renowned economist, is “regarded in some circles as one of the foremost interpreters of Beethoven.” In the run-up to the event, Harvard luminaries have been praising the New Keynesian specialist’s talent with the baton in a series of sidesplitting YouTube videos.

Mankiw, the Robert M. Beren Professor of Economics, will conduct the undergraduate Charles River Ensemble at noon at Harvard’s newly revamped Science Center plaza. Attendees should keep an eye out for a special appearance by Lithgow — watch for a limousine — and for some high jinks by Harvard’s Hasty Pudding Theatricals.

On Wednesday afternoon, Mankiw rehearsed with the music ensemble and members of the famously raucous and racy theater troupe at Lowell Lecture Hall. While conducting the group, the slightly stiff-armed but surprisingly nimble economist ducked the embrace of an amorous “woman,” dodged a cartwheeling dinosaur, and ended up in a Rockettes-like dance number.

“I thought it might be fun, even if a bit embarrassing,” said the chair of Harvard’s economics department of his decision to take a turn at the conductor’s podium. “As a consumer of the arts, I am happy to lend my support to the producers.”

Asked directly about his actual expertise, Mankiw came clean. “I am one of the least musical members of the faculty; that’s why it’s going to be so funny.”

Other highlights from the three-day event will include the first collaboration among Arts First, Harvard Medical School (HMS), and the Harvard School of Dental Medicine (HSDM).

As a classically trained pianist, HMS student Christopher Lim ’10 was an active member of Arts First during his Harvard College days. When a member of the newly formed Committee on the Arts and Humanities at HMS approached him about organizing a group of Harvard medical and dental students to participate in the festival, Lim didn’t hesitate.

“Being on a separate campus, it’s very easy to forget there is a whole University dedicated to the pursuit and study of so many other things,” said Lim, who helped coordinate two nights of music performances, film screenings, dance, and visual art presentations (one on Thursday evening at the Longfellow campus and the other in Cambridge on Saturday afternoon) for this year’s Arts First.

“It’s a way to really bring together both campuses, not only bringing Arts First to the HMS campus, but also bridging the gap between the campuses and really integrating our participation in Arts First.”

In an effort to help the victims of last week’s marathon attack, leaders of the Dudley House Orchestra, in collaboration with the Dudley House Choir, will donate proceeds of their Sunday afternoon concert in Sanders Theatre to the One Fund Boston, the campaign created by Boston Mayor Thomas M. Menino and Governor Deval Patrick to help those directly affected by the Boston bombings. (In an email sent to the Harvard community last week, Harvard’s President’s Office also encouraged people to donate to the fund.)

Like so many people who were stuck at home in the Boston area during last Friday’s regional lockdown, the director of the Dudley orchestra was monitoring events as they unfolded and feeling restless. Then he started thinking about ways to give back.

“Now is when people want to help and make donations, and I just thought it would be a good idea to turn this concert into an opportunity to do that,” said Aaron Kuan ’09, adding that the theme of universal brotherhood in Beethoven’s Ninth delivers an uplifting message at such a difficult time.

“There is really nothing better to help people reflect and begin to heal than having a concert, where the music is there to help focus your thoughts.”

Other festival highlights will include a retrospective of student film and video productions presented by the Department of Visual and Environmental Studies in honor of the Carpenter Center’s 50th anniversary, a Saturday afternoon dance fest at the Science Center plaza featuring Harvard’s 27 student dance groups, and the

Harvard Playwrights Festival in Farkas Hall, three evenings of staged readings of plays created by students as part of an advanced playwriting class.