The director and the whistle-blower 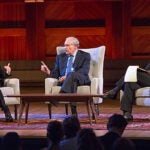 A prize of a weekend

At Kennedy School, filmmaker Oliver Stone explains how he came to make a movie about fugitive cyber leaker Edward Snowden

Even when he’s the subject matter, Oliver Stone directs. Meeting with reporters in the guest speaker’s “green room” before his appearance Monday night at the Harvard Kennedy School, the filmmaker at first asked that the temperature in the room be lowered. He next instructed photographers how he wished to be photographed. (“Why do you take the side so much?” he quipped.)

Soon after, in front of a packed audience of more than 700 undergraduate and graduate students, Stone yelled out for someone to raise the volume when a clip was played of his new movie, “Snowden,” about National Security Agency whistleblower Edward Snowden. The stage lights, the Oscar-winning director also complained, were way too bright. “I feel like I’m under interrogation here,” he joked.

In a way, since taking on the controversial Snowden as a film project, he has been.

In seemingly every interview he grants, Stone is asked what it was like to meet Snowden, a fugitive living secretly in Moscow who is wanted by the U.S. Justice Department on charges that he violated the Espionage Act and damaged his country’s security.

The other question Stone is pressed to answer: Is his movie a true depiction of Snowden’s case, or merely his personal view of a man who is portrayed largely as a hero for releasing top-secret files in 2013 that showed, among other shocking revelations, that the government gathers the phone calls and emails of hundreds of millions of people.

Stone, who turns 70 this week, is of course well-accustomed to being a lightning rod for debate. He has made a career out of taking on the toughest of subject matter, from the Vietnam War to the assassination of President John Kennedy to the travails of President Richard Nixon, generally presenting an anti-establishment view of American history.

‘When you take somebody’s life, you are responsible to tell that story, and I think we told it as quickly as we could, as dramatically as we could.’ — Oliver Stone

With “Snowden,” which opens nationally on Friday, with actor Joseph Gordon-Levitt in the leading role, Stone is adamant that he did not set out to prove the 33-year-old whistle-blower’s innocence. He said he had no intention of making a movie about him, in fact, until Snowden’s attorney in Russia reached out to him through channels, eventually inviting him to Moscow to meet clandestinely with Snowden.

“I went out of curiosity. Who’s going to say no to a man like that?” Stone told his audience.

The man he found, he continued, was intelligent, articulate, and above all a passionate believer in the Constitution, which Snowden believed the government violated. (In 2015, a federal appeals court ruled that the phone surveillance program Snowden brought to light was illegal.)

“I was very impressed by him. He’s not a guy to hang out with in a bar. He’s very serious. He lives on his computer,” Stone said. “He’s the opposite of the celebrity type, the attention-seeker.”

With such a protagonist, some film critics already have called “Snowden” too methodical, even dull, lacking the flash of Stone’s most engaging films. (Others, meanwhile, love the movie.) Stone said he doesn’t read reviews until a movie’s run is “way over.” But he said it was a huge challenge to portray Snowden’s largely cyber world (the details of which Stone himself found “mindlessly boring,” he said) in a way that would grip audiences.

“When you take somebody’s life, you are responsible to tell that story, and I think we told it as quickly as we could, as dramatically as we could,” he told reporters before his talk.

Clips of the movie, shown at various times during Stone’s talk, were indeed engaging, and well-received by students who filled the John F. Kennedy Jr. Forum, a theater space at the Kennedy School’s Institute of Politics where Stone said he last spoke in 1992 after the release of his movie “JFK.” Many in the audience flocked afterward to the Harvard Film Archive, which co-sponsored Stone’s talk and featured a special showing of “Snowden” last night. 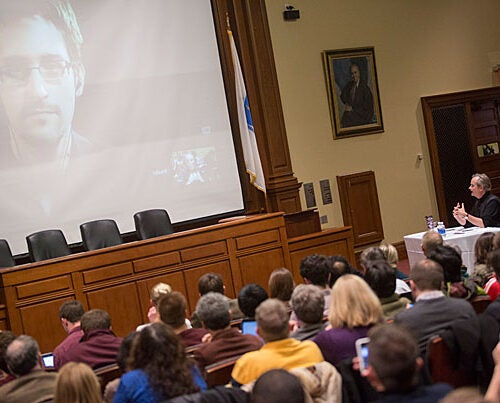 Stone’s talk was moderated by Ron Suskind, a Harvard Law School lecturer and Pulitzer Prize-winning journalist who directs the Law School’s Investigative Journalism Project. Suskind and Stone have known each other for years and had a comfortable rapport, though Suskind challenged Stone at times with tough questions, pushing the director on whether his own liberal biases entered into “Snowden.”

To that, Stone replied that he and co-writer Kieran Fitzgerald did as much research as they could, reviewing journalistic accounts and released documents, as well as interviewing Laura Poitras, whose documentary on Snowden, “Citizenfour,” won the 2015 Oscar, and Snowden’s girlfriend, Lindsay Mills, who joined him to live in Moscow and, Stone said, is more important to his tale than anyone realizes.

“I made nine visits to Moscow to try to get his side of the story. There’s only so far you can go before you gotta say enough,” Stone said, his hands in the air. “When you strip all the research out, you gotta make a movie that works because people want to see what happens next. I would never consciously distort the truth for that goal. Never. I never felt that I have.”

Snowden himself, interviewed recently by The Financial Times of London, said the movie’s story is as “as close to real as you can get in a film.” Stone, who showed reporters the quote on his cellphone, clearly takes heart in that.

“I hope there are more whistle-blowers,” he said. “We need them desperately in our society.”