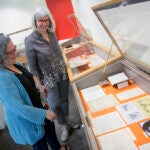 A family of common zeal

Recognizing the complexity inherent in marking the 500th anniversary of the Venice ghetto, organizers created some history of their own by staging the first production of Shakespeare’s “The Merchant of Venice” on the city’s landmark palazzo and holding a mock trial involving U.S. Supreme Court Associate Justice Ruth Bader Ginsburg.

“You don’t celebrate the creation of the ghetto, but it’s not like marking the anniversary of Treblinka or Auschwitz,” said Stephen Greenblatt, John Cogan University Professor of the Humanities at Harvard, who participated in the mock trial and who taught Shakespeare in the joint Harvard/Ca’ Foscari University of Venice Summer School.

Marking the creation of one of the world’s earliest ghettos in 1516, when the ruling Venetian council ordered the Jewish population to move to a small island marked by an iron foundry (gheto in Venetian dialect), has been a complex task for the small community of 500 Jews still living there. Shaul Bassi, associate professor at Ca’ Foscari University and director of Beit Venezia, said some people view any recognition as improper, while others believe there are lessons to be learned and shared.

“We are not documenting 500 years of history. We are making a statement of how this is a lived cultural space, a lived religious space,” said Bassi, who saw the staging of “The Merchant of Venice” as particularly critical to the discussion. “The ghetto was a very cosmopolitan place.”

Jews back then were allowed to work in the larger city during the day, but had to return to the gated, policed ghetto at night.

‘We are not documenting 500 years of history. We are making a statement of how this is a lived cultural space, a lived religious space.’ — Shaul Bassi

“It was an uncomfortable arrangement, an expression of extreme ambivalence, but it probably offered some protection to those who were shut in it,” said Greenblatt. “And what happened, not unlike what happened in the Harlem Renaissance, was that the community confined in the ghetto created a vibrant artistic and intellectual culture.”

Organizers said the play was the ideal vehicle through which to celebrate that rich history, given that 2016 also marks the 400th anniversary of Shakespeare’s death. Performers from Compagnia de’ Colombari, an Italian-born, New York-based theater collective, staged the play nightly in the ghetto through Aug. 1. Five actors took the stage each night to play different aspects of Shylock.

“Even though he never existed in real life, Shylock is by far the most famous inhabitant of the ghetto. To ignore ‘The Merchant of Venice’ would be — in a curious way — to suppress the single thing most people associate with Venetian Jewry,” said Greenblatt. “It’s a complicated play because Shakespeare is a complicated playwright. It’s not a human rights document. It’s not a sentimental account of warm relations among different groups, but it is an incredibly interesting exploration of the roots of xenophobia.”

Bassi said the director’s decision to split the role of Shylock was “audacious and bold and maybe even unsettling.” 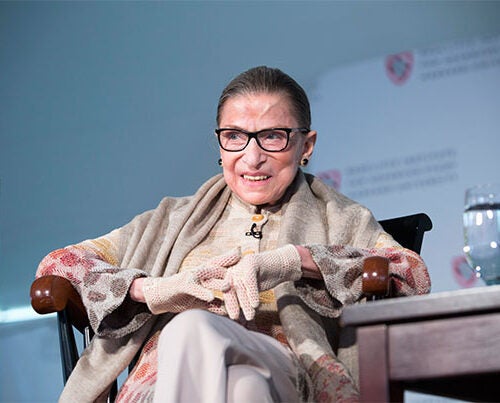 “We didn’t want to have a sublime ‘Merchant of Venice.’ It has to be disturbing,” he said. “Shylock is not a real historical figure person, but there’s a bit of Shylock in anyone.”

The idea of appealing the guilty verdict set forth in the play got some high-profile support with Ginsburg’s willingness to participate. She played the role of chief justice along with John R. Phillips, U.S. ambassador to Italy, Richard Schneider, professor at Wake Forest University School of Law, and two Italian jurists. Greenblatt and James Shapiro, an English professor at Columbia University, had what the Harvard scholar described as a “small spear-carrying role,” leading a discussion of the play during the 20-minute deliberation.

“Above all, it was thrilling to watch the way that Justice Ginsburg brilliantly probed the case, repeatedly interrupting the claims and counterclaims with remarkably penetrating questions,” said Greenblatt.

The mock decision was unanimous. The jurists threw out the claim for the pound of flesh Shylock had demanded from Antonio, and instead awarded the moneylender the return of his property, money, and religious freedom.

Bassi hoped both events — along with symposia held earlier this year — help elevate cultural vibrancy in the small neighborhood, which can be walked end to end in minutes. The larger goal is cultural restoration of the museum that remains alongside the neighborhood’s five synagogues.

“We need a modern-generation museum where you can admire the collections, and we need a cultural center. That’s the key to the center of this place. The attention and affection for this place has been so strong that we hope this will showcase what we have,” he said.