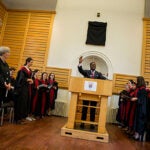 Faith in the counsel of history

“I’m not a boy, but I’m going to be one,” Chris Edwards defiantly told his grandmother at age 5, when she asked “the girls,” including Chris, to come to dinner. “I’m not a girl,” Edwards told her. “Yes, you are,” his grandmother said. “No, I’m not. I’m a boy,” was his response.

The next year, when he learned that his cousin Adam had a penis and he did not, Edwards thought he would eventually grow one. When that didn’t happen, he said, “I realized something was terribly, terribly wrong. When puberty hit, I knew that my body had betrayed me in the worst possible way that I could ever imagine.

“I knew then that I was stuck being a girl for the rest of my life, and I became deeply, deeply depressed.”

And so began Edwards’ journey from female to male, a journey that has included as many as 22 surgeries over five years. Edwards shared his story on Aug. 25 with a packed room at Harvard Hillel for the Faculty of Arts and Sciences’ summer Diversity Dialogue, “Transgender Inclusion in the Workplace.”

In junior high school, Edwards said, “I knew I was attracted to girls, so I thought I must be gay, a very common mistake. A lot of people think that transgender is an extreme form of being gay.” Gender identity and sexual orientation are two completely separate and unrelated things, he said. This was the early ’80s, he went on, and thinking he was gay was traumatic. 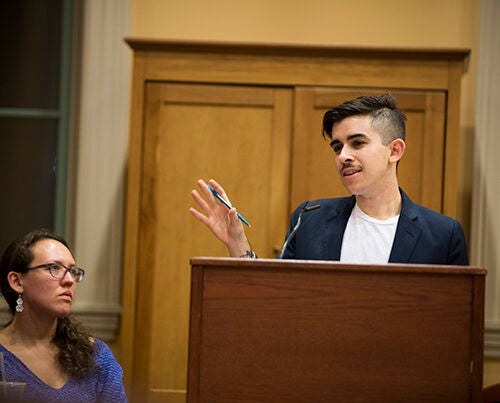 Inside the struggle to protect transgender inmates from abuse

Later, Edwards decided he would go to college — Colgate University — and after graduation he would kill himself. “The suicide attempt rate for transgender kids is 51 percent,” Edwards said.

Graduation came and went, he said, but he could not follow through with killing himself. Fortunately, Edwards, author of a soon-to-be-released memoir, “Balls: It Takes Some to Get Some,” said he found the right therapist. “She helped me realize that I would need a lot of support to get through this,” Edwards said, and convinced him to transition openly to family, friends, and co-workers.

Using the skills he learned as an executive at Arnold Worldwide, a Boston-based advertising firm, Edwards decided he would rebrand himself. He said he decided to go from the top down, starting with the Arnold executive board, talking candidly about his transition and responding to any questions asked. He then recruited “brand evangelists” — friends and colleagues who would spread the word to others in the agency.

Edwards said his co-workers were overwhelmingly supportive. “Most of them told me how brave I was,” he said. “One gave me a bar mitzvah card that said ‘Today You Are a Man.’” The visible change was gradual. He cut his hair shorter and shorter, and eventually grew a beard. After about two years, he said, one employee told him he did not remember what he looked like before.

Edwards said, “Gender identity is defined by what’s inside your brain. I do not let my transition define me. I am not my parents’ transgender child Chris; I am just their son.

“I am not transgender anymore,” he said, “I check male.”

Joining Edwards for the discussion was Jackie Glenn, vice president/global chief diversity officer for EMC Corp. Her focus was “Transgender in the Workplace: Practical Implications and Advice.” Glenn offered a workplace guide for managers and others to better understand people who are going through a transition.

“Sex,” she said, “usually refers to biological and anatomical characteristics, while gender refers to a psychological sense of self and the cultural norms expected of a binary model. Sex and gender are aligned for 95 percent of the population, but not for everyone.” Her “Gender Transition 101” guide offers, among other things, that “transgender is an ‘umbrella’ term for people who express any form of nonbinary gender identity or expression.”

Using EMC Corp. as an example of why it is important to work closely and supportively with people going through a transition, Glenn said, “employees who can bring their whole, authentic selves to the workplace and who are included as members of the community make [the workplace] a place where everyone wants to be. This leads to more productive teams who can all make an impact to the bottom line. Employees are then all fully engaged and happy to be [in the workplace].

“Some are open about their gender identity and expression, while others are not,” she noted. “For some people the process of understanding, accepting, and expressing that they are transgender is a challenging journey.”

“Hearing Chris tell his story of transition, authenticity, and the process of rebranding himself was inspiring and engaging,” said Benjamin Janey, production services coordinator at the Memorial Hall/Lowell Hall complex. “Jackie’s experience of institutionalizing acceptance and engagement with transgender persons was similarly encouraging. I hope to see more institutions, [both educational and corporate,] embracing the diversity of perspectives and experiences that help make our community as strong as it can be.”

Commenting on the discussion, Heather McCormick, manager of budget operations, FAS Office of Finance, said, “Both speakers were inspiring and successful in starting an important conversation here at Harvard around transgender inclusion. There is so much confusion around what it means to be transgender, which can be a roadblock in allowing people to be truly accepting.

“Hearing Chris’s story firsthand highlighted how much I didn’t understand about the issues facing the transgender community, and I appreciated having this opportunity to become more educated and informed on the topic, “ she said.