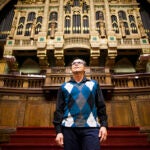 For law students, a cautionary tale

Inside the struggle to protect transgender inmates from abuse

But far from the headlines, another transgender community is pushing for rights with limited success. And the consequences can be dire.

Much of Strangio’s talk centered around the Prison Rape Elimination Act (PREA), legislation unanimously passed by Congress and signed into law by President George W. Bush in 2003. Strangio called the law a “major step in acknowledging that sexual violence is unacceptable,” and said it reflects the concerns of incarcerated people and advocates important reforms such as separate showers for transgender prisoners, and a ban on housing transgender people in units based only on their genital characteristics. But, he added, the law falls far short on enforcement.

“The only enforcement mechanism for PREA, is a … mechanism in which the agencies are subjected to audits,” he said, “and the only risk is that they lose 5 percent of some strand of federal funding. But they also have something like 300 ways to avoid losing the 5 percent.”

“The idea that sexual violence could be eradicated suggests that you could have prison without sexual violence. But that of course cannot be reconciled with what we know about the operation of the prison regime itself as a mechanism of sexual violence and sexualized and racialized social control.”

Quoting prison rape survivor and antiviolence activist Stephen Donaldson, Strangio said, “There is ultimately no prison rape issue, there is only the prison issue.”

The talk last Thursday was part of a yearlong gender and sexuality seminar titled “Arresting Violence | Reconceptualizing Justice” sponsored by the Mahindra Humanities Center at Harvard and the Committee on Degrees in Studies of Women, Gender, and Sexuality. For the past three years, the committee has focused its seminar series around a theme, such as the impact of romantic same-sex relationships on American democracy, or the future of the LBGT movement after same-sex marriage.

This year’s theme, said Michael Bronski, professor of the practice in media and activism, who helped organize the seminar, explores “what would a feminist or queer sense of justice look like, since that’s not how the federal government thinks about justice.”

Strangio’s work has challenged him personally and professionally. He trained correctional officers at Rikers Island in New York on how to work with transgender inmates as part of a campaign to keep the prison’s transgender unit open until pushback from officers against allowing inmates to choose the gender of the guard who searched them made him drop the topic from his training.

“I made a decision,” Strangio said, “not to push harder.

“As much as you may push back on these systems, the system also pushes back on you,” he added, acknowledging that the system “has changed me more than I have changed it.”

Still, despite the setbacks, the frustrations, and the slow progress, the work is critical, said Strangio.

“There are no cost-free projects, but it doesn’t mean to me that we do nothing, and it doesn’t make us bad people for screwing up,” he said. “For me, it just means that we can’t be intoxicated by ideas of progress or access, we can’t let what we think of as legitimate get in the way of our aspirations to be transformative … we must always be finding ways to be close to people who are under the most direct forms of state control, and make visible the violence.”

The next talk in the series, “Examining Perceptions and Representations of Black Women,” will be with Kristin Nicole Dukes, an assistant professor of psychology at Simmons College. It will take place in the Barker Center, room 133, on Feb. 18 at 5 p.m.