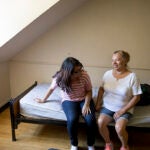 The Yard awakens as freshmen arrive

The incessant public drumbeat that “government is broken,” or at least inefficient and ineffective, has long been a popular and politically expedient way to justify ideologically driven policy shifts and budget cuts, or simply to discredit new ideas.

As partisan gridlock at the federal level continues to stymie efforts to accomplish much of anything of national import, state and local governments have embraced the idea that government should identify new tools and solutions that can enhance and expand the way it delivers results for its citizens and improves people’s lives. The stumbling block is often getting the proper training and finding the necessary money and political will to implement change.

To prove that government can, in fact, work and be a positive force, Harvard and Bloomberg Philanthropies, the charitable foundation of businessman and former New York City Mayor Michael Bloomberg, M.B.A. ’66, today announced a trailblazing new collaboration to develop and further leadership, management, and innovation in cities across the United States and the world.

Thanks to a $32 million gift, about 300 mayors and 400 of their senior staff members will be invited over four years to participate in the Bloomberg Harvard City Leadership Initiative, a comprehensive, year-long executive education program developed and taught by faculty from Harvard Business School (HBS) and Harvard Kennedy School (HKS).

“This is a vitally important opportunity to advance the understanding of urban issues and to work with mayors and other public officials to bring discoveries from University research into communities across the nation and around the world,” said Harvard President Drew Faust in a press statement.

Select mayors and some of their top aides will spend three days at the Bloomberg campus in New York City discussing their challenges, sharing information, and learning about the latest ideas and interventions from Harvard faculty and Bloomberg Philanthropy experts. They’ll reconvene each quarter via HBX Live, HBS’ online learning platform, to continue the dialogue and provide progress updates. They’ll also be able to take advantage of ongoing support throughout the year, such as from Harvard student interns, while gaining individualized executive coaching from former mayors. 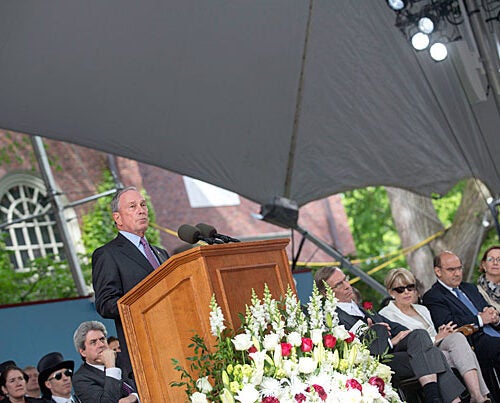 The partnership ushers in “a new era” in HKS’ longstanding work with cities and will “transform” its ability to help mayors and other city officials run their governments more effectively, said Dean Douglas Elmendorf.

“The mission of the Kennedy School is to reach out into the world, and we are often frustrated by limitations on how far we can reach,” he said. “This tremendous gift gives us an opportunity to reach much further.”

“The major cities of the world are now the hubs of economic activity and social mobility in most countries, including the United States, and so the opportunity to work with the Kennedy School to help develop these leaders to realize the full potential of cities is a remarkable thing,” said HBS Dean Nitin Nohria.

“This idea of the ‘tri-sector leader,’ a person who knows how to travel between business, social enterprise, and the public sphere, is a very important idea,” Nohria said. “Having the Business School be a part of this in partnership with the Kennedy School will create the kind of education that will really be of greatest benefit to these mayors.”

For those mayors who already know that change is possible, the program will help them find the right tools to address nagging issues or identify interventions that can help head off a quandary, such as abandoned real estate, before it becomes a major headache. For those officials uncertain about what can be achieved, the goal is to show them that meaningful and measurable reform is within reach and allay their worries that there’s too little time or money to investigate and implement new ideas or train employees to test fresh solutions.

“We want to help those mayors who really want to make change but lack the capacity or haven’t been exposed yet to some of the techniques and tools, but are eager to make a change. Most cities are severely understaffed and underfunded. But at the same time, it’s where change is most tangible and visible, so we want to fill that gap,” said lecturer Jorrit de Jong, who will serve as the initiative’s faculty director. He is currently academic director of the Innovations in Government program at HKS’ Ash Center for Democratic Governance and Innovation, where the initiative will be housed on Harvard’s campus.

‘Most cities are severely understaffed and underfunded. But at the same time, it’s where change is most tangible and visible, so we want to fill that gap.’ — Jorrit de Jong

“Whatever you do with innovation, it’s not supposed to cost more money, it’s supposed to use the limited resources you have more cost-effectively and maybe stop programs that aren’t producing a lot of value or eliminate deficiencies in your system so you can spend more money on the stuff that does matter,” he said.

With research projecting that most of the world’s population will live in a city in the next two to three decades, helping mayors and their top aides improve city life has an immediate impact on citizens not typically found at the state, regional, or national levels.

“You’re closer to the people who are affected by policy, [and] they’re closer to you so their protests are louder and you’re much less able to” use social issues for purely ideological purposes, said de Jong. “Because at the end of the day, if the sewer doesn’t work or if the garbage is not collected or the schools don’t function, you’re going to hear it very soon, and they know how to find you, and you’re going to be held accountable.”

Unlike other programs that offer a brief, seminar-like experience for city leaders, the initiative will also provide a rich array of opportunities and benefits for Harvard students and faculty. The gift will fund fellowships to allow students to work in mayoral offices during the summer and get vital hands-on experience.

“By giving them an opportunity to work in a mayor’s office, we do two things. We give the student an experiential learning opportunity, but we give the city pro bono, high-quality support throughout the summer, [someone] who can help implement an innovation or identify good practices that the city might benefit from,” said de Jong.

In addition, students will be able to sign up for field courses modeled after the Innovation Field Lab, in which de Jong teaches; do data analytics, policy design, business process redesign, and service design; or analyze specific social and economic conditions that affect a city. “It’s a very concerted effort to have students work on an actual issue and make progress on that and learn on the job,” he said.

Students may also be involved in conducting “horizon scans” for mayors who have a particular issue such as economic development they’d like researched, or who need some data analysis done, or who want to learn how to use technology better. Student teams under the supervision of faculty will investigate and analyze solutions being used elsewhere to help mayors adapt them to suit their municipalities. It’s work that city administrators don’t often have time to do, but from which they would really benefit. And it allows students to learn about the pressing issues in government, and what the latest ideas and best practices are, while seeing how cities struggle toward answers.

The initiative will provide faculty with a deep reservoir of important data and a unique chance to capture new knowledge about governance, leadership, and urban problem-solving from the sustained interaction between practitioners and academics. It’s information that, when merged with existing knowledge, will boost cutting-edge research, help formulate new curricular materials, including new case studies, and further the understanding of cities. Much of those materials will be made open-source so others can benefit and build on that work.

“We’re very excited about actually digging in and really trying to understand all the challenges of this leadership role and what we can learn from people who are engaging in it,” said Nohria, noting the success of an earlier, deep collaboration with Harvard Graduate School of Education around school superintendents and leadership. “That turned out to be an extraordinarily rich project that led to many case studies, books, and papers, so our hope is in some ways this project will do the same.”