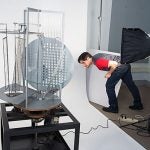 Michael Puett, the Walter C. Klein Professor of Chinese History, has taught thousands of undergraduates in his course “Classical Chinese Ethical and Political Theory,” inspiring many who have later confided to him that the experience prompted significant life changes.

“They come back constantly, saying, ‘I thought these four years were about finding myself and discovering what I’m good at,’” he said. “They realized it’s a different question. It’s about exploring all the things that can help them grow, and they start leading a very different life.”

With his new book, “The Path,” written with local author Christine Gross-Loh, Puett wanted to bring the beliefs of philosophers such as Confucius, Mencius, and Laozi to a wider audience. The result — a best-seller — confirms he was onto something.

“There’s such a hunger out there,” said Gross-Loh. “There’s an idea our current ideas have let us down. People are looking for something new, and, ironically, are finding that the ideas that resonate with them are actually very old. Part of why it’s been published so widely [in 25 countries] is that there is no book out there that explains Chinese philosophy in an accessible way.”

While Puett’s course, which has the third highest enrollment among undergraduate classes at Harvard College, covers a range of theories, “The Path” is focused on a small group of philosophers whose ideas stand in sharp contrast to accepted notions in contemporary society. While many of us think that knowing ourselves is key to a liberated life, Confucius would say that, in fact, we “risk building our future on a very narrow sense of who we are — what we see as our strengths and weaknesses, our likes and dislikes,” the authors write.

In a recent interview over coffee at Crema Café, Puett expounded on Confucius in terms his undergraduates can understand, explaining that “many students just grew up thinking to live a good life, they should look within, find their true self, be sincere to that true self, and live life according to that self, making decisions based on who they think they are.

“All that sounds great, but Confucius confronts them with ideas that this way of looking at our lives is not just wrong, but constraining. When we look within that way, we’re actually just looking at a snapshot in time. What if, on the contrary, we are just messy people who have fallen into patterned responses from a very young age? If so, then who ‘I’ am is really nothing more than a set of passive responses and patterned ruts. Confucius encouraged a different way of approaching our lives, by using rituals to break these patterns, in order to become a better person.”

Puett cited himself as case in point, recalling his study of classics in high school. He noticed that the classical canon was exclusively from the West, so he began searching for materials from other parts of the world, including China.

“But, actually, I use myself as a negative example,” he said. “I could have shifted gears beginning in 10th grade when I was reading these Chinese thinkers who fascinated me, but I had this clear vision of who I was and who I should be. I kept learning European languages and philosophy, and thinking about China only on the side. In college, I even went so far as to apply to graduate school to study Western history. On the evening before I had to reply to these schools, it dawned on me: I didn’t want to do this; I wanted to study Chinese.”

He added: “It’s by working against the idea that you’re a defined person that you open yourself up to possibilities that transform you.”

The very idea of changing relationships and life plans can be daunting, but Gross-Loh, who received her Ph.D. in East Asian history from Harvard in 2001, said that Chinese philosophy encourages readers to think of change as incremental.

“We think of life changes as grand gestures, but they aren’t really,” she said.

She said she often encourages her four children to do things outside their comfort zones, regardless of whether the new activity yields immediate or obvious success.

“There’s so much pressure on kids now to plan ahead, and not make any missteps,” she said. “I want them to keep stretching and growing, and to cut against what our society tells them they should do.”

She pointed to the quintessential Daoist text of Laozi, and its belief that being soft and weak are virtues that paradoxically lead to strength.

“We usually think that if we’re dominating or controlling a situation, we’re being strong,” Gross-Loh said. “But the Laozi says the entire world is based on endless connections. If everything is based on connections, in the long run bombastic domination will defeat what you’re trying to do.

“Think of water rather than a stone. What you want to be is supple and ever-shifting. It’s very counterintuitive and yet really profoundly right.”

It’s also incredibly practical, said Puett, who tells the young minds sitting in the packed benches in Sanders Theatre every fall to take classes that make them uncomfortable.

“You do not yet know where your life is going to go. You don’t know who you are.

“Do things that don’t feel like you, because the act of living that way will open up possibilities you couldn’t imagine,” he said.